The second sequel to one of the most loved game series is coming, all thanks to a hugely successful kickstarter.
With a target of $2,000,000, the Shenmue III kickstarter not only hit it’s target but even surpassed it in only a few hours of being launched.
Currently sitting at $3,201,562 as I write this…and still climbing. This is living proof of how popular Shenmue really is.

But before we talk about Shenmue III, let’s have a quick refresher on what Shenmue was/is and catch up with the story so far…

Shenmue: Was the brainchild of Sega legend Yu Suzuki and the Sega AM2 development team. Released on the much loved Sega Dreamcast in 1999.
A martial arts inspired RPG with a (at the time) amazing world to explore and interact with along with some of the best character models seen.

Beginning in the winter of 1986 in Yokosuka, Kanagawa, Japan. With you taking on the role of Ryo Hazuki, who returns home and witnesses his father, Iwao Hazuki, battling with a man known as Lan Di.
Lan Di orders Iwao to hand over the “Dragon Mirror” and when Iwao refuses. Ryo intervenes after his father is felled in combat, but Ryo ends up getting injured by Lan Di. Ryo is threatened with death which prompts Iwao to reveal the location of the “Dragon Mirror” underneath a nearby cherry blossom tree.

Lan Di’s henchmen recover the mirror and Di mentions a man called Zhao Sunming, who he says was killed by Iwao in Mengcun. Lan Di and Iwao Hazuki engage in combat. Iwao Hazuki is defeated and Lan Di allows Iwao to die “like a warrior”. Lan Di then finishes the fight with a fatal blow and leaves.
Iwao dies in Ryo’s arms shortly after, which fills Ryo with the desire for vengeance. After a few days of mourning and resting up from his injuries, Ryo begins his journey to track down Lan Di to avenge his father’s death.

Ryo’s first clue is a black car that some of his neighbors saw on the day of his father’s murder.
Though his leads are thin on the ground, Ryo slowly makes progress in his investigation by interviewing people all over Yokosuka…and asking for sailors. Just as he is about to run out of leads, Ryo discovers a letter from a man named Zhu Yuanda which suggests that he should seek the aid of a certain Master Chen, who works at the New Yokosuka Harbor.
Through Master Chen Yaowen and his son Chen Guizhang, Ryo learns that a local harbor gang known as the Mad Angels is connected to Lan Di’s crime organization, the Chi You Men. Ryo also learns that the “Dragon Mirror” stolen by Lan Di is part of a set of two stone mirrors. After further investigation, Ryo locates the second mirror underneath his father’s dojo, dubbed the “Phoenix Mirror”.

So Ryo takes on a job at the New Yokosuka Harbor in order to find out more about the Mad Angels gang, and eventually he causes enough trouble that the gang kidnaps his friend and love interest, Nozomi Harasaki. Ryo rescues Nozomi, but makes a deal with the Mad Angels leader, Terry Ryan, to beat up Guizhang in exchange to take Ryo to Lan Di.
Ryo fights Guizhang in a grueling battle, but after realizing Terry betrayed him by attempting to kill them, Ryo then teams up with Guizhang to defeat the seventy strong members of the Mad Angels gang.
Upon defeat, Terry reveals to Ryo that Lan Di has left Japan for Hong Kong. With the aid of the Chen family, Ryo is arranged to take a boat to Hong Kong to track his father’s killer, Lan Di. On the day of his departure for Hong Kong, Ryo is suddenly attacked by Chai, a low ranking Chi You Men member who has been following Ryo throughout the game with the goal of acquiring the “Phoenix Mirror” to gain the favor of Lan Di. Chai injures Guizhang’s leg when Guizhang saves Ryo from getting crushed by a giant steel beam sent by Chai.
Ryo engages in a battle with Chai and bests him. Guizhang, who planned to accompany Ryo to Hong Kong, urges Ryo to go ahead without him so he could rest up and heal from his injury. Ryo is instructed by Master Chen to seek out the help of a master of the Chinese martial arts located in Wan Chai named Tao Lishao.
Ryo boards the boat alone and sails off to Hong Kong in pursuit of Lan Di, concluding the first chapter of Shenmue.

Shenmue II: Made by the same team as the last game and relased in 2001 for the Sega Dreamcast and later ported to the Xbox.

Picking up from where Shenmue left off, Ryo arrives in Hong Kong and searches for Master Tao Lishao, as he was instructed to do by his friend, Master Chen Yaowen. After a long and difficult search, Ryo finally finds Master Tao Lishao, who as it turns out happens to be a woman named Hong Xiuying; but she is unwilling to assist Ryo in what she considers a futile quest for vengeance.
The two part ways, but Xiuying continues to watch Ryo’s progress and they continue to cross paths throughout the game. Ryo later discovers another individual, Ren Wuying, who may be able to assist him in locating Zhu Yuanda. Ren Wuying is the leader of a street gang named The Heavens. A young boy who holds Ren in high regard named Wong and an adventurous woman named Joy also befriend Ryo and assist him in his investigation.
Ren decides to assist Ryo in his quest after discovering that there are large sums of money tied up in the mysterious and ancient “Phoenix Mirror”. Ren also informs Ryo that Zhu Yuanda is hiding in Kowloon.

Ryo arrives in Kowloon and begins his quest to locate Zhu Yuanda, who is hiding there from Lan Di and the Chi You Men. Several confrontations ensue between Ryo and his allies and the dangerous Yellow Head organization, who are aiming to kidnap Zhu Yuanda on behalf of Lan Di.
Following several clues, Ryo and Ren finally find Zhu Yuanda; however, the meeting is cut short when they are ambushed by the Yellow Head leader, Dou Niu. Zhu is kidnapped but eventually Ryo discovers that Zhu Yuanda is being held at the Yellow Head Building. Ryo heads to the building to save him, along the way, Wong and Joy are captured.
Ryo saves Joy via a fight against a powerful martial artist named Baihu. Joy tells Ryo that Wong is taken to the 40th floor of the Yellow Head Building.
Ryo arrives at the rooftop of the building and discovers Lan Di hanging from the ladder of a helicopter. But before Ryo could attempt to engage with Lan Di, he discovers Dou Niu holding Wong hostage. Ryo saves Wong and engages with Dou Niu in a climactic battle with Lan Di looking on. Ryo eventually defeats Dou Niu and is able to prevent Lan Di from receiving a captured Zhu Yuanda, but Lan Di escapes.
Everyone gathers at Ren’s hideout, Zhu Yuanda reveals to Ryo that the reason Lan Di killed his father was that Lan Di believed Iwao killed his father, Zhao Sunming. It is also revealed that Lan Di’s real name is Zhao Longsun. Zhu also provides information regarding the true purpose of the “Dragon” and “Phoenix Mirrors”. The mirrors will lead to the resurrection of the Qing Dynasty.
Ryo is advised by Zhu to continue his search in Bailu Village, located in Guilin and that Lan Di is headed there as well. Ryo parts ways with Ren, Wong and Joy as he continues his journey to Guilin alone.

After shortly arriving in Guilin, Ryo encounters a young woman named Ling Shenhua. She previously appeared to Ryo through several dreams throughout the first game. As the two talk, Shenhua reveals her family is connected with the legacy of the “Dragon” and “Phoenix Mirrors”.
Shenhua leads Ryo to a quarry on the outskirts of the village to meet with her father, but he is nowhere to be found.
The game ends in a cliffhanger, with Ryo and Ling discovering a cryptic note and sword, which Ryo combines with the “Phoenix Mirror” and inadvertently sets off a device revealing a huge depiction of the two mirrors. 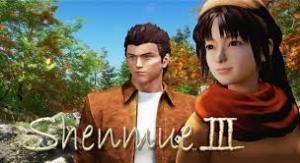 Shenmue III: Is going to be directed by Yu Suzuki and said to pick up and resolve the cliffhanger from Shenmue II and finally finish the story the fans have been waiting 14 years to see.
Set to be relased on PC and Playstation 4 with an estimated release date of December 2017. (seems a bit “optimistic” if you ask me)

Shenmue III’s kickstarter is great news as Yu Suzuki is asking for feedback from the fans, so we could shape the way Shenmue III turns out.
Even though the target has been suppased, it’s still very much worth investing as there are still plenty of pledges available and the more money this kickstarter gains…the more can be spent on the game.