That was a rough journey.
From imaginative and unique cult classic to a big lump of excrement with nothing of any real worth in between.

I honestly can not think of a worse, most mistreated movie franchise.
Don’t get me wrong, there are some truly horrible movie franchises out there with some bad sequels along the way. But even some of the worst have one or two films in the series that are okay at best. Highlander has nothing.
The first film was great, yet everything that came after it was terrible.

Its a big and popular franchise too, there is much more than the films I mentioned here.
Highlander is a franchise that has spawned not only a film series. It has three TV spin offs, one animated and two live action. Several comic books and even a novel series with a fair amount of books. Plus it spawned two video games.
Yet despite it being a big franchise, its treated with no respect at all.

Now I can only speak of the franchise from the point of which I have been exposed too it.
I did say I tried the first TV spin off and didn’t like it much.
I remember the animated show too that was aimed at kids…yes, this franchise that revolves around immortals having thier heads cut off had a kids cartoon.
I did watch a couple of episodes from the other TV spin off, The Raven…that was unpleasant.
I have not read the comics nor any of the novels.
I did play both of the games and they were also terrible.

So I have not been exposed to EVERYTHING this franchise has to offer, but I have witnessed my fair share and can safely say there is not a worse franchise out there. 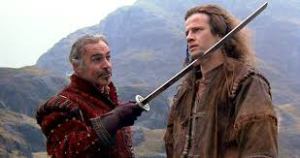 But forget everything that Highlander has to offer. I did say at the start I only wanted to concentrate on the movies themselves. So here is my quick round up of the film franchise.

Highlander: This film is far from perfect and I have a few problems with it. But the characters and mythos created within this film is highly unique, plus it had a great story structure jumping back and forth in time showing Connor through the centuries. Then there is something I’m going to cover in a little more detail later, the soundtrack by Queen.

Highlander II: The Quickening: This film is shockingly bad. Everything set up previously, everything we have learned is thrown out and replaced with aliens and protecting the ozone layer. The plot makes no sense, something I will cover later. The story is pointless and the characters are forgettable.

Highlander III: The Sorcerer: As many claim and an opinion I will mirror. This one is not as bad as the previous film…but its still not a good film anyway. It rightfully ignores the last film and goes its own way. Of all the sequels, this is the only one that is in some way watchable.

Highlander: Endgame: Interesting concept, very poor execution with some asinine writing. I think this one is more for fans of the TV spin off than fans of the original film.

Highlander: The Search For Vengeance: Not seen it yet and I honestly have no urge to either.

Really after all I have seen from what this franchise has to offer. I am convinced that there SHOULD be only one.

Now I’m not trying to say this should never had become a franchise, just that it deserved to had become a better franchise.
When the whole mantra and coda of the first film is, “there can be only one” and how the film ends like it does…you can’t really make sequels can you?

Here’s an idea or two off the top of my head:

Ramírez and The Kurgan seemed to know each other in the first film. There’s a story right there. A prequel covering their discovery of immortality and their previous run ins.

A film that takes place along side the original that covers the other immortals.

How about the literal centuries of years Connor has lived and how much he must have seen and done?

There are a few ideas that maintain the mythos of the original film and don’t involve aliens from Zeist or ozone layer protectors.
There are literally centuries worth of stories and characters they could have explored.

I wanted to point out the many, many problems Highlander II has as a sequel, and here I go.

1: The series is called Highlander because the main character, Connor is originally from the highlands of Scotland…not an alien from planet Zeist. Highlander, there is a clue in the title.

2: Ramírez dies in the first film and is back in this sequel with no explanation as to how other than Ramírez telling Connor if he need him just call out his name. This negates the impact and importance of his death in the first film.

3: Katana’s plan even bothering to kill Connor when he was an old man makes no sense. Connor is literally days away from dying as he is now mortal, so sending back his two cronies to try and kill Connor is pointless. All he had to do was just wait and Connor would be dead soon enough. It is only because Katana did send his minions to Earth that made Connor immortal again.

5: Katana in the film brings up the fact they are forbidden to fight on holly ground. A rule established in the first film. But they are aliens from another planet, why is Earth holy ground forbidden to them?

6: Several times in the film, Katana makes reference to Earth pop culture. The Wizard Of Oz just to name one…they have the Wizard Of Oz (and other Earth based culture) on Zeist then?

7: Ramírez and Connor had never met until the events of the first film and this is made very clear, yet according to this film they have known each other for centuries.

There are more problems, so many more but to be honest I need to move on from this disaster.
But before I leave Highlander II behind, I just want to mention this blurb on the back of the box…

In case you can’t quite make that out it claims that “Highlander 2: the Quickening is the smartest sci-fi thriller since Blade Runner””
I’ll just leave that there.

I’ve been thinking of a way to display how far this franchise has fallen and I think I may have it and also managing to segue into something I really want to talk about, that soundtrack.

Okay, so the following is Princes Of The Universe performed by Queen taken from Highlander:

A great song taken from the soundtrack that still sounds awesome today. Note the strength in Freddie’s voice, the music is brash but still melodic. The lyrics are meaningful to the characters in the film and the plot too.
When you understand Highlander as a film and listen to the music, you realise that the music is a massively important part of the storytelling.

Now, here is that same song performed by somebody else (don’t care who, does it matter?) taken from Highlander: The Source:

Yeah terrible is it not?
That auditory molestation of your ears describes perfectly what has happened to this franchise far better than I ever could with words. Its bland, tasteless, banal and insulting. From Queen to whatever that ‘noise’ was, I can add nothing more.

But before I finish up. I would like to talk about the amazing soundtrack from the original film. As superb as it is, did you know there never was a released Highlander soundtrack album?
Many films will eventually have a soundtrack released for it, but not Highlander despite it being one of the most loved movie soundtracks ever.

Now I’m not being 100% fair here. While it is true that Highlander the soundtrack was never released. Queen did release an album called; A Kind Of Magic that was pretty much all the music from Highlander…pretty much as Queen’s version of the Frank Sinatra classic; New York, New York is not there. 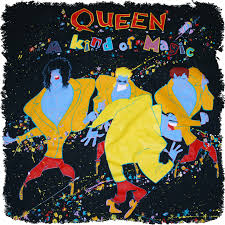 But still the soundtrack to Highlander was/is an excellent and much loved soundtrack.
Each of the main songs has been written specifically for the movie. The lyrics to the songs actually tell a condensed version of what the film is about. Due to this, there is a lot of emotion that can be taken from both the film and music. Its a beautiful melding of movie and music that is unmatched.

For instance; Connor saying goodbye to the love of his life, Heather as she grows old and dies all while Who Wants To Live Forever plays in the background is a truly great scene.
Or The Kurgan blasting; Gimme The Prize out of the tape player in his car while out hunting for immortals to kill.
The opening of the film during the wresting match that Connor is watching that reflects on the fights and battles he has seen over the years. All while; Princes Of The Universe is playing.
Brenda sitting on the bar as the mysterious Connor buys her a drink with; One Year Of Love playing in the background which says a lot about Connor’s relationships upto that point and even foreshadows their relationship for later in the film.

The soundtrack by Queen is pure genius with amazing music and lyrics that are just as much a part of the movie as everything else is.
Highlander is a great film, far from perfect. Yet the soundtrack is just that…perfect.

This franchise tarnished all of that.
The whole series should have taken The Kurgan’s advice: “It’s better to burn out than to fade away.”

Yeah, there can be only one. 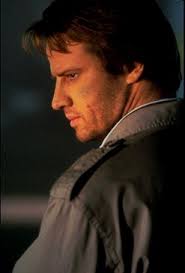 Connor MacLeod: “For you, my bonny Heather: Happy birthday. And you, Juan Ramírez: Take care of her, you overdressed haggis.”