A good while back now, I played and reviewed HyperParasite from developer Troglobytes Games (buy it, it’s awesome). Over 2 years since it was released in 2020, I still enjoy having a blast now and then. I became an instant fan of the studio and have been eagerly awaiting their next title. Blind Fate: Edo No Yami (published by 101XP) is that new title and it is one of the main games that I have been really, really looking forwards to this year. Now I have played it, was it worth the wait?

“Dive into a world that mixes Sci-Fi and ancient tradition. Slash through robots with a trusty katana, use hi-tech implants to navigate the surroundings, dodge enemy attacks, and land devastating finishers. Reclaim the past following the way of the Japanese samurai in the fantastic period of New Edo.”

So then, what is Blind Fate: Edo No Yami all about? You play as a cyber-samurai called Yami, in what is basically a scrolling hack ‘n slash game. Oh yeah, you are blind too. See, it was this concept of playing as a blind character that really piqued my interest. Video games are a visual medium and blindness is a pretty huge obstacle to overcome. How do depict playing as a character that can not see, in a video game where seeing (from a character’s point of view) is paramount? I think this would be the best place to describe how Blind Fate: Edo No Yami works. 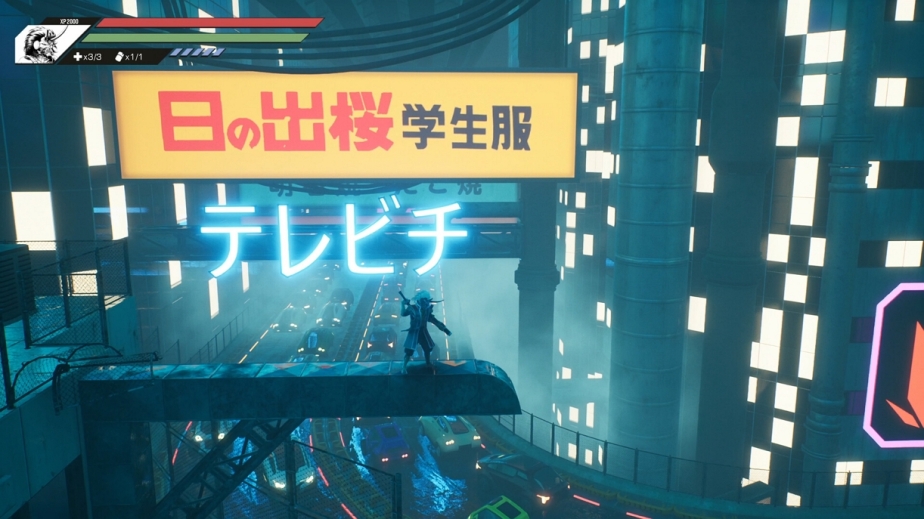 As Yami is part-cybernetic, he has certain machine-based skills. For instance, you don’t have human senses per se, you have sensors. These sensors can be selected, on the fly, as you play and they are used to pick up sound, heat and smell. Different enemies can and will be shown when you use these sensors. Most enemies make a sound when they move, so you’ll know where they are because you can hear them. If an enemy has a gun and fires it, the heat from the barrel will give away where they are, and so on. Once you hit an enemy, they will remain visible for a while, so you can see them more clearly. Leave it too long between hits though and your blindness will make them disappear.

The blindness also works with the levels themselves. You are given data of the area that you are in, as a way for you to ‘see’ your surroundings. The only problem is that, a lot of the time, that data is outdated. This means that not everything that you see (or don’t see) is necessarily there… or not there. This is why you need to find more up-to-date data of your surroundings to fill in certain gaps. I mean, you can walk into an area that is completely corrupt and the in-game graphics will show that corruption too. But, find some data, it is uploaded into your cybernetic brain and you’ll have a far better visual of your surroundings. The collection of data applies to the enemies too. The more you have on them, you more you know about them and the easier they become to see. 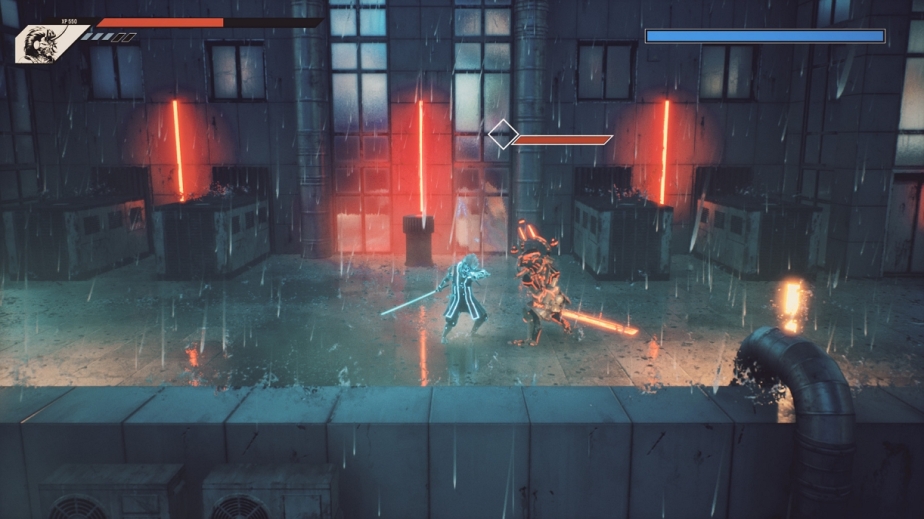 Seriously, how Troglobytes Games have implemented the idea of blindness is pretty damn unique. There’s a brilliant touch that explains how it all works at the very start of the game. You have an AI guide called Tengu, which tutorials you through the opening and explains how your blindness and vision works. In the first area, it is raining, but the raindrops do not move, they are static and stuck in the air. The rain does not move because the data you have been given is static, so your cybernetic system produces it as static. You don’t have information on how the rain is falling, just that there is rain. The game is full of little details like this.

But enough about the implementation of blindness, how does the game actually play? Well, as I said earlier, this is a hack ‘n slash title. You know the score, scrolling levels, hit enemies and take out bosses. You have the standard light and heavier ranged attacks, a dodge/roll and a block/parry. But don’t let the simplicity of the mechanics fool you, there is some depth to the hacking and slashing. You have the usual combos, but if you land so many hits, you will reveal a weak spot on your enemy. This opens up for a powerful attack based around your sensors, which you’ll have to switch to in mid-combo. You can also perform devastating finishing moves with some pretty awesome-looking animations.

In terms of the combat, Blind Fate: Edo No Yami starts out really bloody hard. You know how games usually have a difficulty curve that slowly increases? You don’t get that here, you get a difficult game from the off. A lot of that difficulty is tied into the fact that you are blind and can not see your enemies, at first. As I mentioned earlier, the more data that you collect, the more visible your enemies become. Coupled with the upgrades and skill tree, Blind Fate: Edo No Yami is a game whose difficulty curve seems to work in reverse. The more you play, the more you learn about your enemies and the more you unlock skills and upgrades, the easier it becomes. Don’t get me wrong, this never becomes an easy game, it just gets easier while still maintaining a high difficulty.

You can’t just go running in and start smacking the attack button as if you are playing Golden Axe. Well, you can but you just won’t last very long. Blind Fate: Edo No Yami isn’t that type of hack ‘n slash game. The fights here are a tad more methodical and precise. You have to learn your enemies’ attacks, pay attention to their patterns and strike only when you know there is an opening. When there are multiples of different enemies on the screen too, that can get a little ‘hectic’. Boss fights can be punishing if you are not adequately prepared and you will die… a lot. 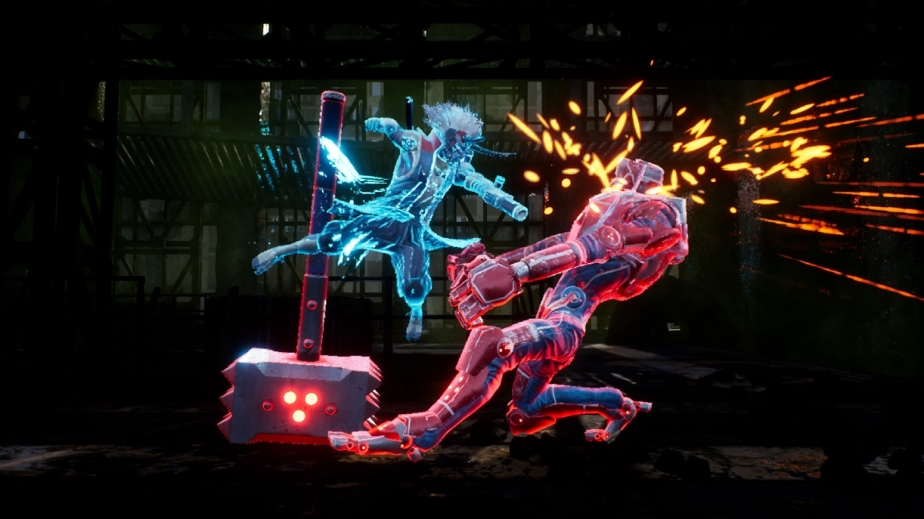 The high death count is something that I can tell, will frustrate some players. That early difficulty spike is a rough hill to climb and I am willing to bet that it will put a lot of people off. For me though? Yeah, it was hard, sometimes unfairly so. But I kind of liked it and when I did finally overcome a particularly tricky spot and the sense of achievement when taking out a boss, that had already killed me several times over previously, was immense.

There is a story, that I’m not about to spoil here. But you do find out how and why Yami became cybernetic. The game jumps back in time throughout the evolving plot as fills you in on your character’s history. Dialogue between characters can sometimes be pretty funny, especially with the previously mentioned AI guide, Tengu. Then there are some stylish cutscenes as you progress which fill out the story nicely. Good voice acting is backed up with some great and very authentic sounding music to give the game Blind Fate: Edo No Yami a nice bit of presentation. And yes, you can pet the dog. 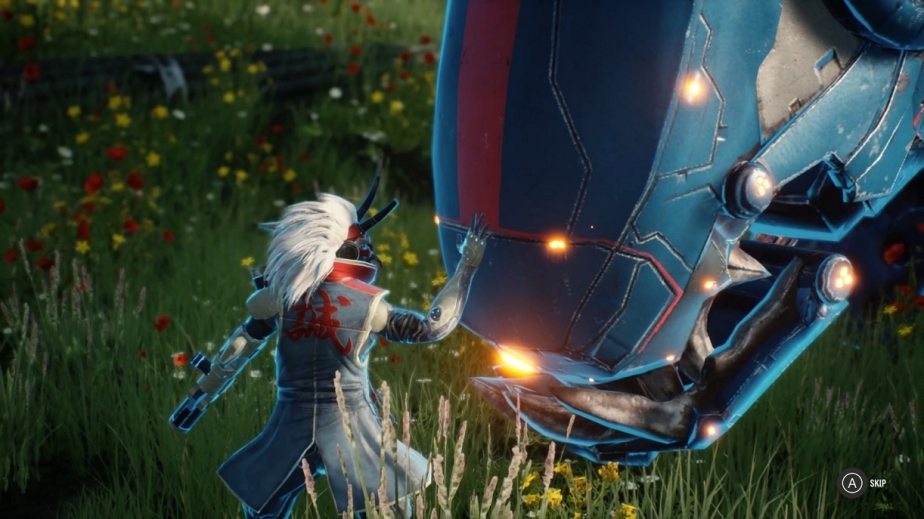 Priced at around £17 and is available on everything right now. To answer my query in the intro of whether Blind Fate: Edo No Yami was worth the wait? For me, yes. But I can tell you now that this is going to be a game that some people will not enjoy. It can be frustrating and it can be unfairly difficult a times too. I don’t know, maybe I was just in the mood for a game that would quite happily slap me around the face and then expect me to thank it for the honour too? There’s a slight Metroidvania angle in that, unlocked skills can open up previously unexplored areas. Your sensors can be used to find secrets and alternate routes. There’s really a lot packed into Blind Fate: Edo No Yami and plenty to enjoy. You just need the patience to get past that opening difficulty spike.

There is a demo available. That might be a good idea to check out before you decide if you’re going to give this a purchase or not. Oh, almost forgot to mention. I’m in the credits for this one.