To a lot of people, the name Harold Ramis won’t really won’t be too familiar.
But to many others, the name is one of the best comedy writer/directors of the 80s and 90s and also did a bit of acting along the way too.

While the name may not be one that stands out to some people, maybe one of his many acting roles would.

Yes, Harold Ramis played Dr. Egon Spengler from Ghostbusters.
But Ghostbusters is jumping ahead a little, so before I get too far ahead of myself, allow me to get back to the beginning and remember Harold Ramis correctly.

Born Harold Allen Ramis on November 21, 1944.
Harold was part of a group of comedians that all worked together that became known as The Second City improvisational comedy troupe in the 70s. With the likes of John Candy, Bill Murray, Dan Aykroyd, John Belushi among many others.
They were a comedy troupe that were taking American comedy into a new direction.

Ramis even became a joke editor for Playboy magazine.
Then in 1974 John Belushi brought Harold Ramis and other Second City performers, including Bill Murray, to New York City to work on The National Lampoon Radio Hour.
In 1976 Ramis became a performer and head writer of the late-night sketch-comedy television series SCTV.

Ramis eventually left SCTV to pursue a film career and wrote a script which would eventually become National Lampoon’s Animal House. Which went on to become the biggest comedy film of 1978.

Ramis next co-wrote the comedy Meatballs, starring Bill Murray and marked the start of a long term friendship between the two. His third film as a writer and his directorial début was Caddyshack relased in 1980.

Caddyshack went on to become one of the most loved comedies of the 80’s and once again featured Ramis friend, Bill Murray.
So what was next for Harold? In 1984, Ramis collaborated with Dan Aykroyd on the screenplay for Ghostbusters as well as it’s sequel, Ghosbusters II in 1989 in which he also acted alongside his friend Bill Murray.

Written and directed by Harold Ramis, as well as making a cameo too. Groundhog Day is one of the very best comedy films of the 90’s

Alas, the Ramis/Murray friendship soured in the later years. In fact one of the main reasons we never got a Ghostbusters 3 was due to Ramis and Murray falling out in the mid 2000’s.
A friendship that was never fully repaired.

Ramis also wrote and directed the Robert De Niro and Billy Crystal starring Analyze This and its sequel Analyze That from 1999 & 2002 respectively.

In 2010, Ramis contracted an infection that resulted in complications from autoimmune inflammatory vasculitis and lost the ability to walk. After relearning to walk he suffered a relapse of the disease in late 2011.

Harold Ramis died of complications of the disease on February 24, 2014 he was 69. 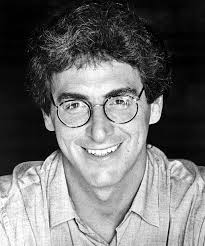 Harold Ramis: “Well, for me, it’s the relationship between comedy and life – that’s the edge I live on, and maybe it’s my protection against looking at the tragedy of it all. It’s seeing life in balance. Comedy and tragedy co-exist. You can’t have one without the other. I’m of the school that anything can be funny, if seen from a comedic point of view.”