With Midway no longer a part of the Pac-Man franchise in terms of development, it was upto Namco to carry on this franchise and hopefully breathe new life into Pac-Man and his legacy.

Pac-Land: Released in August 1984 by Namco we got to experience Pac-Land. A radical departure from the classic maze based games Pac-Man had become famous for. Now Pac-Man is platform based and inspired by the Pac-Man animated series produced by Hanna-Barbera.

The concept behind Pac-Land itself is for Pac-Man to get a fairy to safety by taking back to Fairyland and then returning home, split into “trips”. These trips involves Pac-Man moving from left to right avoiding various obstacles such as the classic enemy ghosts, water spurts, even quicksand traps and water.
Each trip is divided into a number of rounds, the end of which provides Pac-Man with bonus points depending on how much time he has left and also his position in jumping at the end of each round.

The penultimate round of a trip ends with Pac-Man entering Fairyland and returning the fairy to the Fairy Queen. Then the Fairy Queen awards Pac-Man with a pair of magic boots. The final round of the trip has Pac-Man trying to return home by traveling back the way you came from right to left. Pac-Man can use the magic boots the Fairy Queen gave him to jump repeatedly while in mid-air. Once Pac-Man completes the trip and returns home, he is greeted by Ms. Pac-Man, Baby Pac-Man and even Pac-Man’s cat and dog in the cartoon series, Sour Puss and Chomp-Chomp.
Pac-Man then begins his next trip following the same objectives as before, although the difficulty increases.

There are still power pills to eat so you can chase the ghosts. The Galaxian ship makes another appearance in the form of a bonus for extra points.
You could also find hidden bonuses in the game like; pushing a certain obstacles in the opposite direction (at the risk of the ghosts getting you) can give extra lives, invincibility, and balloons to collect for points or even reveal warps. Eating ghosts in a certain order will give extra time.

Pac-Land was a refreshing change and a great game to play. A good, solid return for Pac-Man after the dismal Professor Pac-Man before it.

Namco had hit gold with Pac-Land by bringing back Pac-Man but in an all new concept. What would they have install for our little yellow heor next?

Pac-Mania: Was a return to the classic Pac-Man idea, released by Namco in 1987. Using an isometric view and features many of the elements from the original 1980 Pac-Man arcade game, as well as several new features.

Pac-Mania’s objective is a simple one and one familiar if you had played any of the original Pac-Man games. Clear each stage of pellets while avoiding ghosts, just now using an isometric viewpoint. Everything that worked in the original Pac-Man is here including the power pills.

Pac-Mania brings with it a few new features and significant differences from the original Pac-Man. Most notable was the pseudo-3D, isometric view. Pac-Man can now also jump with the press of a button which would allow Pac-Man to evade ghosts by jumping over them. However, Pac-Man cannot quite so easily jump over the two new green and gray ghosts as they will jump whenever the player attempts a jump.

Pac-Mania takes place in four distinct environments including: a Block Town with a Lego-esque style, Pac-Man’s Park which was the classic Pac-Man look, Sandbox Land in which the walls are made up from pyramids and Jungly Steps which was a maze with no walls but paths resembling a set of steps that rise up toward the back of the maze.

Well received by gamers, Pac-Mania was a return to classic Pac-Man with just enough new features to keep you entertained.

Pac-Man Arrangement: Was a remake of the original Pac-Man game and was released in 1996 by Namco.

Just as with the original Pac-Man, Pac-Man Arrangement was a simple maze game in which the objective is to clear all the pellets by eating them and avoiding the ghosts.
While Pac-Man Arrangement used the basics of the original Pac-Man game, it also added plenty of new ideas to keep you entertained:
There was a new ghost Kinky, which can combine with other ghosts to form more powerful ghosts. These new hybrid ghosts have unique special abilities and would be twice the size of the normal ghosts.
For the second level of every world there are single-use dash arrows on the floor. These would allow Pac-Man to go from one end of the maze to the other rapidly. If you touched a ghost while using one of these panels, they would become dizzy and temporarily stunned. However, if Pac-Man go over the dash arrow in the opposite direction to which it is pointing, Pac-Man would slow down and be left vulnerable.
Each fourth level of each world feature coloured “Warp Gates” that allow Pac-Man as well as the ghosts to travel across the maze. Simply touching a Warp Gate will transport whoever touched it to the corresponding Warp Gate of the same colour on the other side of the map.
There were also additional power up items that would randomly appear. Power ups included; a red power-up which makes Pac-Man move faster, a Pink Power up that would send ghosts into a magic sack within the ghost house and render them temporarily immobile. The Blue Power up makes Pac-Man have his own reflection at the opposite place in the maze that can also eat dots but is immune to ghosts. The mini Pac-Man item gave you an extra life and the magic wand transformed the ghosts in the maze into harmless presents.

The game was split into six different worlds, numbered 0 to 5. Each world had a unique maze pattern, colour scheme, and difficulty level. Each world had four levels within it, except for World 0 which only has two. As you travel from world to world, the ghosts get faster and faster, and Kinky appears more and more.

Pac-Man Arrangement even introduced a boss battle which would appear after you complete Level 4 in World 5. The ghosts Clyde, Pinky, Inky and Blinky all get inside a machine. In this stage, you must avoid the machine and the Kinky clones that the machine throws out while you try to eat all the pellets. Each set of the clones is coloured in the ghosts’ familiar: red, pink, cyan and orange. A bomb would appear that when eaten, will destroy all clones of a certain colour. The first bomb destroys all the red clones, the second one destroys the pink, and so on up to the orange. When the final orange clone was dealt with, the machine with the ghosts still inside then places a new set of green pellets on the maze. These new green pellets are not eaten by Pac-Man but instead as you pass over them, they are launched at the machine and damage it. After so much damage from the pellets, the ghosts inside the machine start turning blue. Once all four of the ghosts turn blue, the machine starts whirling about the stage. Once all the pellets are eaten, a Pac-Man icon appears. Eating the Pac-Man icon destroys the machine and the game ends.

Pac-Man Arrangement was an interesting new take on the classic Pac-Man formula and was a fun game to play.

What came next was not to be expected at all. 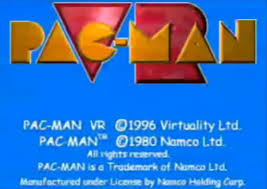 Pac-Man VR: This was not what anyone expected or even wanted. Released in 1996 during that mid 90’s obsession with Virtual Reality. Pac-Man VR was exactly what is sounds like, a Virtual Reality Pac-Man developed by VR company Virtuality.

I really have very little to say about this one, even less than Professor Pac-Man.
It’s a VR Pac-Man game, I never liked the VR concept and still do not.

It was released in the arcades and failed miserably…probably due to the ridiculous cost to play the game. At $5 for just five minutes of play, people didn’t want to pay that much to play Pac-Man…and that is all it was, Pac-Man. No new features or ideas, just Pac-Man in VR.
This was about as good an idea as Nintendo’s Virtual Boy.

So putting that horrible mess behind us, lets move onto the (so far) final Pac-Man arcade game. 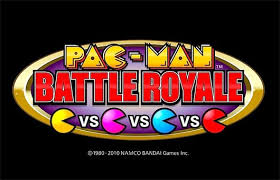 Pac-Man Battle Royale: Hit arcades in 2011, developed by Namco Bandai Games. The game was originally created to be released in 2010 as part of Pac-Man’s 30th anniversary celebrations, but it was delayed until 2011.

Pac-Man Battle Royale is (as of writing) the final game to be released in the Pac-Man franchise in arcades.
Using the same basic premise as the original Pac-Man, Pac-Man Battle Royale brought the option of 4 player simultaneous play with each player controlling a different coloured Pac-Man all on the same screen, with the goal of trying to eat your opponent or try to lead the ghosts into eating them. Or playing in single player, the game will use a CPU controlled Pac-Man that would hinder the player.
The game can be set between three and nine rounds with the last remaining Pac-Man being the round winner.

Pac-Man Battle Royale was a fun, little battle game in the same vein as Hudson Soft’s Bomberman series but with a Pac-Man element.

This ends the Pac-Man arcade games and part III of my retrospective.
In part IV I will cover the home console/computer Pac-Man games.