I do have a bit of a soft spot for racing games, grew up playing them and still very much enjoy the genre today. However, there’s one motorsport discipline that I’ve never really gotten into from a gaming perspective, motorbikes. I think the last time I played a bike racer was Super Hang-On in the arcade, back in 1987… maybe the original Road Rash.

If you have ever played any kind of racing game recently, then you’ll find things are pretty standard here in terms of game modes. Single races, where you can take any of the bikes out for a ride on any of the tracks in the game. There are 176 different bikes from 17 different manufactures. Brands like BMW, Honda, Ducati, Suzuki, Triumph and more all offer various machines to ride on. Then there are the tracks, split over three continents, America, Europe and Asia. All three offer multiple real-life race tracks. Laguna Seca, Imola, Brands Hatch, Suzuka to name a few, thirty tracks in all to enjoy. So just pick a bike, pick a track and away you go for some single race action.

Then there are the endurance races. Pick a race length from 20 minutes to 24 hours. Choose your a bike, though you have to use a specially modified endurance bike. Select a track, tinker with the weather and time of day, time compression. Hit the track for a very lengthy race. There is also the basic time trial mode where it’s just you, your bike and the track. No opponents and no racing other than against the clock, a great way to learn the numerous circuits. There is also a career mode, which I will cover soon. But aside from the multiplayer mode (which I couldn’t really test with the game not being out as I write this), that’s about it for you racing options. Ride 4 offers pretty much what any other racing game offers, it neither excels nor falls behind in this regard, it’s all pretty much standard racing fare.

There are some nice features to play around with, a photo mode that is accessible from the pause menu, so you can take some snaps of your bike racing action. Of course you can tinker and tune your bike, buy new engines, transmissions and so on. You can even customise your rider, name, gender, info, riding styles and more. Then there is the editor where you can create your very own helmet and riding suit designs, you can even design your own unique liveries for the bikes. Ever played Forza Motorsport and its creation system? Same thing here. When it comes to the customisation, there really is a lot to get your head around with Ride 4.

In terms of looks, Ride 4 is a cracking looking game too. I know several of the tracks very well and they all looked fantastic. Tearing around Monza, Donnington Park, Interlagos and they felt like the tracks I knew. I’m not a bike person, yet the machines all seemed great too, I can’t say if they are authentic or not, but they are nicely detailed and looked like bikes… so that’s good. I did a race in the rain, which for me is the true test of how a racing game should look. Ride 4 looked stunning, reflections on the track, rain kicking up and hitting the screen, puddles formed on the circuit… it looked and felt like a wet race, ticked all the boxes for me. So far, so good. Until…

So that career mode I previously mentioned. Every good racer needs a career mode and I wish I could tell you how good this one is… but I couldn’t actually play it. From what I saw, it looked quite extensive. Split into three leagues, there’s the regional leagues (European, Asian and American), a world league and then the final leagues (superbikes and endurance). But before you can take part in those, you need to earn your licence by doing several tests. A time attack, lap on a test track, ride through gates, etc. Could I pass these tests? No. Oh I tried, I tried dozens and dozens and dozens of times. The tests are just too damn strict, from extremely tight times to beat to the test being a fail if you so much as put a millimetre of your bike off track (seriously, a millimetre). I did manage to do three of the tests after many, many, many attempts and a lot of time spent, but they got so frustrating that I just gave up in the end. I could not even get into the career mode to tell you what it’s like. I had to switch on all of the driving assists, and I’ve never done that with any racing game before. Yet, even with all the help the game offers… I could not do those damn tests to play career mode. I’ve had the game for over a week for review and I could not review the main part of the game.

I couldn’t work out if it was me or the game being really unfair and unforgiving. As I said at the start, I’m not a bike person… but I can play racing games… I think. I’ve never had this issue with any other game like this. I can race okay in the other modes, I can put up fight and even secure a podium or three in single races. On tracks that I know well, I could put in some decent times in time trial mode. It took a while to get used to riding the bikes in the game, they feel really heavy and you have to think about turning into and out of the corners about three turns in advance, but I got used to it. Yes, it is very different to racing a car around a track, I get that. I know I would never be able to ride a bike like this in real-life around a real track, but then again, I doubt I would ever be able to drive a Ferrari F40 around Monza in real-life on a real track… but I can do just that well enough in a driving sim. I just can not pass the tests to play career mode… even with the driving assists on. I became convinced the problem was the game. 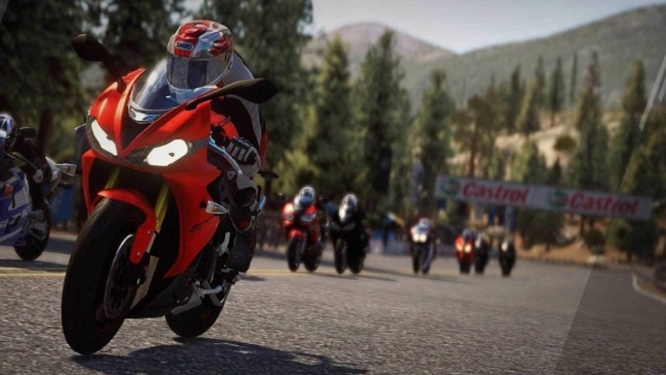 But is it really the game that is the problem and not me the player? I’ll happily admit (and I already have, several times) that I’m not a bike person at all, so there is a very good chance the issues I have with the game are not really with the game, as I just don’t understand bikes. So, I did a little research into the previous Ride games. As of writing, the original Ride holds a metascore of 54 on Metacritic. Ride 2 holds a 66 score and Ride 3 has itself a slightly better score of 76. They’re not exactly great scores are they? Very average to above average at best. Getting better with each new game yes, but still not great scores. Quick side-note, all of those scores on the Xbox as I’ve been playing the Xbox version of Ride 4. So as a franchise, Ride isn’t exactly setting the racing gaming world alight is it? Perhaps it is the game that is at fault and not so much me, or at the very least, there’s a bit of both there? But again, I got on okay with the single races, etc. It’s just those damn tests for career mode, they’re too ‘effin strict and the game is just not accessible for newbies to bike games like me.

Plus, seeing as I was having such a disappointing time with Ride 4, I thought that may be my driving skills had dulled. So I loaded up both Forza Motorsport 7 and F1 2020 just to re-test my skills. I was tearing around tracks, racing, fighting for positions and really bloody enjoying myself too (without all the assists on too). It has to be the game, I may not be a bike person… but I know a good racing game from a distinctly average one and average is what Ride 4 really is.

I really wanted to enjoy Ride 4, I honestly did, but it’s just rubbed me up the wrong way. As someone who plays racing games regularly and a person who considers himself pretty good at the racing genre, I just found it too punishing for what it is and a very stubborn game to truly get into. Ride 4 is just very, very meh for what I did get to play.