Souldiers, developed by Retro Forge Games and published by Dear Villagers, is a wonderful-looking Metroidvania action-platformer with a very attractive SNES stylised look. So far, it’s ticking all the boxes for me. I do love a Metroidvania and the SNES is one of my favourite gaming machines. On the surface, Souldiers works well. But style and nostalgia aside, it is gameplay that counts.

Fight for your freedom in a sprawling fantasy world caught between the living and the fallen. Hone your skills in a retro epic featuring puzzle platforming, metroidvania exploration and crunchy soulslike combat.

There is a story here about warring kingdoms, or something. Look, let’s be honest, you don’t play these types of games for the story. These are all about top-notch action, loads of weapons and items, upgrades, level exploration and more. The story is just something this is happening while you enjoy yourself with everything else that is going on. In terms of what is going on here with the plot, my brain just kind of involuntarily skipped over it. Good guys, bad guys, fighting, blah, blah, blah… I’m not dismissing the story here, if you really want to invest in it, it’s right there for you. It is just that, I really didn’t care for it. I was here for the gameplay.

With Souldiers you are given the choice of three different classes. A Scout, Archer, or a Caster. Each of the three really do play very differently from each other and will require that you alter your gameplay style depending on who you pick. Each of the three have their own strengths, weaknesses and skill trees. The Scout being the close combat character with a higher defence and block. The Caster is the other end of the spectrum with a very long-range attack but a far weaker defence. The Archer sits somewhere in the middle of those two and is probably the hardest character to use. The three classes add a nice layer of replayability if you feel like going through the game again once you reach the end credits.

The basics here have you killing enemies, earning EXP and levelling up to grow stronger. Earn points with each levelling up to spend on new skills and all the usual stuff you’d expect from a title like this. In terms of its basic gameplay, Souldiers really doesn’t bring anything new to the table. This isn’t a bad thing as long as the gameplay is solid and enjoyable. Do you know what? It really is too. Being a Metroidvania, you have the classic ‘finding a new weapon/item that will open up paths you previously couldn’t reach’ mechanic. Some basic puzzle solving. Finding a relics that adds fire (and other elementals) to your attack and you can burn down previously blocked areas. Find bombs to blow open damaged walls. Get a cape that allows you to double jump and reach higher platforms, that sort of thing. As I said, Souldiers doesn’t try to reinvent the wheel, it just tries to make sure that wheel keeps turning while giving you a comfortable ride.

Souldiers is a very familiar game and I loved this aspect too because it takes the Metroidvania sub-genre and just creates a very solid and enjoyable title with it. The combat here really does vary depending on the class that you choose at the beginning and this alone adds a few layers to the gameplay that other titles of its ilk miss out on. Enemies come in all shapes and sizes and each have their own attack patterns, you’ll really need to watch and learn to best even the simplest of enemy, never mind the bosses. You have a cooldown controlled dodge and a block, both of which will save you from death many, many times when used correctly. Health is hard to come by, potions cost a lot of coin, if and when you find a shop that sells them. You may find the odd healing (and other) potions out in the various areas but they are very scarce. You can very slightly top up your health via small pickups by destroying some scenery and taking out enemies. These pick ups will only top up your health a handful of points at a time too. Basically, the point I’m making is that Souldiers is not an easy game at all.

There are three difficulty settings to pick from and I began my play for this review on the normal setting… it was pretty bloody hard. So I dropped down to easy just so I could see as much of the game as possible to review it. Even then, easy is far from easy. Easy setting is more like a notch above normal and the hardest setting (which I did try for ‘fun’) is more like being a masochist who enjoys punishing themselves by sticking needles into their own eyes. Souldiers old old school hard and I do plan on going through the game again on a harder setting… just because I’m feeling a bit masochistic… and because this game is really damn good.

Looks-wise, Souldiers is, as previously mentioned, very SNES-like. The graphics are certainly a tad above the 16-bit era, possibly closer to early 32-bit stuff. But just the way the game is presented, the design of the areas, the talking to NPCs, etc. It all felt as if I was playing a SNES action-RPG title, of which there were many on that system. The various areas are crammed with tiny details that look great and keep your eyes busy. Souldiers really is a very nice looking and well-presented title, one that harks back to the ‘good old days’ of gaming.

About £16 – £18 (depending on format) is what Souldiers is going to set you back and it is available to buy on everything right now. There is a lot of game here from the three different classes and three difficulty settings, offering replayability. Even on easy, this game is no cakewalk and will take you several hours to get to the end of. For the coin, you do get a good-sized and very playable game… as long as you enjoy a tough challenge. I did have a few niggles. The controls often feel very loose. Many times I was just walking and my character would crouch when I didn’t want them to because even moving the stick a millimetre had an effect. Aiming up with the Archer had me facing similar problems as just the slightest touch and you’ll be aiming off centre. Thankfully, you can change this in the options and have the d-pad to control the character, which I very much advise doing. Still, I like using the stick more and would prefer to do so too if the controls felt tighter.

Then there is the wall jump, which is awful and completely counterintuitive. If you want to jump from the right wall to the left… you have to hold the opposite direction you want to go, otherwise the character will fall off the wall. So let’s say you are on the right hand wall and want to wall jump left, you need to hold down right to hold the wall, then press jump and very quickly press left at the same time… to then hold left so you grip that wall, to then press jump and right to go to the opposite wall. Rinse and repeat. This makes zero sense and your timing had to be split second perfect as you either wont grip the wall or you’ll still be holding right when you need to jump left (and visa versa) and not make the jump. It is kind of hard to explain properly but when you experience it, you’ll know exactly what I mean. Wall jumping should not work like this, ‘cos well.. it doesn’t work well at all. 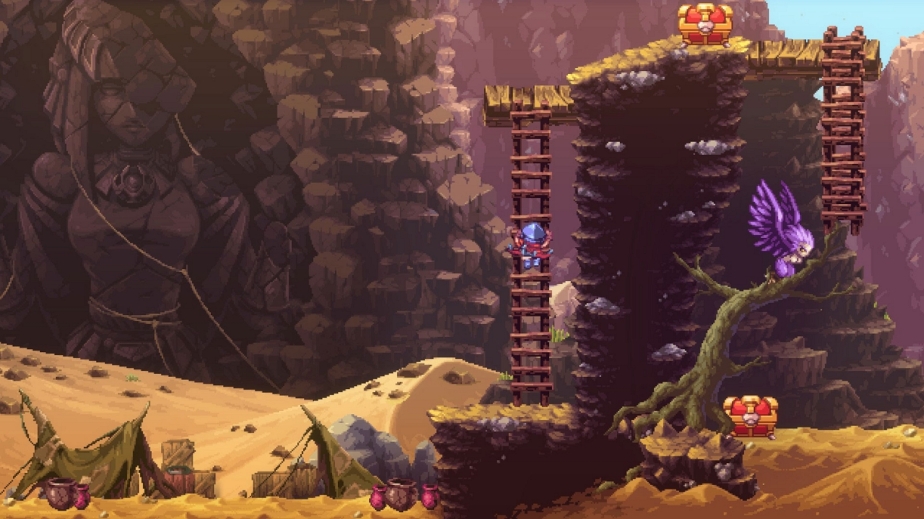 Some of the areas can feel a bit too long and may get a tad tedious with all the backtracking that you have to do, even with fast travel. Load times are not great and while they may not sound like a lot, 30 seconds to load each time you die, as an example. They really do add up and as this is a tough game, you will die a lot. Going to a new area can see you looking at the loading screen for over a minute. I know that doesn’t sound huge, but when you are going from area to area multiple times, again, this adds up. For a game that is as ‘basic’ (in a nice way) as Souldiers is, you really don’t expect load times like this. It’s not as if it has to load up a fully open-world environment in full 3D and HD graphics is it?

Progress can feel slow and sluggish too. It’ll take a good few hours before you even get to the main hub (city) of the game where you can buy weapons and items or purchase upgrades. Even the levelling up felt a bit slower than other similar games and some of the most basic skills will take you a long time to unlock. Still, Souldiers isn’t a sprint, it’s a marathon… a long, hard and very gruelling, but ultimately satisfying marathon. Apparently, this game has some performance issues on the Switch too. I played on the Xbox and didn’t see any problems myself. But I just thought I would bring up the Switch performance in case you were thinking of buying it.

Souldiers is the debut game from developer Retro Forge Studios and it really is a great debut too. It’s not a perfect game and I do think some of the issues mentioned above could be addressed. This is bloody hard too, but not in an annoying or unfair way. The difficulty here is well balanced and certainly playable if you are used to games with a bit more of a bite to them. I mean, I’m going back for more on a harder setting. Though I do think that an even easier setting would be great for newcomers to the genre because easy is still challenging. Souldiers is a good looking game with that late 16 to early 32-bit style and I loved exploring the various areas that the game threw at me. If you are looking for a hard but fair Metroidvania, action-platformer with a smidgen of RPG thrown in, then you’re not going to find one much better than Souldiers.