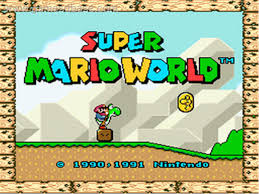 Little Bit of History: Released in 1990 and bundled with the Super Nintendo Entertainment System (SNES) at launch. Produced & directed by Shigeru Miyamoto and published by Nintendo. Super Mario World was THE defining platform game of it’s time and often considered to being one of the best games ever made.

Little Bit of Plot/Story: It’s a Mario game…what plot? Princess Toadstool has been kidnapped by Bowser…again and Mario & Luigi are tasked to saving her…again.

Little Bit of Influence: By this time, Super Mario was already an established IP with this being the 4th official Super Mario Brothers game. The franchise is still going today. Yoshi went on to have his own franchise starting with Super Mario World 2: Yoshi’s Island. There was even a direct follow up planned called: Super Mario’s Wacky Worlds but it was in development for the Philips CD-i machine which was a huge failure and the game never saw the light of day. Super Mario World even spawned it’s own animated TV show.

Little Bit of Memories: My best mate Paul brought a SNES and he would stay at mine usually on a Friday night where we would stay up playing Super Mario World all night into the early hours while listening to 90’s dance music. I remember the time we finally finished the game and all 96 levels, including that damn tricky Star Road unlocking the new alternate world…all without a guide. That Butter Bridge level still haunts me to this day but the music was catchy.

Little Bit of Playability: Oh hell yes. Still one of the best (if not THE best) platform games ever made. Any classic gaming fan should play Super Mario World or it’s remake Super Mario World: Super Mario Advance 2 on the Gameboy Advance. If you have the chance to play this game…play it.