Well, this is an ‘interesting’ idea. A game set in the aftermath of the Chernobyl Disaster. Developed by The Farm 51 and published by All in! Games Chernobylite is a mix of various gameplay mechanics. Still, I guess it could be best described as a survival game. But to leave it at that would be doing the game a disservice. To really get into what Chernobylite is, I’ll need a lot more than just this introduction paragraph.

Yes, Chernobylite could certainly be called a survival game, but there is so much more going on here that really needs looking at too. Playing as Igor Khymynuk, a physicist who worked at Chernobyl before everything went very badly wrong. 30-years after the disaster and Igor returns to the site in search of his missing fiancée, Tatyana, who disappeared shortly before the Chernobyl Disaster. Soon after successfully breaking into the Chernobyl Nuclear Power Plant, Igor finds a strange (and real-life) mineral called Chernobylite, which is used to power a portal gun. And that is when things really kick into gear.

The core gameplay of Chernobylite has you setting up and carrying out missions to scavenge the Chernobyl Exclusion Zone and help build your base and create weapons to help you in bigger and harder missions as you slowly uncover just what happened to Tatyana. Part FPS (though it’s possible to play through missions without firing a single shot), part survival, part, base-building and crafting, All with a sci-fi/horror setting. Really, Chernobylite is a mish-mash of gaming ideas and when titles tend to throw multiple ideas into one title, they usually become a ‘jack of all trades’.

Aside from the various gameplay mechanics used here, there’s also a branching story system. You’ll have a great many conversations with your team (oh yeah, you recruit people too) and you’ll be given a variety of responses and decisions to make that affect not just the story but also your relationship with individual characters. An idea used in many games before, but Chernobylite does something a little different with it as your decisions are not necessarily final. See, when you die in this game (and you will), you enter a ‘dreamscape’ and while in it, you can see how the decisions you have made have affected the story and characters. You can then go back and change your decisions (using Chernobylite shards) to better suit your needs.

Quite honestly, this is a brilliant gameplay mechanic. The branching system here is quite simply huge and unlike other games that use it to little effect, Chernobylite really pushes the whole multiple decisions thing beyond anything I have ever seen in a game before. From minor effects like how enemy patrols will work on missions to much bigger and major character and story events, the game will change as you play. You’ll actually want to die so you can enter the dreamscape and see just how differently things can work out. It’s a mechanic that feels very roguelite I guess.

Before you do embark on a mission, you can (if you have the resources) build your base. Really, this part of the game feels Fallout 4-like. Love or hate Fallout 4, its base-building mechanic was actually pretty damn impressive. Chernobylite has a similar base building thing going on, it may not be as in-depth as Fallout 4, but it’s still pretty extensive. You don’t just build base improvements (to help keep the morale of your companions up) but there’s also weapon and item crafting and so much more.

The endgame of this is to plan and carry out a heist, which I’m not going to cover here, as to avoid major spoilers. Anyway, you can actually go for this heist very early on in the game… of course you will die, as you are just not equipped to carry it off. This is where the missions in the game come in handy, this is why you need to gather resources and build your base and weapons. Along the way, you will recruit team members, each with their own backstories and strengths. Backstories you will want to uncover to get the most out of their skills. Quite a few quandaries pop up throughout the game that will affect the characters, which all goes back to the branching system I’ve already covered. 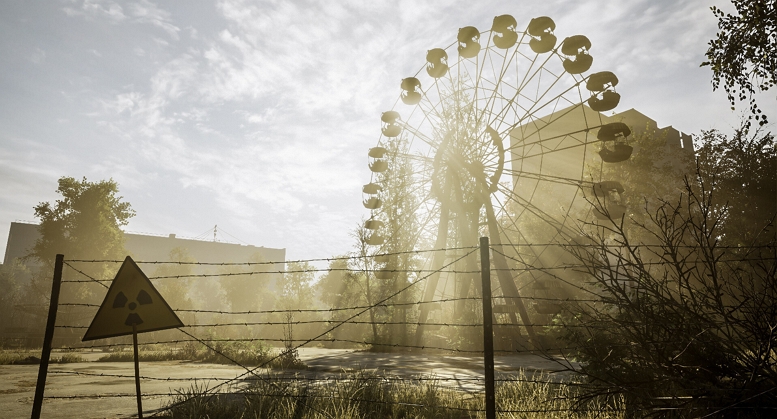 Things you say and do will affect so much in the game that you will soon find yourself being very careful of just what you do decide to say and do. The writing here really is quite excellent and far deeper than you think as you play through the first couple of hours of the game. In the options, you can choose between English or Russian audio. Trust me, you’ll want to keep it Russian. The English voice acting is rather ‘Cambridge’, I think would be the best way to describe it. It just sounds wrong and so out of place in terms of the characters and setting. But the Russian voice acting is spot on (put subtitles on so you know what’s going on) and adds a layer of authenticity that is lost with the English voices.

As for the missions themselves, there are multiple ones that can be selected, set in five different regions around the Chernobyl Exclusion Zone, each with different objectives. You can just crack on with the story if you like, or you could seek out clues and background info to delve deeper into the plot. Of course, you’ll also be doing a lot of looting for resources to keep your base and team in tip-top condition. The maps themselves are not exactly huge… and that’s actually a good thing. You can get several missions under your belt in a relatively short amount of time. You can also send your companions out on missions, so they can go and do some resource gathering while you take care of more important matters.

When you (and your team) do come back from a mission, you have to ration out the food. Give out too much and you’ll soon be running low on food. Give too little and you’ll soon see a drop in morale. You’ll also need to spend a little time with everyone to get to know them better and build up relationships. There are quite a lot of surprises in Chernobylite (some that I really don’t want to ruin here) and there were times when I was playing this that I forgot I was playing a title from a smaller studio. Honestly, quite a lot of this game wouldn’t feel out of place in a AAA, big-budget title. There’s so much depth of gameplay here that I couldn’t help but be impressed.

There are a few niggles that I have with Chernobylite. The combat in the game is very ‘okay-ish’. You have a dodge move/side-dash thing… and that’s about it. There’s no cover system or anything like that. Given the game does rely on stealth quite a bit, no cover system really can be annoying. A lot of the enemies feel like bullet sponges and gunfights do tend to drag on a bit too much… I think that may be to get you to use stealth as much as possible though. The maps in the game can get a little repetitive as they are the only places you go to. After a while, about the halfway point of the game, you’ve seen pretty much everything all the maps have to offer and as you do keep revisiting the same handful of locales over and over, it all feels a bit tiresome. Now, the maps do ‘evolve’ as you progress through the story, so they are never exactly the same. But those evolutions are very, very slight for the most part. 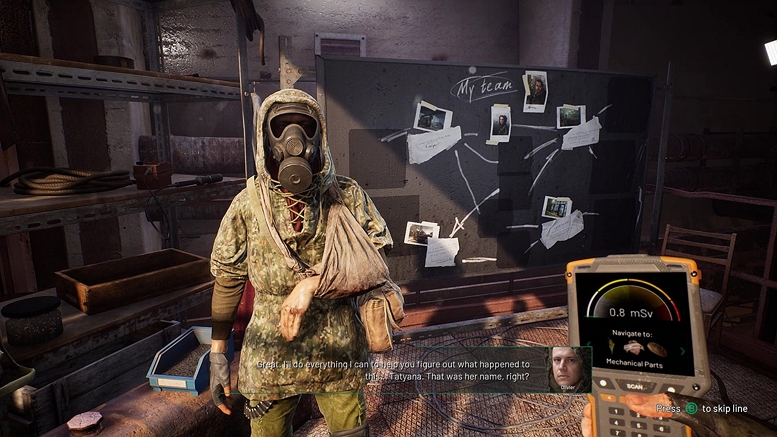 Very recently, I reviewed another survival game called Shadow of Kurgansk. Long story short and I said in that review how a survival game these days really needs to stand out and do much more interesting things. Shadow of Kurgansk failed in that regard and was a very bland and bog-standard gaming experience. Chernobylite however, this is exactly what I was talking about. Yeah it’s a survival game and you have seen and played dozens of them by now… but it also takes chances and adds so much more to the genre. It’s far from being a perfect game, but it is a very solid and playable attempt at the survival genre.

As for my final judgement, I need to look at how much the game is being sold for. Around £25 is the answer to that (depending on format) and I think that’s a very reasonable price point. There is a lot crammed into Chernobylite, FPS, survival, RPG, base building, team management, etc. Yup, you get a lot of depth of gameplay for your coin here. There’s more than enough to keep you busy for a good few hours and to get the most of out the game, you’ll really need to lose yourself in all it has to offer too. This’ll have to be a recommendation from me. Even though this review is over 1,500 words long, I’ve still not covered everything that Chernobylite has crammed into it. EXP, levelling, skills and more.

If you are on the lookout for a really good survival game, then Chernobylite is well worth picking up. A cocktail of several gameplay mechanics that have been blended beautifully.