I was reading an article recently that states how the console wars was a new thing since Sony and Microsoft got in the ring together with the Playstation 2 and Xbox.
I guess the article was written by someone in thier 20s.

Is this whole console war thing new though?

Most people would even say it all started with SEGA vs Nintendo with the Master System and Nintendo Entertainment System (NES) in the early/mid 80s…but did it?

Console wars have always been around since home gaming began.
Now before I get into the history lesson, I just want to address this whole brand loyalty thing and why for me it makes no sense.

Why do people feel they have to be loyal to one brand over another? Why do you not just but the machine that is best suited to your taste and situation?
Or if you can afford it, buy several machines and have the best of everything, why does it all have to boil down to some kind of a fight?

Here are (as far as I can remember) all the game machines we owned in our family over the years as well as when I could start to buy my own machines as I grew up.

For me, I started playing on the ever classic Atari 2600. It was the popular game console at the time, but it had is rivals too.
Then we moved onto our very first home computer with the Commodore 64. Commodore did become the machine of choice for a while when my elder brother brought an Amiga 500.
Then it was the turn of the almighty Super Nintendo.
This was when things got a little “cocktail like” and we started having multiple machines with SEGA getting involved into the mix with the Saturn was purchased by my elder brother.
Eventually a Playstation made its way into our lives and I even brought a Nintendo 64, while my other brother brought a Dreamcast.

Then it was time for me to move into my own place and I got myself a Playstation 2 and a Nintendo Gamecube. Followed by an Xbox 360, which brings me bang up to date with me owning an Xbox One today. 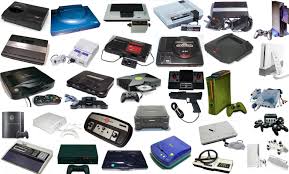 As you can see, it has been quite a mix of machines over the years from various companies and there has been no real “brand loyalty”. Yeah there have been multiple Commodore machines as well as Nintendo, SEGA, Sony and now Microsoft ones along the way. But the point is I’ve/we’ve never stuck with a manufacturer from the start all the way through to the end.

Never owned a NES and do not own a Wii or Wii U. But the SNES, N64 and Gamecube have been there. Wait, my brother did own a Wii.
Same with SEGA, no Master System or Mega Drive. But there have been a Saturn and Dreamcast in our family somewhere.
Sony’s first attempt at a gaming console with the Playstation was purchased as was a Playstation 2. My brother also brought a Playstation 3…but none of us own a Playstation 4.
Then with Microsoft, as far as I can remember none of us got an Xbox. Yet myself and two brothers did get the Xbox 360 and Xbox One.

Plus I have had the fortune of having friends that have also purchased machines. So I’ve always had the best of all worlds really.
If I or anyone in my family didn’t own a certain games machine, then someone we knew did.

But enough about the pointlessness of “brand loyalty”, let’s get back onto the topic at hand and console wars.

As I was saying before I went off on a tangent. I was reading recently how someone claimed that the console wars was a pretty new thing since Sony and Microsoft.
Pretty much every single one of the machines I mentioned that I/we owned had its rivals at one point or another and there was always a “war” between them too.

The Atari 2600. We owned one of these, but I also recall a friend who lived on the same street as us at the time had a ColecoVision and there was always rivalry as to which had the better games/graphics.

Moving on to the Commodore 64. Again we had a friend on the same street who owned a ZX Spectrum and another with an Amstrad CPC, and again there was rivalry over which was the better computer and which had the better games.

With the turn of the Amiga 500 came its rival, the Atari ST. Again we knew someone who owned one and there was rivalry.

The rebirth of the console age came back with SEGA’s Master System and Nintendo’s NES and they had a bitter rivalry too. While we never had either in our family I had two school friends that did, oh yes there was “war”. They both still have the scars to this day.

I could go on all day. But my point is that this whole petty and inane console war thing has been around for decades going back to the Atari 2600 era and the fact it is still ongoing now makes it even more pathetic. I just think it’s much more vitriolic now.
Yet I just know it’ll carry on as long as there is multi platform gaming.

Another reason I wrote this was due to a chat at work. When I mentioned I had an Xbox One, the person I was talking to (PS4 owner) said: “The loosing console”, based on the fact Microsoft are selling less units than Sony.
You know, I don’t care who sells how many consoles as it does not affect me in any way.
I brought an Xbox One (I’ll even admit the Xbox One launch was a disaster) as it suited my needs and offered what I was looking for in a games console, not because I want popularity. I fail to see how a person can really care whether Sony/Microsoft sells 1 billion units or 1 unit. You don’t get to see any of the money, so why should it bother you?
Even more so, I only brought my Xbox One a few months back. So I was fully aware of its sales figures at the time…I just didn’t care. As I said, I brought a console for gaming, not for popularity.

Does or really matter who “wins” what in these console wars, is it really any importance to you how many units are sold and by who as long as you are happy gaming?