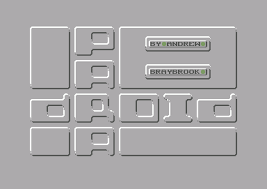 Little Bit of History: Written by Andrew Braybrook, developed by Graftgold and published by Hewson Consultants. Released in 1985, Paradroid was a very “unusual” but original game for it’s time. A meeting of shoot em’ up and strategy in a Sci-Fi scenario.

Little Bit of Plot/Story: Set on a spaceship overrun with droids, you control a special droid called the “Influence Device” and you must destroy all other droids on the ship. Starting with the low droid number of 001, you can destroy or even take over the other droids. Each droid has it’s own number with higher numbers meaning stronger more difficult droids you can become.

Little Bit of Character: There are no real characters, just hundreds of differing and numbered droids.

Little Bit of Influence: There are plenty of similar styled games available on IOS and Android. Paradroid also spawned variations and different ports on the game like: Paradroid Competition Edition, Heavy Metal Paradroid, Paradroid 90 and Paradroid 2000. Along with several fan made remakes and updates. The original Paradroid on the Commodore 64 is often hailed as one of the best and most original games on the system.

Little Bit of Memories: I have very fond memories of this game as it was something very different for the time. Picking and choosing which droid you should attempt to destroy or take over, having to think before you acted really offered a refreshing change and something original to enjoy.

Little Bit of Playability: It’s a bit clunky and sluggish by today’s standards and some of the other versions and even fan made remakes play smoother. But at it’s core is still a great action/strategic game worth revisiting in any of it’s versions.