Welcome back Bat-fans, to my retrospective of the Batman games that I’ve played over the years. Let’s kick things off with Batman’s first foray into the open-world sub-genre. 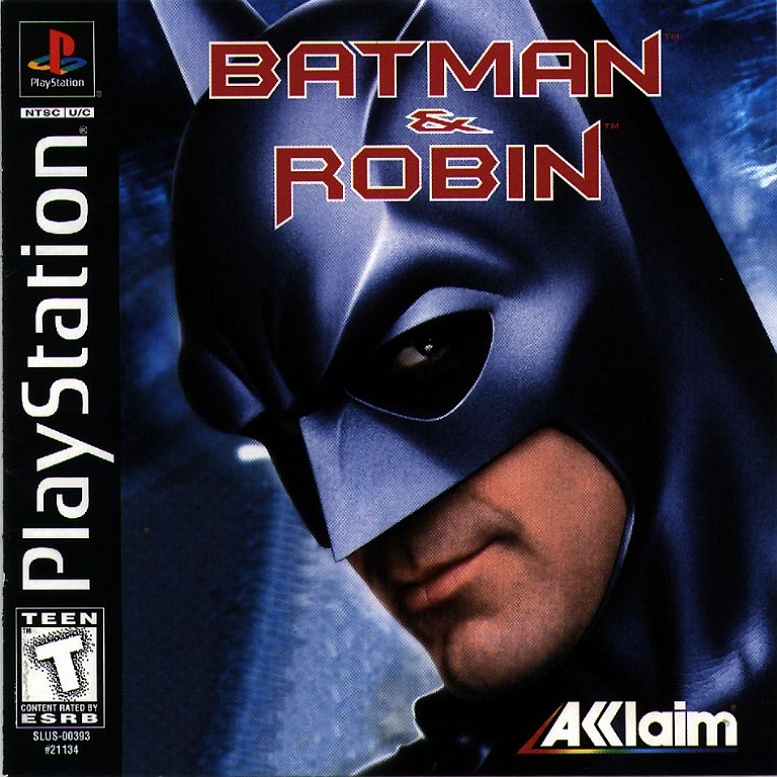 Developed by Probe Entertainment and published by Acclaim. Batman & Robin was unleashed on the Playstation in 1998 and based on the movie of the same name. This time around you could control either Batman, Robin or even Batgirl and each character had their own abilities, gadgets and even their own vehicle. Batman used the Batmobile, Robin had the Redbird motorcycle while Batgirl favoured the Batblade.

Following the plot of the film with the trio of heroes having to take down Mr Freeze (compete with endless freeze/cool puns) and Poison Ivy. Batman & Robin featured a semi-open world/sandbox style and even utilized Batman’s detective skills by having to use the Batcomputer to find clues. You’d even have to search around to find Riddler question marks… sound familiar? In many ways, this was the foundation for the Batman Arkham games we have today. 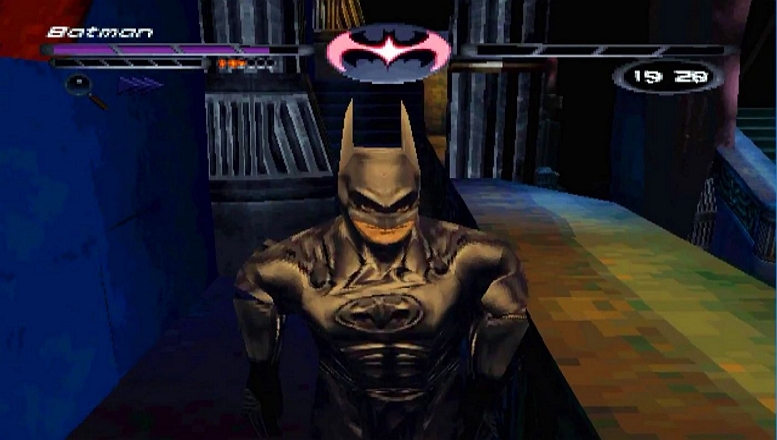 Game reviewers were not very kind to this title, just as film reviewers were not towards the film. Overall, the game was just very ‘meh’. But you really have to give the devs credit for putting Batman in an open-world environment. It was slow and clunky, but honestly, still pretty damn impressive for the time.

Batman & Robin was a great idea, but poorly executed and maybe very slightly ahead of its time? The clunky controls and sluggish combat really slowed the game down and the awkward camera was a pain.
It was a game that was just a bit too ambitious and the limitations of the hardware at the time could not deliver what the game was trying to do. A good effort, but just not good enough. 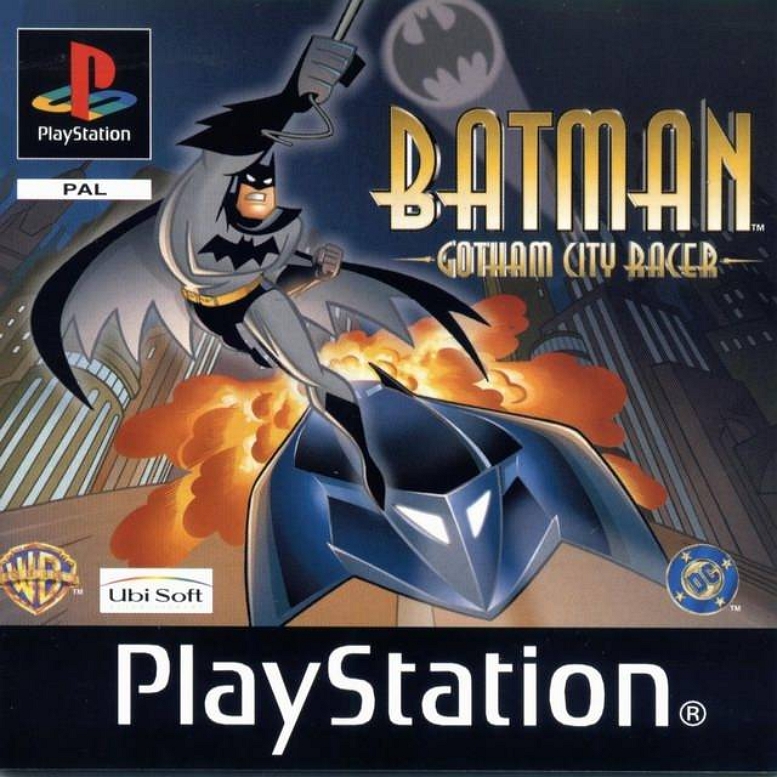 Developed by Sinister Games (how apt) and published by Ubisoft. Based on the new (at the time) animated show: The New Batman Adventures and was released in 2001 for the Playstation. There were quite a few of these kinds of games popping around this time, where they took a franchise and turned it into a vehicle-based game. 007 Racing (2000) was another one.

Batman: Gotham City Racer was a simple point to point kind of affair. With you controlling various Batman vehicles around Gotham trying to stop the villains of the Batman universe. Some missions would be as simple as go to [insert location here] or follow [insert villain here] with very little variety or depth of gameplay. You would control Batman, Robin or Batgirl… or at least their vehicles anyway, all while being guided by a big floating green arrow. 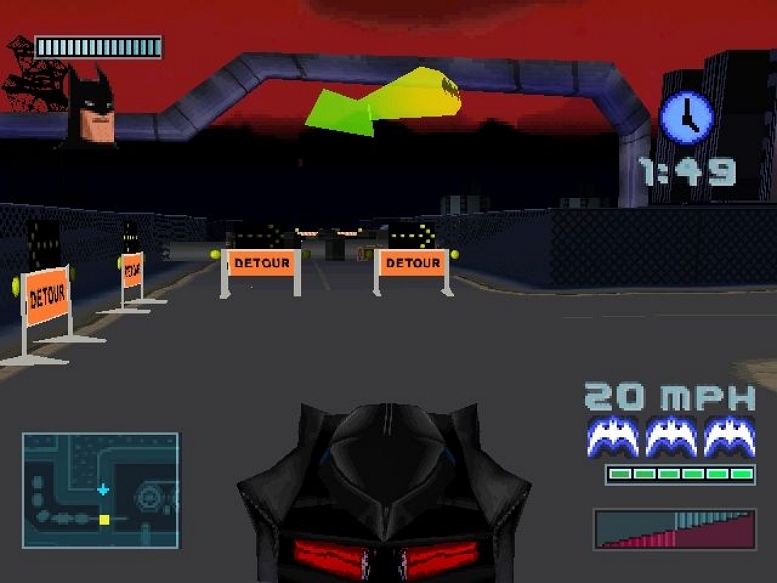 The driving mechanics were terrible and the vehicles felt awful to drive. The levels were just so damn dull, even if the game oozed atmosphere and felt very moody, like the show it was based on. The best bits of the game were the little animation between the missions taken directly from the show. Batman: Gotham City Racer was just bad. Dull, empty and lifeless environment and no real gameplay variety. 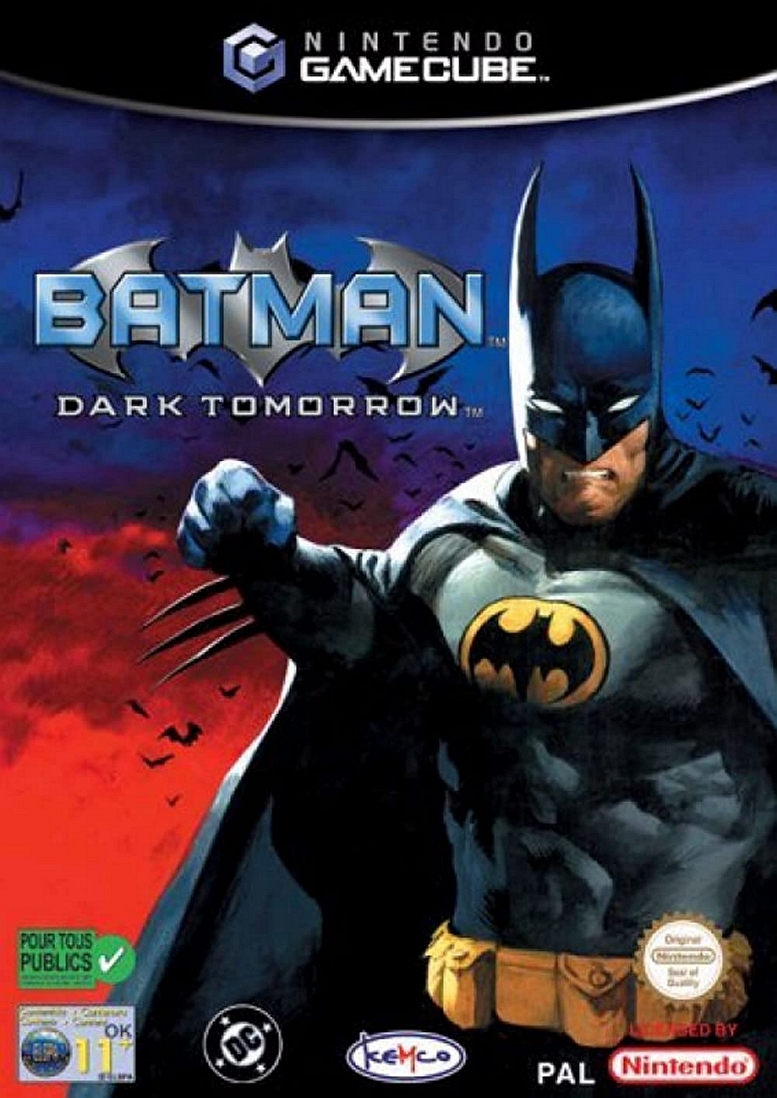 Released in 2003, developed by HotGen and published by Kemco for the GameCube and Xbox. On paper, Batman: Dark Tomorrow really had a lot going for it… on paper. Veteran DC Comics’ scribe, Scott Peterson and Kenji Terada, the writer of the first three Final Fantasy games, collaborating on the story for the game. Even the Royal Philharmonic Orchestra were hired to play the game’s dark and moody score. Batman: Dark Tomorrow really was wonderfully dark and atmospheric.

But none of that could hide this game’s poor controls, terrible camera and repetitive gameplay.
This one received mostly negative reviews with many gamers calling this ‘the worst Batman game ever’. Really? Yeah, it’s bad, but at least it’s not Batman Forever on the SNES bad. 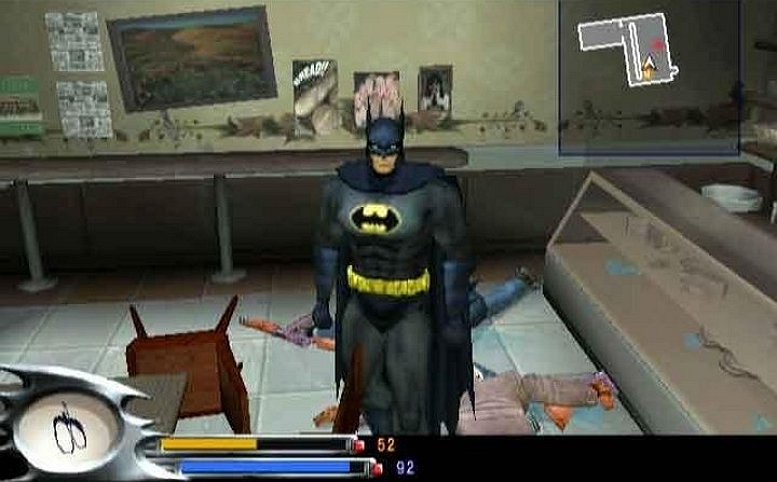 Really a shame about this game as it had a lot of potential. The graphics were really well done and detailed (for the time). The presentation was amazing with sublime cutscenes and great music. But the gameplay was horrible, dull uninspired missions, confusing navigation and sluggish controls just killed any hope this game had. A few tweaks, a bit more work and Batman: Dark Tomorrow could’ve been a really great game. Shame really. 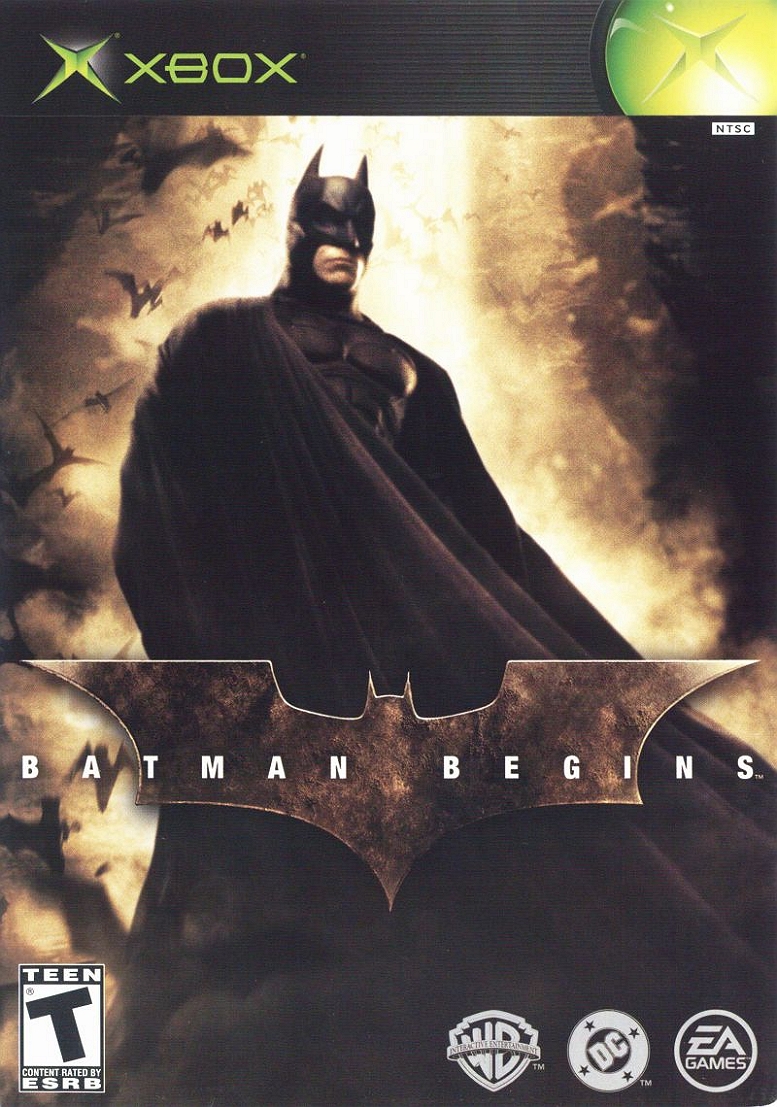 Based on the film and released in 2005 for Game Boy Advance, GameCube, PlayStation 2 and Xbox. Developed by Eurocom and published by EA Games. I’m going to be talking about the Xbox version here. Christopher Nolan breathed new life into the Batman franchise when he made his film, but could the game version do the same for the gaming world?

Bringing back all the original cast from the movie (except Gary Oldman) to record all-new dialogue and even using footage directly from the movie itself. Batman Begins followed the film very closely, but also added plenty of features solely for the game. One interesting feature was ‘intimidation’ where Batman could use the environment and his gadgets to strike fear into opponents, which would weaken them up for combat. The game also relied heavily on stealth by allowing Batman to sneak and use shadows to his advantage. 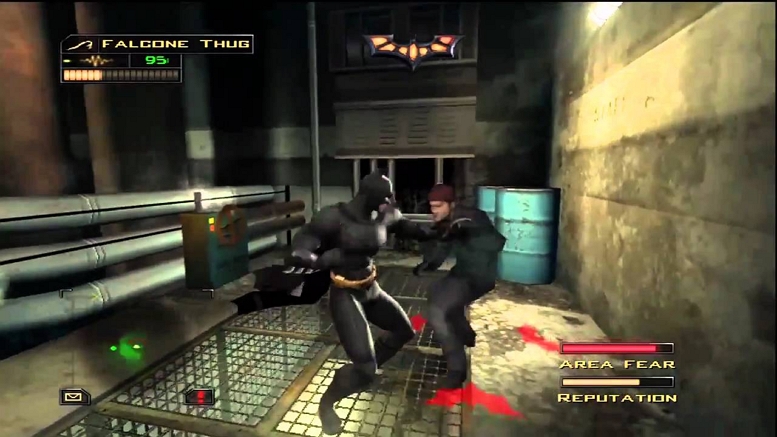 Batman Begins brought a lot of new and great ideas along with it. The environments were impressive with plenty of details and interactions. The voice acting was top-notch and it really captured the film well.
But overall, it was very, very average. The game was ultimately very linear, the AI was embarrassing making a lot of Batman’s skills redundant and it just felt very thrown together, as if they spent most of the budget on the license and actors and less on the game itself. A real shame as it could have been the game Bat-fans had been waiting for, but it was a huge step in the right direction.

Okay, so I’m nearing the end of this retrospective now.  As I have two separate series coming up but both series with multiple games each. I’m going to do each series as a bundle of games instead of separate ones this time around. First up we get a Batman game franchise from an unusual source.

Released 2008, 2012 and 2014 respectively. All developed by Traveller’s Tales and published by Warner Bros. Interactive Entertainment. Available for pretty much every games console at the time. Who would have thought some of the best and most fun Batman games would come from LEGO? Well, it’s true.
The LEGO games had already been around for a while with LEGO Star Wars and LEGO Indiana Jones, etc. So why not Batman?

These LEGO titles are infamous for their huge roster of characters, both heroes, villains and even vehicles each with their own special abilities. Explorable levels, humour, puzzles and overall just plain old fun gameplay. Each one of the games has been highly praised with favourable reviews for all three titles. 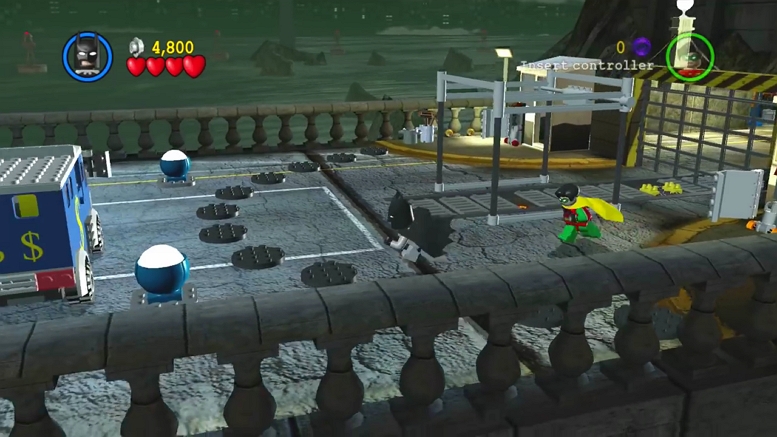 Seriously, if you’ve never played any of these games… go and do it now. Get all three as they are great fun (and cheap). With some very funny cutscenes and dialogue, plenty of replay value, hundreds of collectables and a great co-op mode. I’d be the first to admit that these LEGO titles are all very ‘samey’ but they are also damn great fun. There’s so much crammed into each of these games it’s amazing. From hundreds of characters, to hidden extras and missions… including bringing back Adam West as Batman in a 1960’s Batman-inspired mission. They just remind me of old-timey games when gaming used to be fun first and foremost. 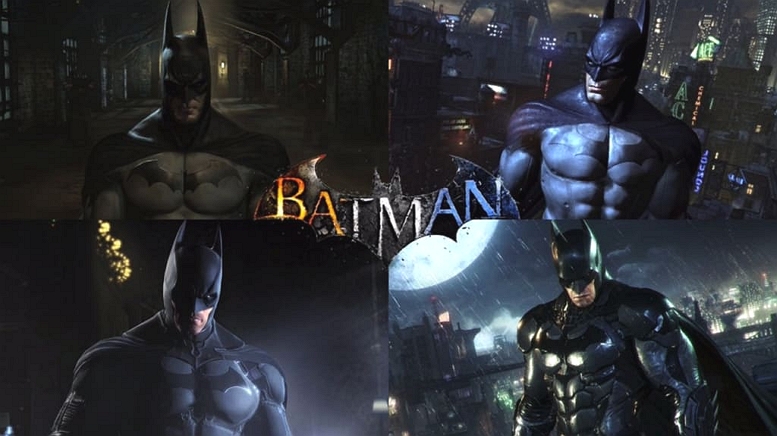 While Asylum, City and Knight being developed by Rocksteady Studios, Origins was developed by Warner Bros. Games Montréal. All four games were published by Warner Bros. Interactive Entertainment and released between 2009 and 2015. Covering multiple formats including; Windows, PlayStation 3, Wii U and Xbox 360.

These four titles are often said to be the defining Batman games and the one series that really makes you feel like you are Batman. Multi-award winning, and selling millions upon millions of copies around the world. The Arkham franchise was actually a surprise hit when the first game was released. No one was really expecting too much when Batman: Arkham Asylum was first announced and shown, especially as the devs were mostly inexperienced and their previous game, Urban Chaos: Riot Response, was very ‘meh’ at best. But it became the big hit game of 2009 making Game Of The Year and winning numerous other gaming awards.

The Arkham series has gone on to massive critical acclaim from both the gaming press and gamers alike. With rich and varied gameplay, a roster of great characters, unbelievably awesome combat that is easy to do but hard to master, collectables galore, in-jokes and references to some of Batman’s illustrious life in the comics. This series really is the pinnacle of the Batman games so far, and even though Origins is often thought of as being the bastard son of the franchise… it is still a damn fine Batman game overall (it’s actually my favourite after the first one). 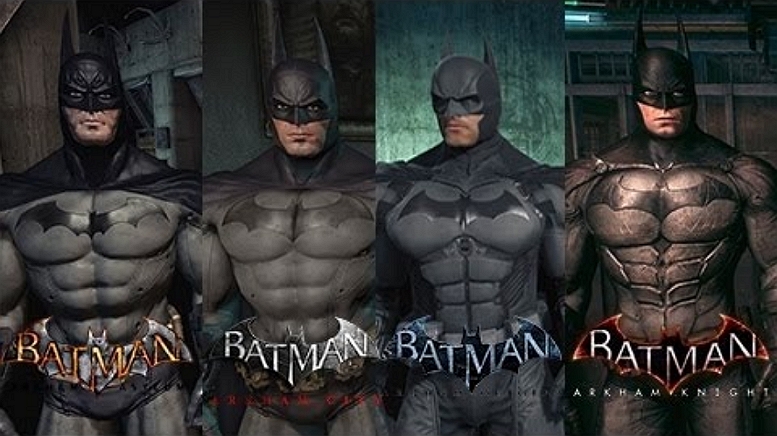 The series has always treated the comic book source and its fans with respect… yes even Origins. The developers are clearly big Batman fans and they cram the games with plenty of references and things to find. As well as hiring comic book talent like veteran Batman writer, Paul Dini. Along with Batman voice actors from various projects like: Kevin Conroy, Mark Hamill and Arleen Sorkin. The Arkham games just ooze atmosphere and gameplay, as well as featuring compelling and well-told stories. Using Batman to the best of his abilities from free-flowing combat, detective work and even stealth elements. The Arkham tetralogy is highly praised and rightly so too. Again, just with the LEGO series, if you have not played these games yet, go get them now.

Well, that just about wraps up my retrospective look at Batman in gaming. From the simplicity of the ZX Spectrum and Commodore 64 days, right up to the modern-day with the Playstation 4, Xbox One and beyond. Batman has been a part of gaming for almost as long as gaming has been around itself.

I know I didn’t cover every game and that there are quite a few I missed out. But hey, there are loads of Batman games and covering all of them would’ve made this retrospective stupidly long. So I just picked the ones I played and are familiar with, good and bad.

I think that, in terms of quality, Batman has had a better life in gaming than pretty much any other superhero. I can’t wait to see what the future brings for Bruce Wayne (spoilers) in terms of video games. The Arkham franchise has set an incredibly high bar, so it’ll be interesting to see where The Caped Crusader can go from here.