So I finally got around to watching Quentin Tarantino’s latest film, The Hateful Eight. 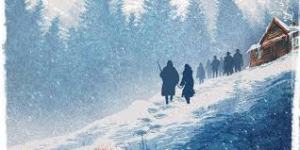 This is a film that has really split opinions. It seems to be one of those either love it or hate it pictures.
Now I’m a self-confessed Quentin Tarantino fan, so it has to be a winner right? Well I read a few spoiler free reviews before I went to see this and there are some big fans of Quentin that really, really hate this one.
So what camp do I find myself in with this film, love or hate?

This is going to be relatively spoiler free, but the odd little one will slip in. So if you don’t want anything spoiled, stop reading now.

My old mate Paul saw this before me and really enjoyed it. He likened it to a stage play, and I can certainly see that. It is a fairly ‘simple’ production with a small cast and mostly all taking place in one location. This could easily be adapted into a stage play.

But then it also reminded me of something else too. The John Carpenter classic; The Thing. Again, the whole claustrophobic atmosphere, the paranoia, distrust among the characters and small cast. But then you have the snow setting that film had also showing up here.
Adding on to The Thing connections, film score legend Ennio Morricone provided the music for The Thing and he also did the music for The Hateful Eight too. Oh yeah, Kurt Russell. Coincidence? I think not. I think its quite clear Quentin was inspired by The Thing with this film.

While structure wise The Hateful Eight is similar to Reservoir Dogs with a touch of The Thing thrown in too, the stories and characters are worlds apart.

Anyway, first up, my views on the cast. 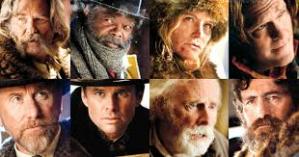 Quentin has done it yet again. The perfect cast for the film.
The main eight.
We have Tarantino favourites Samuel L. Jackson, Tim Roth and Michael Madsen.
With Walton Goggins and Demián Bichir.
Then there is the legend that is Bruce Dern.

Everyone here does a sterling job, with Jackson being his usual shouty but awesome self and Madsen that cool, low key performance he does so well.
Roth (for me) was the best of Tarantino’s usuals doing a sublime job. With Dern who’s part is fairly small, but what little screen time he has is not wasted at all.
Goggins is almost scene stealing and Bichir is equally impressive in the film too.

Now there are two names missing from the cast there and I left them out for a reason. That reason being, in think they deserve their own separate mention. 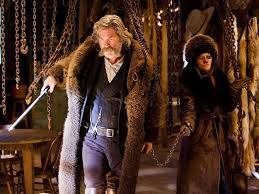 Jennifer Jason Leigh and Kurt Russell.
Why do they deserve their own separate mention? Because I feel they stole the entire film. Best performances by far and the two have a great chemistry throughout the whole film.
Tarantino has done with Leigh what he has achieved with other forgotten actors in his previous films. John Travolta with Pulp Fiction, Pam Grier and Michael Keaton with Jackie Brown, David Carradine and Daryl Hannah with Kill Bill. By taking an actor(ess) long forgotten about and making them relevant and memorable.
Leigh is amazing, her performance only beaten by the make up effects to make her look so grimy and repulsive, when normally she is really attractive and pretty.
While Russell is both bad ass and utterly charming too and I’m sure he is channelling a little MacReady from The Thing here, probably at Tarantino’s request.
These two actors really make this film worth watching alone.

So onto the plot/story.
Well to get it down to basics and trying to avoid spoilers.
Major Marquis Warren (Jackson) is a famed bounty hunter who is left out in a blizzard after his horse dies. Luckily For him, a stagecoach is passing by and he asks for help.
However, getting help is not going to be easy as riding in the stagecoach is John Ruth (Russell) and his prisoner Daisy Domergue (Leigh) with a $10,000 bounty on her head is wanted for murder and John Ruth is their man that tracked her down and is taking her to be hanged in the town of Red Rock, this is where he gets his nickname of ‘The Hangman’ from as he always brings his bounties in alive for them to be hanged.
Eventually John Ruth agrees to give Major Marquis Warren a ride in the stagecoach, but not without keeping the new passenger at a gun barrels length. It also seems this is not the first time they have met either. Along their journey, they eventually come across another man wondering around in the snow. Chris Mannix (Goggins) who reveals himself as to being the new Sheriff of the town Red Rock, which is where the stagecoach is heading and he too asks for a lift. This is where the first stitches of distrust start to be sewn as John Ruth thinks it rather suspicious that he just so happens to come across two random people out in a blizzard. Are they working together to claim that $10,000 bounty for themselves?

In the meantime, the blizzard is slowly getting worse and worse, becoming more of a danger.
They will never make it to Red Rock before the blizzard caches them, so they stop off at a well known place out in the mountains called; Minnie’s Haberdashery with the intent to wait for the blizzard to pass.
It is in Minnie’s Haberdashery where we meet Bob (Bichir), Oswaldo Mobray (Roth), Joe Gage (Madsen) and General Sandy Smithers (Dern) who have also sought out shelter from the incoming blizzard.
This is where most of the film takes place and where the distrust and paranoia gets turned up to 11 as John Ruth starts to suspect everyone is out to steal his prisoner and that $10,000 bounty.

This is where I’ll leave the plot as I’m heading into some major spoilers here. 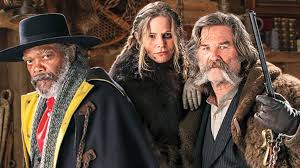 A few thoughts on the movie.
The cinematography is simply gorgeous. The whole film is beautifully shot, from establishing shots of the mountains and scenery to the main set piece of the haberdashery itself. It all looks beautiful and authentic.

The dialogue is top notch too as you would expect from Quentin Tarantino. Often long speeches being delivered, some full of really intricate plot details, some just people talking.

The acting (as I touched upon) is also sublime. I already mentioned how great Roth is as well as how good both Russell and Leigh are. But I really have to mention Jackson too as he is memorising and thoroughly enjoyable throughout the film. Bichir playing Bob is funny and provides some great and needed comic relief. With Goggins really surprising me as he almost steals the whole film.

The plot is really well constructed, as the paranoia of the characters unfolds, you’ll notice little details in meaningless dialogue that end up actually meaning a hell of a lot.

Tarantino also uses misdirection really well here and will always have you trying to second guess where the film is heading…and you’ll mostly be wrong too. By the time the film ends, you’ll be thinking back on some of the smaller details and trying to piece all the little bits together.

It is a long film and it is slow paced too. The standard “digital” version comes in at 2 hours 47 minuets (including credits). But there was also a special limited 70mm print made available…very limited as there is only one of these prints in this country and it is only being shown in the West End of London. This cut is slightly longer at 3 hours 7 minutes (with an intermission) as there are a few additions. Yet despite how long the film is, I was surprised at how fast it all went by, it didn’t seem like I had sat there in the cinema for close to 3 hours by the time the credits rolled.

As I said before, this is getting very split reviews and opinions. Love it or hate it?
I thought it was good and thoroughly entertaining…I didn’t think it was amazing though as an overall film. Still, I didn’t really think Jackie Brown was all that good when I first saw it and now I think it is (probably) the best thing Quentin Tarantino has written so far. I can see this film growing on me and I’ll definitely be watching it again.

For me, the tension just was not there. Tarantino can write tension brilliantly, see the Dennis Hopper/Christopher Walken ‘eggplant’ scene from True Romance or that toe curling, teeth grinding scene from Inglourious Basterds during the LaLouisiane underground tavern.
Here, there is tension…but it never really feels that tense when it should be with so much distrust and paranoia.

While I didn’t mind the long running time, I don’t think the film needed to be almost 3 hours long at all either. There is nothing wrong with a long run time of the film has the legs for it. As much as I’ll praise the plot, it didn’t need almost 3 hours for it to be told.

It is a good film, most definitely. It was just not the genius that I know Quentin Tarantino can do.
I’d have loved to have seen the 70mm print version, but I’m not travelling to London just to watch a film. I hope that cut gets released for the home market though.

Anyway, those are my feelings on the film. Yeah I liked it…but it just was not a ‘masterpiece’. 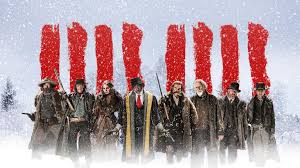 Now to finish up, a few fun things I spotted and some of these do contain spoilers…

Roth’s character’s (Oswaldo Mobray) real name is later revealed to be ‘English’ Pete Hicox. In Inglourious Basterds, Michael Fassbender played Lt. Archie Hicox…some kind of relative? If Vic Vega from Reservoir Dogs and Vincent Vega from Pulp Fiction can be brothers (according to Tarantino, they are), I suppose the two Hicox could be related some way?

There’s some nice foreshadowing with some of the dialogue too. At the start, Daisy Domergue falls out of the stagecoach with John Ruth being pulled out as he is cuffed to her. After the fall John Ruth says “Nearly ripped my god damn arm off!” That line is quite clever for something that happens later.
During the stagecoach ride in the opening, John Ruth asks Major Marquis Warren: “You never stick around to see ’em hang?” Which ties into the ending.
Also John Ruth asks Daisy Domergue “You want a little snakebite in your coffee?” Again, that is quite important in relation to what happens later.
There are probably more little bits I missed too. 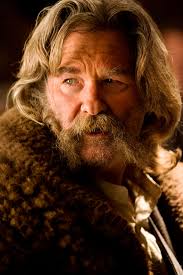 John Ruth: “Yeah, Warren, that’s the problem with old men. You can kick ’em down the stairs, and say it’s an accident, but you can’t just shoot ’em.”