Sorry folks but that clown was about as scary as a fluffy bunny wearing a pink bow. Now I’m not talking about the recent film remake in the cinema that is getting good reviews right now. Oh no – I want to take a look at the original TV mini-series that aired back in 1990.

The story revolves around a groups of kids living in Derry, Maine during the late 1950s who call themselves ‘The Losers Club’. They are haunted by a mysterious creature who manifests itself as the kids most deep rooted fears; a mummy, a leper, a werewolf and most famously – a clown. The kids manage to fight of this creature, this IT and the kids make a pact they they will return to Derry to fight of IT again if IT ever returns.

Of course IT does return later as its stated in the book that IT must feed every 27 years. The kids are now grown up and IT begins to terrorise the children of Derry once more. So as adults, ‘The Losers Club’ reunite to defeat IT once and for all.

So that’s the basics of the novel – lets take a look at the mini-series.

Originally aired on the ABC network on TV in 1990 and split into two parts shown over two consecutive nights totalling a 192 minute run-time – the later DVD release has a 187 run-time and has several scenes removed or shortened. 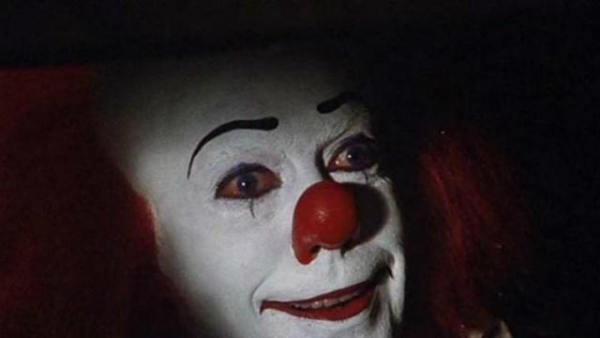 And this is the main problem for this mini-series. The fact it was made for TV in 1990. You see, TV can get away with pretty much anything these days. We have bloody/gory TV shows full of violence everywhere now. But this was not the case back in 1990, while the mini-series does have its share of blood – its really nothing compared to the novel. EVERYTHING is watered down. Just as an example: the novel opens with a kid, Georgie chasing a paper boat down a gutter. This is where we first meet IT the clown, ‘Mr Bob Gray’ as he introduces himself (A.K.A ‘Pennywise’). As Georgie reaches into the gutter to retrieve his paper boat, Pennywise pulls Georgie’s arm off – and this is all depicted in gruesome detail. In the mini-series, you have Georgie chasing his boat and meeting Pennywise who does grab the kid’s arm… and then it cuts to black and you see nothing.

Most of the scenes of this mini-series are just like this, they have the build up, the tension – but the payoff is just not there and you’re left with nothing.

Then there is the structure. The mini-series jumps around every five minuets between the 1950’s period when they were kids to the ‘present day’ as adults. I don’t mind non-linear structure (some of the stuff I write is done this way), but its overused here and gets annoying… really, really annoying. You’re introduced to a character as an adult and it’ll flashback to when they were a kid – rinse and repeat for every single main character in the plot. It fills in the back story but with all the jumping around – you’re left with a headache and not enough time to get to know each character. This is something the new remake corrects as its split into two separate moives with the first one just following the kids and the second flick telling the story of the adults – a much better narrative.

When I say ‘ITs not scary’ I mean in both the sense of the overall story and how its been diluted for TV to the IT character itself. Most of the ‘scares’ in this involve balloons… yes – balloons.

There’s a scene where one character (Mike Hanlon) does his annoying flashback introduction thing and when it cuts back to him as an adult – a balloon is floating next to him and it pops… and this is supposed to be a scare. See the pic above for another example of a balloon scare. There’s another scene where a fridge is opened and a load of balloons come out. There are balloons everywhere in this thing – in fact, I think there are more balloons than characters and its clear they’re really trying to make balloons scary. They just randomly appear and pop – popping balloons are not scary. They can give you a jump in real-life when you’re not expecting it I admit – but in a supposedly scary TV horror adaption?

Director: “I want to turn Stephen King’s IT into a TV series.”

Producer: “That’s quite a violent and bloody book. You sure we can get away with that stuff on TV?”

Director: “Already have that covered – we’ll remove most of the scares, blood and violence and replace it all with balloons.”

Okay so the mini-series has a few decent scary moments… a few. But for something that runs at 192 minuets – its just not enough. I’ve seen scarier Goosebumps episodes and that was a kids TV show.

Now for the main course – Pennywise himself. He comes across as just mildly more scary then all those damn balloons. Now I mean no disrespect to Tim Curry playing Pennywise here as he’s amazing. This mini-series is worth watching just for Tim Curry’s performance alone. He really pours his heart and soul into this role and that shows on the screen… he’s just not scary.

No, not even with those teeth. Not scary. He’s funny – downright hilarious in fact. cracking jokes, making puns and that laugh.

Pennywise: “Do you have Prince Albert in a can? You do! Well you’d better let the the poor guy out! HU-HA-HU-HA-HU-HA.”

This is what he does best. Make bad, outdated jokes while laughing hysterically and he’s brilliant at it too. I love Tim Curry in this and I love his character, he’s just in the wrong genre. Tim Curry should return to the role as a kids entertainer –  I’d hire him for birthday parties. I could watch Curry’s Pennywise all damn day.

IT is funner than it is scary and at times it genuinely feels like a parody/spoof. Have a double feature of this and Airplane! and you’re in for a good time.

Now I know what people are thinking – You’re an adult. Of course its not scary now, you should have watched it as a kid.. Well – here’s my rebuttal. This mini-series was made for adults in 1990, so it was adults that would’ve watched it back then. Besides, I’m in my 40s now. I did watch this as a kid back in 1990 (think I saw it in 91). Its not scary now and it wasn’t scary then either.

There was one clown that scared my back when I was a kid and if I’m being honest, still kind of does now. And that was this fella…

And that was a doll, and inanimate object.

Pennywise is a riot, a complete laugh. If you want a load of un-scary balloons and a damn amazingly comical clown performance then the IT mini-series is a must see. Its rib-crackingly good fun. Its one of the best comedies of the 90s – well worth a watch. A terrible horror but a brilliant comedy.

I’ve not yet seen the recent remake (yet), but it is getting good reviews and people are saying that it is scary… but is it as funny?

One thought on “They All Float! IT Wasn’t Scary At All”