This one caught me off guard.

Robocop is one of my all time favourite flicks. Not only is it one of the best sci-fi/action films made, its simply one of the best films made ever. However, as a franchise, its pretty poor. The original flick is sublime – not just an ultra-violent revenge picture with plenty of action but also a deep and meaningful story underneath about humanity and  redemption. Scratch the surface of this one and you’ll find a whole other film lying in wait for you to discover. Robocop 2 is a very different story. I wouldn’t call it a ‘bad film’ but I can hardly sing its praises either. Robocop 3 is…well it exists.

Then of course there was the Robocop TV series – both of them. The franchise lay dormant for a while before the inevitable remake in 2014. Again a film that is hardly great, nor bad, its just there really. I thought the franchise was all done after the very average remake but if they were to carry on, I assumed a sequel to the remake would be on the cards or another remake/reboot. Well it seems that a new Robocop sequel is very much on the cards indeed. But there is a sting in the tail as its not going to be a sequel to the remake at all. No, this is going to be a sequel to the original…and I’m really fucking excited for it too.

The writer of the original flick, Ed Neumeier is said to be working on a new sequel. Following the recent Hollywood trend of making sequels to failing franchises but ignoring the sequels (Halloween, Terminator). Robocop is looking like its going to be getting the same treatment too. While being interviewed for Zeitgeist magazine, Neumeier had this to say:

“It’s nice that people are still interested in RoboCop and they have me working on a new one at MGM right now so maybe we’ll get another one out of it.

We’re not supposed to say too much. There’s been a bunch of other RoboCop movies and there was recently a remake and I would say this would be kind of going back to the old RoboCop we all love and starting there and going forward. So it’s a continuation really of the first movie. In my mind. So it’s a little bit more of the old school thing.”

What I find interesting about this bit of news is that Neumeier did actually write a sequel to the original Robocop in 1988 called RoboCop: The Corporate Wars but the film was never made. The basic idea behind the film is that Robocop is destroyed and rebuilt 25 years in the future (the future of the future of the world of Robocop). Its been over 25 years since the original flick (over 30 now), so Neumeier could be taking his original idea and tweaking if for today’s audience. 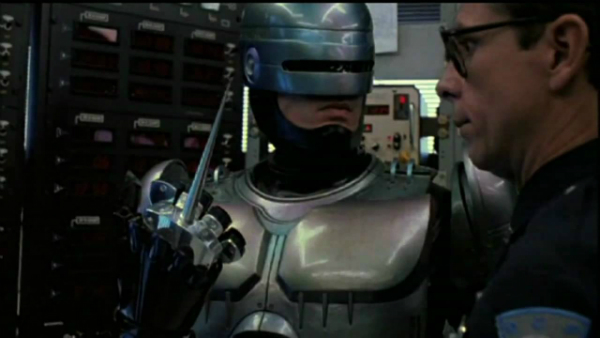 After waiting so long, could we may be getting a real and worthy Robocop 2? I very much doubt a 70 year old Peter Weller will return in the main role – but it would be amazing if he did. Nancy Allen is still going strong too so could be involved in the project, oh and get that mad Dutchman Paul Verhoeven back behind the camera. If this all comes together, it could be awesome. Oh yeah and it needs to be a bloody and violent adult film not some PG-13 shit.

Clarence Boddicker: “Well give the man a hand!”