So I guess this is a kind of sequel to my I Don’t Like Shenmue article. Quick recap, I didn’t like the game when it was originally released and I still don’t like it now. But I did buy the recent Shenmue re-release (with a few minor tweaks). While I played the first game when it was originally released, I didn’t actually finish it – I just got so damn bored and decided to spend all my time in the arcade playing Space Harrier and Hang On instead. I never bothered with Shenmue II because the first game was so damn tedious, though I heard the sequel was far better. Still, when I recently got my hands on the re-release, I told myself I would finish Shenmue this time around before moving onto the sequel. Well I’ve finally finished the first game (god damn it that was laborious) and now I’ve played the sequel…but do I like it?

By and large Shenmue II is pretty much more of the same with some minor refinements, but is that enough to make it an overall better experience? Well right off the bat. You can skip cut scenes and fast forward time to meet a specific deadline, this alone makes this one infinitely better then the previous game, no more needlessly waiting around for hours or days. Straight away I noticed how the world of Shenmue II is much more lively and vibrant over it’s predecessor. There are more people around doing more activities with more buildings to explore. Everything just feels so much more “alive”. The controls are still clunky and getting Ryo to simply turn is cumbersome but they feel a lot smoother though, plus some of the buttons have been switched around which took me a while to adjust to after getting so used to Shemnue’s layout. I have only put in a few hours, maybe 6-8 but in that short time, I’ve found this sequel much more playable and interesting than the first game by far.

Yeah Ryo is still an insufferable bore to play as with zero personality. But thankfully he’s plunged into a version of Hong Kong that’s full of interesting and enjoyable characters coupled with plenty of pleasing locales to explore and play around in/with. Some of the really crappy parts of the original still remain in the sequel, the clunky controls, the boring protagonist, the difficult and sometimes awkward navigation, the annoying look mechanic. But I found the short comings of Shenmue II much easier to forgive over the first game due to how much more interesting and interactive the world is. This sequel just has so much more character and personalty. Personality goes a long way too.

Of course being the huge OutRun fan that I am, my first port of call was to the arcade to see one of my favourite games in all its glory. Sega lost the Ferrari licence a while back (that’s why you can’t buy any OutRun games anymore) so I was curious how they would handle this in Shenmue II. Maybe they’ve removed and replaced OutRun with another Sega classic? But to my surprise as I entered the arcade, there in the middle of the floor was a sit-down OutRun cabinet sparking off childhood memories…and you can still play it too. But due to the lack of a Ferrari license, sadly there is no big red Testarossa to drive anymore. Instead the iconic Ferrari has been replaced with a generic, Ferrari-esque red sports car, no Ferrari badge or any whiff of the Italian car manufacturer anywhere. Still, Outrun within Shenmue II is still an absolute joy to play. I’m a happy gamer.

I begrudgingly forced my way through Shenmue and found very little to enjoy along the way – that god damn forklift truck racing and job is still one of the most boring things I’ve ever experienced in a game. Shenmue II is a very different animal, a game I’m looking forward to spending a lot more time with and a game (unlike the first one) I’m in no hurry to reach the end of, one I want to enjoy to its fullest by soaking up everything it has to offer. Do I like Shenmue II? Oh yes, very much so.

Shenmue plays like a broken, unfinished prototype and in may ways, it is. Given the scope of the game’s designer, Yu Suzuki original ideas for Shenmue and how much it was cut or trimmed back – it is a broken, unfinished prototype. I will never understand the praise Shenmue receives, its a terrible game but an average demo at best. It was back when it was originally released and it still is now. Shenmue II is different. Yeah its a little rough around the edges and yes its slow at times but that roughness is enveloped by a really strong and playable game, one that most definitely deserves all the praise, unlike its predecessor. 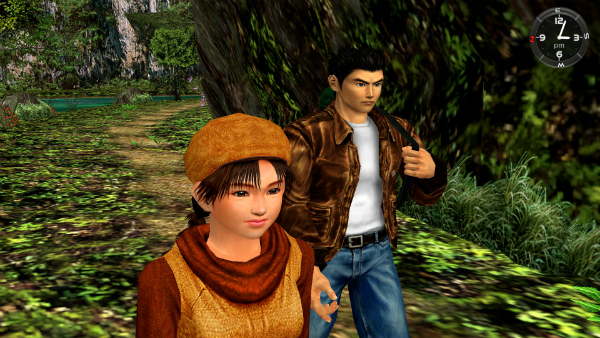 From the first game to this sequel, I’ve been converted, Shenmue II is wonderful title and in a way, I’m glad I didn’t play the game when it was originally released as now I feel as if I’ve found a long lost treasure, a real hidden gem of a game. Now of you’ll excuse me, I have a date with an OutRun arcade cabinet…oh and apparently I’m supposed to help Ryo find his father’s killer – but there’s always time for OutRun.