I’ve been sitting here doing a spot of writing while waiting for Red Dead Redemption II to install on my Xbox. I think the wait from the moment I put the disc in to install and finally pressing the start button for the first time seemed longer than the year long delay. This moment has been a long time coming (eight years) and now I’m about to play RDR II for the first time, I have the appropriate cerveza ready too…

Okay so all I’m doing here is taking a look at the first few of hours of the game. I’ll not be going through the story much or at all if possible. This is just to get a quick look and offer my first impressions, a more detailed and fuller look at the game will come later next week after I’ve spent more time with it. So here we go, I’ll just quickly pop in a SPOILER warning, though I won’t be giving any story elements away except for covering the opening of the game.

Just looking at the title screen has put a big ole’ smile on my face (though that could also be the beer). I fucking loved the previous game, best game Rockstar have made to date if you ask me. Yeah Grand Theft Auto is their big hitting series, but there was just something about RDR that entertained me so much more than any GTA game. RDR was a masterpiece of game design, story writing and characterization… oh and gameplay. This one has a hell of a reputation to up hold, even if its half as good as the previous game, it’ll still be a damn fine title. 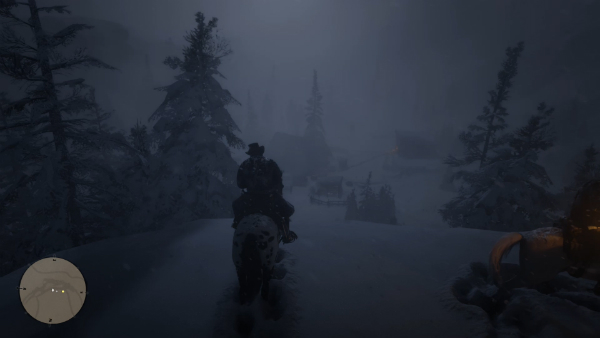 So it all kicks off with Dutch Van der Linde and his gang lost in a snowstorm before they manage to find meager shelter, seems the law is after them. A long cut-scene just setting the tone before I finally get to control Arthur who with Dutch, goes out in the snowstorm to try to find some help and supplies. Dutch and Arthur talk while looking for some help out in the snow and they talk of a robbery gone wrong and a possible set up (you can chose from various conversation points too), the conversation continues and they mention John – I’m guessing it is the John I think it is. I’ve found a house that could offer some help, only things have gone a little sour. Okay so I’m going to jump ahead a little here, the opening chapter goes on a while and just teaches you the basics. That’s not to say its not any good as its great – but I want to get into the whole open world side as the opening is pretty linear. Still the first chapter shows you the new hunting, searching and fighting mechanics, etc plus you get to meet more than a few familiar faces. There’s a lot of new stuff to learn just in the first hour or so of play but it’s the open world I really want to get a look at and play around in, so I’m going to skip this write up forward a little. 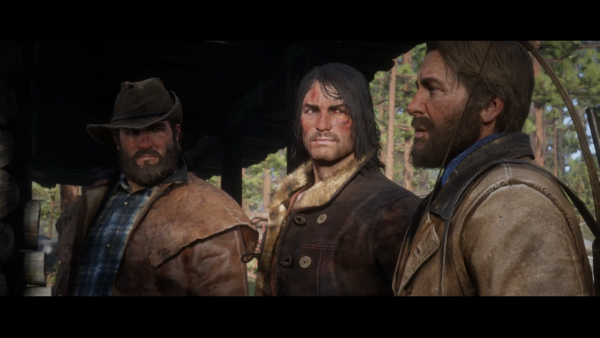 So now it looks like I have the freedom the play around and explore the map, which is really what I want to do. The first thing that hits me is the graphics, damn this game is good looking (for the record, I am playing on the Xbox One X in 4K). The original RDR (I don’t mean Revolver) was a striking game and still is eight years after release. But this? This is a whole new level, RDR II looks sexier than Kelly Brook in a swimsuit and lets be honest, that’s pretty damn high praise…

So our gang have set up a new camp out of the mountains and away from all the snow. This is all looking very Wild West now. Seems I have grown a beard (I mean my character Arthur, not me personally) and you can shave in the game or just that that chin-rug grow. Got a full-on Brian Blessed right now. Looks like you have to support the camp by donating food and money so hunting really has a purpose this time around. But before I got lost in all that stuff, I’m going to head into the nearest town to play around with some of the new features. 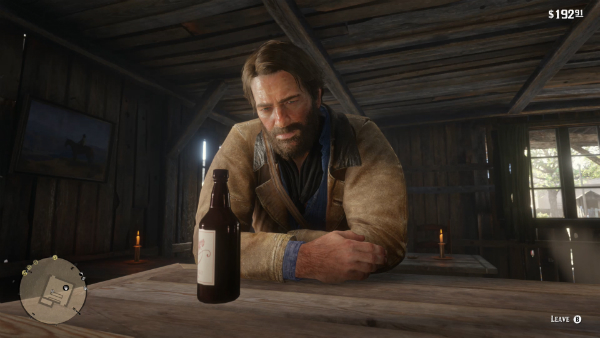 Found a small town called Valentine, it’s not the grandest of places but there’s still a few things to mess around with. Had my hair cut and had a shave. Took a nice hot bath as I’d gotten a little dirty travelling around. Hung out in a saloon and had a few beers, then started a mass brawl. Honestly, it was great fun. Looked like something from a Western flick with people being thrown over tables and out of windows, chairs smashed over their heads and so on – a good old fashioned bar brawl, so satisfying. Did a spot of hunting and sold my wares to the local butcher. Even found a tent that does slide shows for a little entertainment.

Well that about wraps this quick look a the game up. I know I’ve only scratched the surface here, so much more to this one that I’ll discover later. I’ll aim to rush to the end of this so I can do a more in-depth look over the next few days. But so far I’m very impressed. Rockstar have created an impressive and amazing world here. I thought they did a stunning job with GTA V… and they did. But RDR II is head and shoulders above it. The level of detail, the way everything feels alive, the amount of interactions and distractions to enjoy. You know how that This is Spinal Tap quote about going to eleven that is overused? Hell I’m guilty of overusing it myself. Well in order for me to describe this game, they need to make a Spinal Tap sequel.