Hey folks. So first off and for my regular readers. I know I didn’t publish much on this blog last year. I was busy concentrating on other writing projects and that’s pretty much how things will be this year too. I made some great connections in 2019 and got my foot in a few doors, wrote a lot, published 2 books and almost finished a 3rd too, which I’ll be publishing in the next couple of months. Then I also have a few other big writing projects simmering away for 2020. So I won’t have the time to dedicate to this blog as I have in the past, but I’ll still be publishing a few articles through the year as and when I can.

And for my first article of 2020, I take a look at the film that most probably caused the death of one of Hollywood’s greatest acting legends, as well as other connected deaths and some interesting tit-bits about the film as a whole…

Marion Mitchell Morrison, a.k.a John Wayne, a.k.a The Duke. One of the all time Hollywood greats, a true tough guy known for playing heroic cowboys, cops, soldiers and much more. A multi-award winning/nominated actor, including winning the Oscar for Best Actor in 1963 for the film True Grit. A man with a worldwide fanbase that included my granddad. As a child growing up, I remember whenever we’d go round to visit my grandparents, granddad would always have his films on and 9 times out of 10, it would be a John Wayne flick. 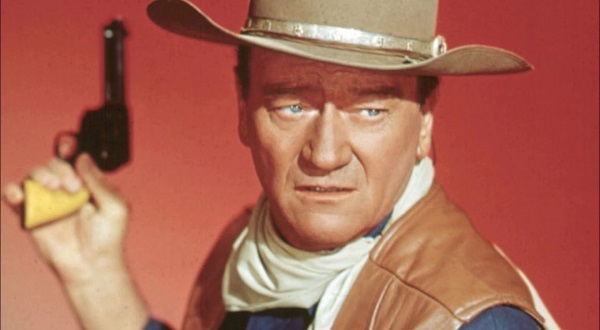 It was the 11th of June, 1979 when John Wayne died of stomach cancer… but the fact he died of cancer is not that unusual. He was a heavy smoker and had a 6 pack a day habit. It’s the fact that more than 90 other people who all worked on the same film as John had developed some form of cancer and by 1980, 46 of those had died from the disease. That film was 1956’s The Conqueror.

I guess that today, some would call the film “racist” or “culturally inappropriate” due to the fact that white American actor John Wayne plays the Mongol conqueror Genghis Khan, complete with some questionable make-up to make him darker and appear more Mongolian. But even if we ignore the slight racism by today’s standards… it’s just not a very good film at all. It was critically panned when released and has gone down in cinematic history as one of those “so bad it’s good” flicks.

Directed by Dick Powell, produced by Howard Hughes (yes THE Howard Hughes) and starring John Wayne along with Susan Hayward, Agnes Moorehead and Pedro Armendáriz. The Conqueror is a hot mess of a film. From terrible miscasting to a nonsensical and boring plot, with some of the worst dialogue you’ll hear in a movie…

“I feel this Tartar woman is for me.”

The Conqueror tells the story of Genghis Khan (John Wayne) falling in love with, Bortai (Susan Hayward). When Genghis Khan kidnaps Bortai, he kick-starts a war. Long story short, there’s some fighting, betrayal and Bortai ends up falling for the Mongol chief and they live happily ever after. As stupid as the plot is… it is loosely based on fact… very, very loosely.

As I said before, The Conqueror is a terrible film and is considered one of the worst films ever made and definitely one of John Wayne’s poorest flicks. It’s terribleness and being slated by critics at the time led to the closure of legendary production studio RKO Radio Pictures due to losing so much money. And if killing off a world renowned film studio was not enough, it could be argued it also killed off a lot of it’s cast and crew too.

And so we get to the meat of this article, just how can a film give more than 90 people cancer? Well it all boils down to where they chose to shoot the film… in the vicinity of a nuclear weapon testing site. Pretty much all exterior shots were filmed at St. George, Utah which was several miles downwind of the United States government’s Nevada National Security Site. The same location with a good chunk of nuclear fallout from testing during Operation Upshot–Knothole in 1953. And if that was not bad enough, then Howard Hughes paid to have 60 tons of the dirt from the site shipped back to Hollywood so any filming done at the studio there would match up with the location.

And that was just the main cast and crew as many others also died from various forms of cancer by 1980 that worked on the film. Then there were cancer scares of people not even in the film at all. Both of John Wanye’s sons, Michael and Patrick visited the location where the film was being  shot and both of them developed cancer related conditions. Michael with skin cancer and Patrick had a tumour removed from his breast. Even Susan Hayward’s son, Tim had to have a benign tumour removed from his mouth. Plus other visitors had to be treated for cancer related illnesses.

Then we get to eccentric business magnate Howard Hughes who was the main producer on the film. Well if you know anything about Howard, then you know he went a bit off the rails in his latter years… and that’s putting it mildly. He went completely bat-shit crazy. Becoming a recluse, living in a Las Vegas hotel for years and storing his urine in bottles were some of his more tame endeavours. While hiding away from public life, he bought the rights to The Conqueror outright and every single print of the film for around $12 million. He reportedly would watch the film on a loop day and night during his final years before dying of kidney failure in 1976.

Around 220 people worked on the film, an estimated 91 of them developed some form of cancer and a total of 46 of them died due to the disease. And those numbers don’t include visitors to the set or the Native American Paiute extras who also worked on the film but were not credited. So the cancer deaths could very well be higher.

I once read a review of a film where the critic made the jokey comment that the film was so bad that it gave them cancer. Well in the case of The Conqueror that claim could very well be true.

“Tomorrow is the most important thing in life. Comes into us at midnight very clean. It’s perfect when it arrives and it puts itself in our hands. It hopes we’ve learned something from yesterday.”