So last year, I wrote a pretty in-depth book covering almost forty years of the British gaming industry. Microbrits: A Tapestry Of The British Gaming Industry was a real labour of love for me and I’m very proud of the book too. I’ve had a lot of very positive feedback and the general consensus is that it’s a damn good read. Full of interesting stories about the British gaming industry and the interweaving tales of those involved.

But it was a little rough around the edges. Several typos, spelling and grammar mistakes. The font was a bit too small and it could’ve been formatted a little better too. So while I’ve been in lock-down due to this whole coronavirus thing, I thought I’d re-edit Microbrits. 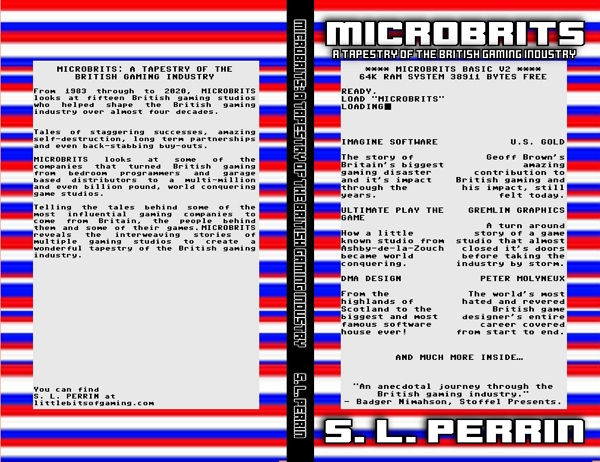 I’ve used a slightly bigger font, corrected all the typos and grammar errors… I think. Removed sentences and even entire paragraphs, generally smoothed everything out to make it easier to read too. Plus it’s been updated with new info. Oh, and an all new retro cover as well. But despite editing and removing chunks of the book, it’s now bigger than it was. Partly down to the larger font and mostly due to the general editing and adding new information. Microbrits has grown from an 81,000 word book to a just shy of 87,000 words and from 174 pages to a 204 page book.

Fifteen British gaming studios covered. I look at the people behind the companies and some of the games that made them famous. The book is designed so you can jump in and read about any of the studios you like. But if you read from cover to cover, then a wonderful interweaving tapestry of the British gaming industry is revealed. Tales of spectacular failures, back stabbing buy-outs, amazing partnerships, rags to riches stories and so much more. Microbrits is a must buy for the gamer of a certain age just for a fantastic nostalgia trip, or even brilliant read for younger gamers who want to pick up a little history of not only how the British gaming industry began, but how it grew and evolved into a worldwide phenomenon.

You can find both the Kindle and paperback versions right here from Amazon, available for worldwide shopping too. Grab yourself a copy and enjoy an anecdotal journey through the British game industry.