I grew up watching seventies chop-socky flicks. Those distinctly cheesy, bad effects, badly dubbed, masters with long beards teaching students type of kung-fu films. Before Bruce Lee came along and revolutionised Hong Kong cinema, proving that kung-fu films could be so much more and even break down boundaries with Enter the Dragon, there was this unique brand of martial arts films that captured my heart from a young age.

Over the years, there have been a few games that have tried to emulate seventies kung-fu flicks. Titles like Shao-lin’s Road, Kung-Fu Master or more recently Invincible Tiger: The Legend of Han Tao, among others, have all tried to bring some of that Hong Kong, chop-socky love to gaming. From developer Sobaka Studio comes a new game hoping to capture some of that stylised kung-fu cinema magic with 9 Monkeys Of Shaolin. But is it Bruce Lee’s Fist of Fury amazing or Jackie Chan’s New Fist of Fury atrocious?

Set during the Chinese Year of the Water Monkey in 1572. You play as Wei Cheng, who’s parents were killed by Wokou (Chinese pirates) when Wei was a child. Taken in by his grandfather, Wei learns all about the family fishing business… as well as how to fight with a staff. Now a grown man, Wei’s village is attacked by bandits, his grandfather is killed and Wei is left for dead. Buddhist monks find Wei and nurse him back to health. This is when Wei learns those bandits were actually deadly Wokou. With the help of the monks, Wei sets out for revenge.

At heart, 9 Monkeys Of Shaolin is very basic scrolling beat ’em up fare. If you’ve ever played Double Dragon, Streets of Rage, Battletoads (just not the new one) or similar, then you’ll know exactly what to expect here. Move around the levels and smack the crap out of bad guys with various attacks. Even though 9 Monkeys Of Shaolin does have that basic style gameplay, there’s a lot more going on beneath which adds so many more layers to the gameplay. 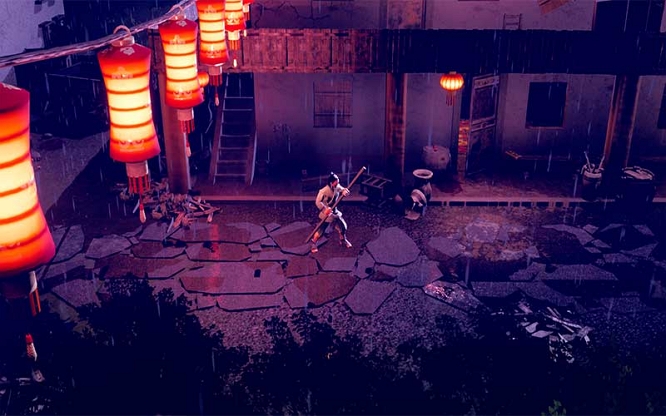 You have your standard quick-light attack, a slower-heavy attack, a thrust raged attack and a dodge move. Then there’s a deflect/parry move which is used for defence, stringing together moves by mixing things up will build your combo score, bigger combos give you more points. Finish levels to earn reward points and use those points to spend on upgrades and for your moves. You can swap your standard staff weapon for something else, with different weapons having different modifiers and abilities. Special equip-able items and footwear, numerous variables that allow you to create a character they meets your own playstyle. These weapons and items are earned just by finishing the various levels ion the story.

There there are the additional attacks by holding down the left or right trigger buttons and pressing one of the three standard attacks. You’ll soon be learning acrobatic moves and magical attacks that will cause enemies to float, slow down and even pull enemies toward you, all of which can be upgraded. The story is split into five different chapters, each representing a clan of the Wokou that attacked your village. With each chapter featuring multiple levels and a boss fight. The levels themselves can be really creative and often offer something unique along the way, fight in a sawmill and you’ll find saw blades that need to be dodged, storms can bring lighting strikes that can hit you and the enemies, levels in long grass will slow you down and make enemies harder to see. Honestly, 9 Monkeys Of Shaolin really does offer a lot of little nuances that add layers to not just the levels but also the fighting itself.

Different enemies have their own strengths and weaknesses, meaning you’ll need to experiment with your variety of attacks to discover the best way to deal with each enemy type. And if that’s not enough for you, the game still offers more. There’s co-op action so you and a friend can play though the entire story together. Either online or even some old school, couch co-op. There are little statues hidden on the levels which unlock amusing gameplay mods. Remember GoldenEye 007 on the N64 with it’s big head, paintball mode, etc? Well you have some of those style unlockables here too. Give your character a big body, the emeries big heads and so on, just to add a little comedic slant to your game.

I did manage to finish the game in one sitting, in around four hours or so. It’s not a huge title at all. There are twenty-five levels, which does sound like a lot, but each level can be finished in just a few minutes. Still, you don’t really want a title like this to needlessly drag on anyway. 9 Monkeys Of Shaolin doesn’t outstay it’s welcome and neither did it feel too short. Besides, even though I finished it, I am going back to find all of those secrets and even try to finish it on the hardest difficulty. I really enjoyed this slice of retro beat ’em up action. 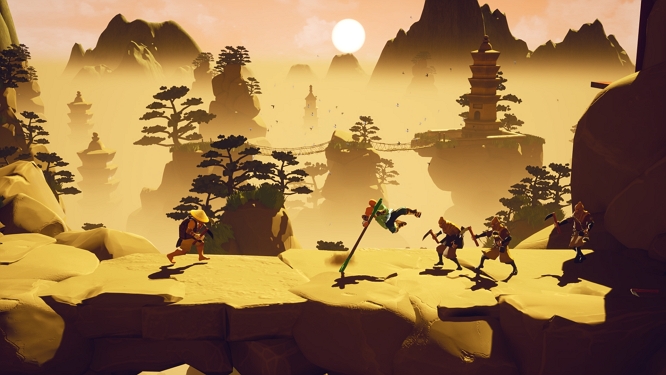 The only thing negative I really have is that the game never really goes full seventies kung-fu flick style, aesthetically speaking. I’d loved for it to have had a Chinese language with English subtitles to add a layer of authenticity. Maybe some seventies style film grain (could be one of the hidden extras, I’ve not yet found them all). A funky seventies soundtrack. But those really are just very minor niggles. 9 Monkeys Of Shaolin is fantastic and as an old school beat ’em up fan, this really scratched an itch.