As one of the world’s greatest radical free thinkers, moral philosophers and finest word-smiths ever once stated:

Yes, I do ‘wanna get dirty’ Christina and I am going to too, as I look at Codemasters Dirt 5, the latest in the Dirt franchise of racers.

This series of games has a bit of a confusing past. Originally a spin-off from the successful Colin McRae Rally franchise and called Colin McRae: Dirt. The Colin McRae name was dropped after 2009’s Colin McRae: Dirt 2 following the tragic death of McRae in 2007. The games then just became known as Dirt (insert number here). But just to make things that little bit more confusing, the Dirt series had it’s own spin-offs too, Dirt: Showdown, Dirt Rally and Dirt Rally 2.0. All in all, there have been a total of seven Dirt games (even more if you include the original Colin McRae titles) in the series, not including this new one, Dirt 5, which is the eighth game. Make sense? Anyway, about the game itself.

As the title may suggest, Dirt 5 is not a ‘normal’ racing game. You won’t find a showcase of exotic supercars and famed race circuits here. No tearing around Monza in a Ferrari F-50 à la Forza Motorsport or Gran Turismo. This is all about off-road racing, not necessarily rallying as such, just not racing on roads and race circuits. In fact, there isn’t any actual proper rally mode in Dirt 5. What you get instead are various disciplines/events based on off-road racing, but more on those later. First up, what does this game offer?

Well, if you’ve ever played any notable racing game in the last few years, then you’ll pretty much know what to expect here. You’ve got your basic game modes. Arcade gives you both Time Trial and Free Play. Time Trial gives you the choice of any of the cars and tracks, then it’s just you against the clock, going for fast times. This is a great way to get used to the tracks and cars without having to worry about winning (or losing). Free Play races are a single race events on any of the tracks. With both Time Trials or Free Play, you’re given a decent amount of options to customise your experience too. There are ten different locales to choose to race in including (but not only) Brazil, Greece, Morocco, USA and South Africa. Then each locale has from four to twelve tracks/events to race. You can customise each race with what class of car to use (super lites, modern rally, cross raid, 80s and 90s rally and more), with each class having multiple cars to choose from. Then you can change the weather, clear skies, rain, snow or dynamic weather. Select the time of day from dawn to night racing, you can also choose the speed at which time passes.

You can even customise your chosen vehicles. Change its base colour, add patterns, decals, sponsor logos and more. It’s not exactly Forza Motorsport levels of car customisation, but to be honest, that kind of deep car design isn’t really needed here. What is here, is quick and easy to use. You’ll be making your own custom liveries in no time with little to no fuss.

There’s a great mode called Playgrounds, here you get to drive around and have fun in custom made Gymkhana arenas. Don’t know what Gymkhana is? Well just click this link, but to put it in basic terms, Gymkhana is an event where you can take a car and throw it around an open area full of obstacles. Slaloms, jumps, donuts, drifts, anything you really want to do all in the name of big fun. In Playgrounds mode, you can try out other people’s custom created Gymkhana events and areas, of which there are already plenty of, even though the game has not yet been released (as of writing). Or if you feel up to it, you can create your own. There’s a very simple, easy to use creator mode which allows you to knock up your own OTT events with a pretty intuitive build mode. Place a start gate, fill the area with jumps, banked turns, flaming rings to jump through, barriers to help create a tight turns, numerous obstacles… even loop-the-loops and so much more, then place a finishing gate and enjoy. With very little time and effort, I was able to knock up a fairly rudimentary, stupidly silly but enjoyable event. I think those who love to create will get a real kick out of the Playgrounds feature.

So it’s on to the big one, Career mode. For me, this is where the real meat of any racing games lies. I’ve played a few racers in my time, and very few of them have a truly engaging career mode. Dirt 5‘s is actually pretty damn good. There’s a lot here to unwrap. You start be creating your avatar, nationality, race number. You can even create a player card, a kind of ID for your character. Choose a backdrop card from various designs, a lanyard, nickname, a sticker and an effect to give the whole thing a bit of pizzazz. But the main course are the races and events. 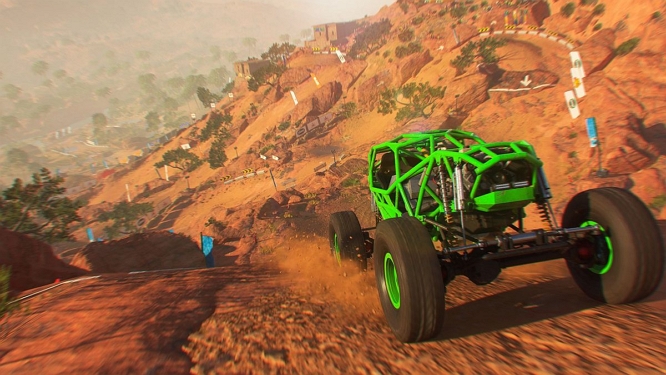 As I previously mentioned, there are various disciplines/events to play around with. Ultra cross, Rally Raid, Land Rush, Stampede, Ice Breakers, Sprints, Path Finder and of course Gymkhana. To be honest, a few of the events are fairly indistinguishable from others and just feel like lap or checkpoint races… just with a bit of a rally twist. But there are some pretty stand out events that really impressed me. From racing over the frozen East River of Roosevelt Island, New York to trying to make my way up Dadès Gorges, Morocco in a huge wheeled rock bouncer. The Career mode here will have you playing though all of the events as you progress to become champion.

Career mode also features sponsors, with different sponsors offering different pay-outs and bonuses. Pay you’ll ned to buy new cars for when the events get trickier later down the line. And there are a tonne of vehicles here to play around with. I was going to do a car count, but with all the different disciplines, each having their own set of cars… I kind of got lost in it all. But let’s just say, there’s a lot of cars here. I’ve not finished Career mode as I write this, not even close, but I have put a fair few hours into it and still not bored. Always looking forward to what the game is going to throw at me next.

Graphically, Dirt 5 is a real looker too. The environments can go from the lush greens and quite frankly, beauty of China with cherry blossom leaves falling, to the snowy slopes and icy climate of Norway and the Northern Lights, or the rugged rocks and very brown-ness but sunny climate of Arizona.

Then there’s the weather effects, for me, a true test of a racing game’s graphics and Dirt 5 does not disappoint. Dynamic weather means that you can start a race in the dry, but give it a lap or two and it’ll be chucking it down with rain. That rain affects the race too as the already muddy tracks get more and more wet, more muddy, to the point where they can become waterlogged. Puddles form and grow, the tyre tracks from previous laps fill with water. The snow is really effective too. There’s a race quite early in Career mode where you start on a track lightly covered in snow, the snow continues to fall. As the race progresses, the snow settles and by the time your on the last lap, the track has gone from a light dusting to several inches of the white stuff. Mud gets caked to the cars as they slide and drift around corners, pyrotechnics and lasers shoot into the sky at the side of the circuits, providing some great background effects and confetti cannons litter the tracks in bright coloured paper and more. 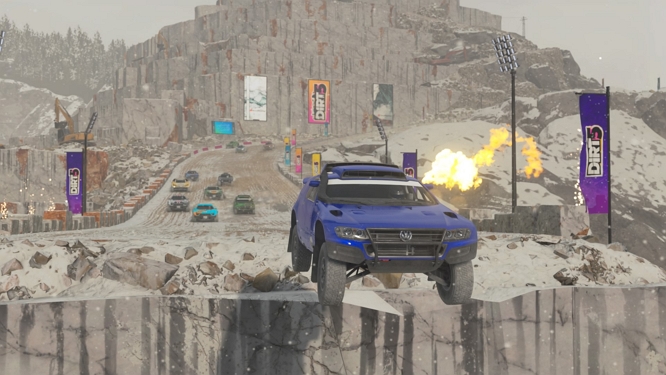 There’s also an online mode, but to be honest, I’ve not played it yet. I may update this review to reflect my views on that later when I’ve played it. But if the rest of the game is anything to go by, I’m sure it’ll be great.

Confession time, this is the first Dirt game I’ve put some decent time into. I’ve dabbled with some of the previous titles, but never really got onto them fully. Dirt 5, quite honestly, has really pulled me in. But there is a bit of a warning coming up. Dirt 5 is pure arcade action, previous titles did edge more toward the sim kind of racer. Never full simulation sure, but sim-like. This more arcadey approach could turn some Dirt fans off. Plus, as I mentioned earlier, there are no actual proper rally events. But on the other hand, others may find this one a lot more accessible to play.

Still, for me, this is the most fun I’ve had with a racing game for a while now. I’m really looking forward to finishing the Career, I’m sure I’ll also lose a lot of time making my own Gymkhana events. Plus, I’m pretty excited to see what Codemasters have planed for future DLCs. I think I’ll be getting a lot of play out of this one. If you want a bit of OTT rally-esque racing, then you can’t go wrong with Dirt 5. It’s fast, it’s frantic and it’s fantastic.