Growing up in the eighties, I was an F1 fan. It was my older brother who got me into the sport. Every Sunday, we’d sit and watch F1 on the TV without fail. I never really understood the sport back then, that didn’t come about until years later as I grew older. But what really made me watch was nothing more than a great looking colour scheme. My favourite colour has always been black (yes I know that technically it is not a colour, but a lack of colour), so I used to watch the John Player Special Lotus cars, they looked awesome on the track. But there was something more than special about one of the cars, the bright yellow helmet of Ayrton Senna.

That’s pretty much how I became a fan of the Brazilian driver, just because I liked the black car and how Senna’s yellow helmet design really stood out against that JPS Lotus. From then, Senna was the man to watch, the most exciting and talented driver on the F1 circuit. He became huge when he drove for McLaren in 1988 where he won his first championship and rewrote the record books along the way. By the early nineties, Ayrton Senna was the greatest F1 driver around and that was when one of the biggest gaming companies in the world approached him about making a game using his name.

Now, licensed games had already been around for a while and several sporting stars happily signed off the use of their likeness and name to make some quick and easy money, without having to do any real work. So of course, Senna jumped at the chance to have his name on a video game. Only unlike other sportsmen who just signed a contract and waited for royalty checks to come in, Ayrton Senna wanted more than just his name on a game, he wanted to help create and design the game itself. Senna wanted to ensure the game in question was not just some cheap cash-in, he wanted it to represent not just him, but also the sport he loved. That game was Ayrton Senna’s Super Monaco GP II.

The Monaco GP franchise actually dates back to 1979 with the first Monaco GP title. And despite the ‘II’ in the title of Senna’s game, it was actually the fourth in the series, with Pro Monaco GP and Super Monaco GP released in 1980 and 1989 respectively. But just how involved was Ayrton Senna with the game that boasted his name? Well, that’s exactly what this article is going to look at.

It was 1991 and Sega were one of the biggest names in gaming who were already famed for their driving games. Ayrton Senna was three-times F1 World Champion, the youngest ever three-times F1 World Champion (or he would be by the end of the year). It was the ultimate team-up. It was a company called Tec Toy S.A (later renamed TecToy) that made the connection between Sega and Senna. TecToy were a Brazilian based company, known for publishing and distributing Sega’s wares in Brazil. Their HQ was also in São Paulo, Senna’s home town. Interestingly enough, TecToy co-founder, Daniel Dazcal died in May of 1994, the same month and year that Senna died.

Anyway, then president of TecToy, Stefano Arnhold, approached Sega in mid-1991 before Senna had won his third championship, as the 1991 season was in full swing, and asked them if they would consider making an Ayrton Senna game. At the time, Senna was world-famous, especially in Japan the home of Sega. So it made perfect sense for the two to work together. Plus, there was the fact that Ayrton Senna had already appeared in the previous Super Monaco GP from 1989… Okay, so it wasn’t exactly ‘official’ and the driver’s name was G. Ceara, who came from Brazil. But come on, look at the following comparison image and tell me that’s not meant to be Senna.

Anyway, Sega were already working on a sequel to their Super Monaco GP game when a deal to have the game endorsed by Ayrton Senna was added. As mentioned, Senna wasn’t interested in just having his name attached to the game, he wanted to help make the game too. Senna was even credited in the game as producer and supervisor. Another interesting credit in the game is the project manager ‘Oibaf Odahcam’, which when spelt backwards is Fabio Machado, who was Senna’s cousin and handled most of his business affairs. Getting back to the point, Senna used his encyclopedic knowledge of F1 to help make the game as authentic as possible (for the time). I mean, we are talking about a racing driver who would stand trackside during practice sessions to listen if other cars were using illegal traction control or not. Apparently, Senna refused to lend his name to the game if Sega didn’t allow him to offer his input. The Brazilian was pretty damn serious about making the game, unlike other famed names that were happy with just making money off their name.

One of the things Sega wanted to include was actual voice clips from Ayrton Senna himself. These clips would provide tips for the various tracks, only there was a bit of a problem. One of the races was to be for the Barcelona track, but Senna had not yet raced on it at that point as it was a new track added to the F1 calendar in 1991. As he had not raced on the track, he refused to supply any tips for it, feeling it would be disingenuous. This actually put the release of the game into jeopardy, but Senna just point blank refused. So, Senna agreed to record a voice sample immediately after driving on the track… And he did too. Ayrton Senna drove on the Barcelona track for the first time in 1991, finished in 5th place and then recorded his tips and sent it to Sega in Japan the same day.

In October of 1991, Senna and Arnhold of TecToy were in Japan. I mean, there was a Grand Prix to take part in. While there, they both went to Sega’s HQ to talk about the development of the game. Reports say that when Senna arrived at Sega’s HQ, the employees just stopped working so they could meet the man. He was such a huge star in Japan that he had that kind of power, to stop a four hundred strong employee count, as they scrambled to meet Senna and get his autograph. What was supposed to be a quick 40-minute meeting turned into an over three hours long fan-fest. Ayrton Senna quite happily met his fans and signed autographs too, even though he was there on business. Still, while at Sega’s HQ, Senna met with the development team of the game and talked them through the real F1 tracks and cars, giving them as much info as he could. The following pic is from that very visit with Senna talking to the dev team at Sega’s HQ in 1991. 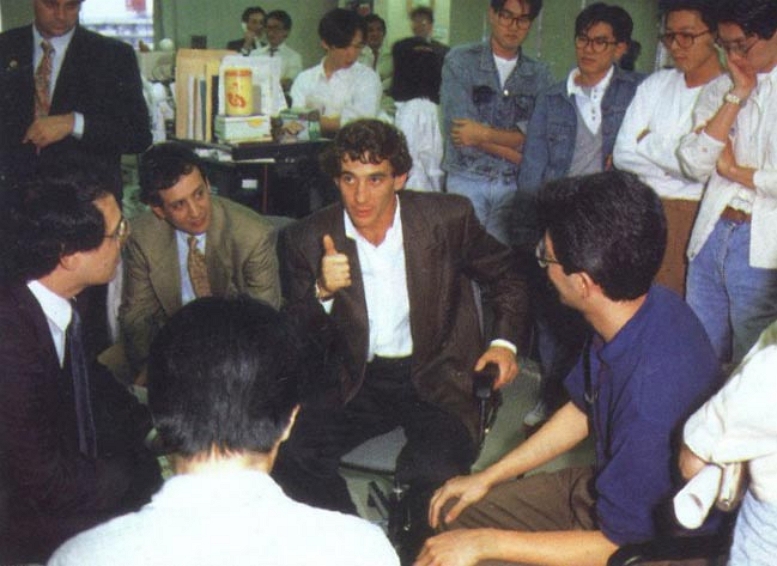 It was also at that meeting when Senna pitched the idea of creating three new racetracks. Tracks designed by Senna himself and that were included in the Senna GP mode of the game. The development team quizzed Senna on his favourite circuits, which Senna discussed with the team in great detail as the team took copious notes, hanging on his every word as he described every corner as only Senna could. The Brazilian also talked in depth about car handling, speeds and more. One major point Senna wanted to make was the use of the track’s rumble strips. In the first Super Monaco GP, using the rumble strips would slow you down and punish you for using them. Senna disliked this as it was nothing like real-life racing, the rumble strips are often used by racers to help with cornering. So Senna got the dev team to make the use of rumble strips more realistic for his game. When Senna was happy that the development team were taking him and his ideas seriously, he gave permission for his likeness and name to be used.

Ayrton Senna got his manager to give the dev team VIP passes to the Japanese GP that he was taking part in just a few days from that meeting. This allowed the team to see F1 up close and help implement ideas into the game. After that meeting, Ayrton Senna relaxed, took in the beautiful country of Japan. Then just a few days later, he won the Japanese GP. There were more meeting between Ayrton Senna abd Sega’s development team as the game was worked in through the rest of 1991 and the start of 92.

When in development, the cartridge used for the game was going to be bigger than the standard used at the time, but budget and time constraints soon put an end to that. So in order to get the game to fit on the 8-meg cartridge, things had to be cut. You know those voice-over tips for the tracks that Senna recorded? Yup, gone. Replaced with text tips, still written by the man himself though. However, Senna’s voice is still in the game, except they are just smaller snippets compared to what was originally planned. When released in the summer of 1992, Ayrton Senna’s Super Monaco GP II was a massive hit, especially in Japan and Brazil… obviously. The fact it was based on the 1991 F1 season, the year Senna won his third championship title probably helped with the sales too. The great man himself even got in on the advertising campaign for the game, at least in Japan.

There were rumours that due to the success of the game, that Sega wanted to make another in the franchise with Ayrton Senna and covering the 1994 season. However, sadly, Imola 94 put an end to that idea. Ayrton Senna’s Super Monaco GP II was one of the best racers on the 16-bit Mega Drive and is still much loved among retro gamers today. In 2014, fans made a patch that gave the game the proper FIA 1991 licence with all the correct drivers and cars, etc. All of which took the game a step closer to the authenticity that Senna wanted from the very start.

Ayrton Senna’s Super Monaco GP II is a rarity in the sub-genre of celebrity-endorsed sports games. In that it was actually really good, authentic (given the time and limitations of the hardware) and that it wasn’t just a cheap cash-in because it had a sports star on the front. Ayrton Senna wanted the game to be as good as it could be and his direct input can be felt throughout the title too.

Ayrton Senna’s Super Monaco GP II is more than just a game, it’s a testament to the legend that was Ayrton Senna’s attention to detail, his love for his sport and his drive for perfection. The game is part of his legacy as a man, a hero and the greatest F1 driver of all time.