Man, the Cobra Kai TV show is far better than I ever thought it would be. I’ve been gripped for all three seasons so far, and with season four coming at the end of this year, I’m pretty damn excited. For those not in the know, Cobra Kai is a sequel TV series that continues the bitter rivalry story of Daniel LaRusso and Johnny Lawrence from The Karate Kid film(s). Of course, there’s much more going on than Daniel-san and Johnny’s dislike for each other as a whole host of other characters join the story. Along with some fantastic returns of other characters from the movies to boot.

Anyway, part of that rivalry between the two leads stems from the original The Karate Kid flick. In Cobra Kai, Daniel is a rich and successful businessman. Beautiful wife, big house, kids, etc, he’s got it all. But Johnny’s life, following the film, went in a very different direction. He’s more of a loser, doing odd jobs to put food on the table, living in a shitty apartment and so on. The two opposing lives are put down to the fact that Daniel LaRusso won the All Valley Karate Tournament in the first film, beating the previous two-time winner, Johnny Lawrence.

When the two first cross paths after so many years in Cobra Kai, the karate tournament that Daniel won (thanks to Mr Miyagi) by beating previous champ Johnny is brought up. So too is the fact that Daniel won via an illegal kick to the face, the famous crane kick move. For many years, even before the TV show, the internet has been swamped with people claiming that Daniel won the tournament illegally, using an illegal kick to the face. Pretty much everyone is stating that Johnny was the rightful winner of the fight as Daniel should’ve been disqualified, or at the very least, shouldn’t have been given the winning point, for using an illegal move. Most people are in agreement that the ending of The Karate Kid and Daniel winning is a major plot hole. So much so that the whole thing has become a very famous meme, then there’s the fact that it has now become canon within the universe as Cobra Kai itself even brings up the fact that Daniel shouldn’t have won in the show. So then to summarise, it is now in-universe fact that Johnny (incorrectly) lost the 1984 All Valley Karate Tournament due to Daniel basically cheating. But here’s the question, was the kick to the face actually illegal as many claim, and was it a plot hole that Daniel won?

Well, that’s what I’m here to cover. I’ve done a few of these explorations of plot holes and I always use the same handful of rules. I can only use in-movie universe logic, I can’t just make shit up to suit my own agenda. I can’t use explanations in novelizations, comic books, etc and only what’s in the film(s). Deleted scenes are a bit of a wildcard, depending on why they were deleted. Example, if a scene was removed against the director’s better judgement, because the suits forced it to be cut, then I can think about using it. But if a director cut a scene over something like time constraints, then that’s a bit more questionable as, if the director didn’t think the scene was worth fighting for, then why should I? So, with the rules in place, it is time to destroy this plot hole that Daniel used an illegal move and Johnny should’ve won.

Okay so, getting back to the point. Daniel’s kick to the face was not illegal at all and the many years of memes and videos are wrong. Of course, you’ll want proof of this claim, right? It’s not as if you’ll just going to believe something written on the internet with zero evidence to back it up, are you… Kind of like how this whole thing started then eh? Okay, some proof. First, here’s a little montage of the ending fights, just give it a watch and tell me what you see.

Okay, I’ll bring up a few highlights for you. Starting at 0:53 in the video, Johnny delivered a kick to the face and wins the point. Directly in front of two judges. Perhaps you missed it, well here’s a screengrab for you.

So if kicks to the face are illegal, then why did Johnny win that point? Then later, we have Daniel take a kick to the face from Dutch of the Cobra Kai dojo. Is his opponent reprimanded for the face kick? Nope, he wins the point. Again, screengrab for you. 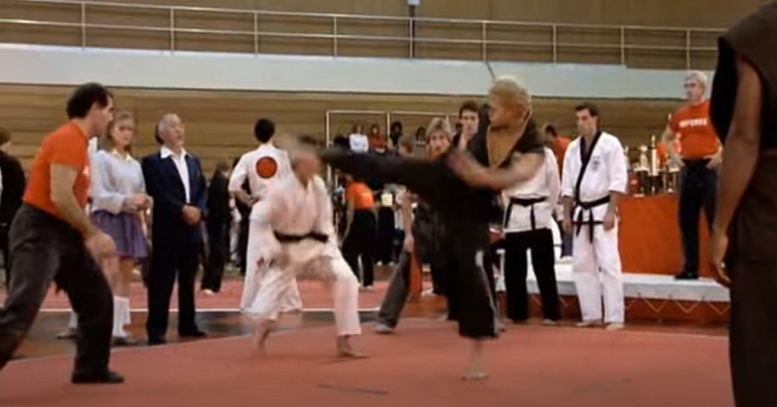 Aside from the fact that, given the obvious reasons, the kick doesn’t actually connect in real life. Within the reality of the film, it did and the point was awarded to Dutch against Daniel, and in front of the judges too. In fact, if you go back and re-watch the various fights in that final tournament, you’ll see multiple examples of people winning points from kicks to the face. Johnny wins three points via kicks to the face alone, one against Daniel. None of those kicks are deemed illegal either.

So there you go, head/face hits score a point. So given the fact that multiple people win points with blows to the head through the entire tournament… How or why was Daniel’s winning kick illegal? I mean, even Ralph ‘Daniel-san’ Macchio himself has said that the kick was illegal… But it wasn’t. In the article I linked to there, Ralph states that:

“No hits to the face was clearly something when the referee made the list of things what not to do.”

Errrr, no. The ref never says hits to the face are not allowed, neither do any of the other judges. Nobody in the first film says that hits to the face are illegal. Want more eh? Well, here’s a line taken directly from the film where the rules of the tournament are explained to Daniel:

“Everything above your waist is a point. You can hit the head, sternum, kidneys, ribs. Got it?”

Daniel’s kick was legal, there is no plot hole.