Some side-scrolling, action-platforming now as I take a look at The Skylia Prophecy. From developer ERMedia and publisher 7 Raven Studios comes this very old school looking game. Seriously, just from looking at a single screenshot, I got a SNES, Super Castlevania IV vibe. And perhaps the Castlevania games are the best comparison to make here too.

Skeleton enemies, dark and foreboding graphics, energy bar and item HUD. Yup, definitely some deep Castlevania vibes here. The influence behind The Skylia Prophecy is pretty clear to see. But the big question is, is it on par with Konami’s classic action-platformer franchise? Well, let’s check it out.

Playing as Mirenia, armed with a shield-sword. You have to kill demonic enemies that you accidentally let out, or something. There is a story, but I have no idea what it is. See, the game starts with a heavy text-scroll at the start… And then there’s nothing about a story after that. It seems that the game sets up a plot, but very quickly ignores it once the action begins. So if the plot isn’t up to much, then the gameplay really needs to be tip-top to keep you entertained. Sadly, it’s not.

The gameplay of The Skylia Prophecy is ‘strange’ to say the least. It’s not terrible, but strange. Yes, it is yer basic hit enemies with your weapon and jump on platforms malarkey, but everything just feels ‘off’. Take the combat, for instance, you can hit directly in front of you… And that’s it. You can’t duck and attack, which is really ‘effing annoying as there are plenty of snakes, spiders and the like that are low on the ground that you need to duck and hit. Instead, you have this shield thing that you just hold out in front of you and have to wait for the enemies to walk into it, cos you can’t move while you use it. Yeah, there’s a jump attack, but you can’t block while jumping, which is a real pain when an enemy shoots a projectile at you mid-jump and there’s nothing you can do other than take a hit. There are no other moves, no upgrades for your weapon, no different weapons either. 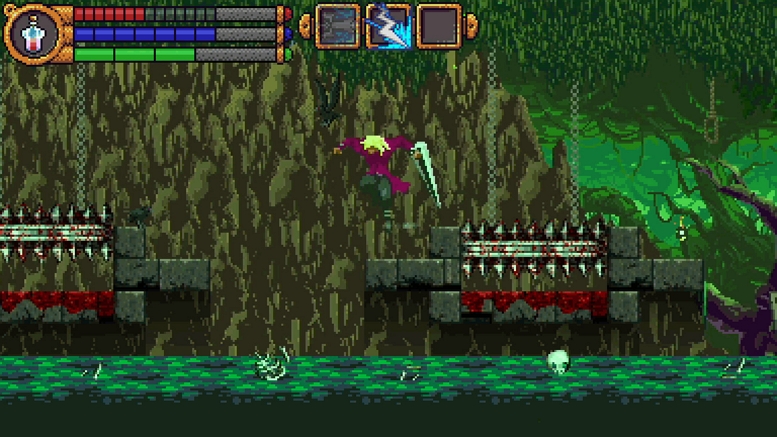 Now, there are magic attacks and you will unlock other ones as you play. But they eat away at your mana reserves so much that you will only get two or three uses before you have no mana left. Yes, you can refill the mana bar, but you have to buy potions from a shop to do that… And then, you can only carry one potion at a time. That also goes for health potions, one at a time. You also buy keys from the shops in the game… Again, you can only carry one at a time (seriously, give Mirenia some pockets). This is partially annoying as you’ll come across many locked doors, so you’ll have to keep going back to the shop to buy a key (singular) every time you want to open a door. However, there is a character that appears next to lock doors if you don’t have a key and offers to give you one for a ‘favour’. No idea what that is as you just know it can’t be a good thing, it’s better to just backtrack to the shop and buy a key… One at a time. Oh, and the enemies don’t drop anything, no potions, no keys, etc. The only place you can get them is the shop, and remember, you can only carry one at a time too.

Platforming wise, you can’t jump through or down from a platform. So (for instance) if you need to get to a higher point, you can’t just jump up though to the higher level, you have to navigate to the end of the platform, then jump up. As for not being able to jump down, that just gets really infuriating as you can actually get stuck in places and have to traverse a very long way around just to go back down. Yeah, I get that The Skylia Prophecy is trying to emulate that ‘old school’ gameplay, but there are times when that’s a good idea and times when it’s not. And when you have some awkward level design, not being allowed to jump up or down through platforms is just annoying.

In terms of the level design, things get very ‘messy; with infuriating maze-like shenanigans and often long treks between the action. r the bane of lazy level design, doors that take you back to the start with no warning. You’ll stop off at villages between the dungeons, but it’s all very samey after the first two. You talk to the same people who will tell you largely the same things. Even the graphics of the villages look pretty much identical, just that the buildings get moved about a bit. It never feels like you are going anywhere in the game even when you are.

You only have one life, once your health reaches zero, you’re brown bread. Thankfully, you don’t start the game from the beginning as there are checkpoints. But pretty much all of the checkpoints are put in such maddening palaces that you may as well start from the beginning most of the time. In fact, as the game doesn’t have enemies that drop goodies, you can get stuck if you don’t have any mana left. Honestly, it happened to me a few times where I needed to use a magic attack to progress, but I had no mana. No potions to top up my mana either as you can only carry one, and I already used it. So I had to restart and load up my game to try again.

In terms of price, The Skylia Prophecy will only set you back £5.79 and there’s no denying that’s a decent price point. But that low cost does reflect the quality of the game. Now, The Skylia Prophecy isn’t a terrible game at all, but it certainly won’t leave you claiming it to be ‘game of the year’ either. As far as I can tell, this is the work of one person working alone and you really have to respect that. But, that doesn’t mean the game gets a free pass for being so ‘awkward’. It’s a very clunky title that seems to be lacking in any real depth or truly rewarding gameplay. It feels more like an unfinished demo than a complete title. It really is a shame too, as you can definitely feel the love for the Castlevania franchise and other games of its ilk… But it just never quite comes together as it should.

I really, really wanted to love this game, as I am a big fan of the genre. But some rather poor and lacking combat ideas, very questionable level design and a really annoying/limiting inventory system really lets this one down. The Skylia Prophecy could’ve done with some feedback/QA and another few weeks of development. Overall, it’s a very average game that is too restrictive to be any real fun and it just does not seem to get anything right. It’s just ‘okay’.