Ohhh yeah. A cheeky little Halloweeny game review just in time for Halloween. This game just popped into my review list two days ago too. I’ve had to jump it up the queue of reviews to get it done in time. From developer Nicolas Meyssonnier and published by Headup Games comes Pumpkin Jack. Now, this was originally released last year but it has had a bit of an upgrade and released for the next-gen of consoles recently, just in time for Halloween.

So, what is Pumpkin Jack? I’m glad you (I) asked. What we have here is a spooky themed, all-out action-platformer massively inspired by the likes of the PlayStation 2 era of 3D platformers, with titles like MediEvil. You play as long dead and serving in hell, the famed scoundrel Stingy Jack. Now, Jack’s soul has been put into the body of a pumpkin… Pumpkin Jack, if you will. You work for the Devil himself and the big red as unleashed an evil horde on the Arc En Ciel Kingdom to destroy all human life. The humans have their best wizard working on stopping the evil horde and it is your job to stop the wizard. If you do, the Devil will grant your soul passage into the afterlife.

So yeah, you’re the bad guy here. I mean, you do work for the Devil and all. Gameplay-wise, this is all very (as I said) typical PS2 era 3D platforming action and if you were a fan of those games, you’ll feel very much at home here with Pumpkin Jack. Everything from the type of platforming, to the graphic art, all feels very 1998… and that’s not a bad thing at all. There’s something about this style of platformer that is dated, and yet it feels very warm and welcoming at the same time. Playing as the titular Pumpkin Jack, you’ll traverse the Arc En Ciel Kingdom meeting various characters such as an owl that kind of becomes your guide, a crow that works as a projectile attack and a merchant that sells you various character skins. Those skins are purchased with crow skulls that you’ll find hidden in each level. You can also find gramophones hidden on each level for some… dancing fun.

The levels themselves are this kind of linear-open thing. There is only ever one path to take and you’ll never get lost, but they still allow a little exploration here and there. Each level is littered with enemies to beat up using a basic hack ‘n slash type mechanic. Then, of course, there is plenty of platforming action too. Pumpkin Jack even throws in some variety with basic puzzle solving and even a bit of vehicle use. You’ll find yourself riding a minecart, (ghost) horseback riding and even a bit of water traversing heavily inspired by the myth of the River Styx. The game really offers up quite a lot of variety to break up the standard platforming action. Everything (obviously) has a very spooky theme and playing it at this time of the year as we fast approach Halloween really does add a layer of immersion.

While Pumpkin Jack doesn’t do anything new, it never really needs to, to be honest. This is a title that knows exactly what it is and never tries to be anything other than a very typical platformer. Everything is so ‘standard’ in terms of gameplay, you go through the levels, beat up bad guys, jump on platforms and fight a boss with an attack pattern at the end. However, that ‘standard’ gameplay just works so damn well. Like putting on an old comfy pair of slippers on a wet and windy Autumn night, Pumpkin Jack is just so familiar to the point of making you feel very comfortable.

The graphics and art style is wonderfully vivid and very Halloweeny indeed. Bright and bold with very heavy use of orange, green, purple and blue colours to really hit that spooky theme home. Each of the levels looks distinctly different from each other too and all offer something rather unique about them. If I do have any gripes about Pumpkin Jack, then those are that I felt the game was a bit too easy. I never felt challenged and the only times I did die in my playthrough was due to some mistimed jumping. Never once did any of the enemies in the game trouble me and all of the bosses were a bit of a walkover once you learn their attack patterns. Selectable difficulty levels would’ve been a great idea. Also, you can get through this game in around 5-6 hours. There’s really nothing to drag you back into it either. There is the finding of all of the hidden crow skulls and gramophones I guess, but I never really felt the need to do so myself.

Still, the negatives for this game are greatly outnumbered by the positives. Pumpkin Jack really is a wonderful throwback to that late-nineties and early-noughties platforming age. What is even more impressive is that the game was the work of one person, Nicolas Meyssonnier developed Pumpkin Jack single-handed. I do have a major soft spot for indie gaming and I love it when a small team knock out a great title. For one person to make a very playable game alone, that is just masterful work and a real showcase of dedicated talent that I can’t help but admire.

Well, it’s time to wrap this one up and I always like to look at how much a game is being sold for and tell you if I think it is worth it. For Pumpkin Jack, you are looking at spending around £25… though it is on sale for Halloween depending on the format (Steam, PS and Switch are all 50% off right now, as of writing). With a £25 price point, I feel that’s a tad too much for what you do get, £20 seems fairer to me. As great as Pumpkin Jack is, it is still a simple and basic action-platformer that doesn’t do anything new, plus that 5-6 hour playtime and lack of any serious difficulty does make the game feel just a little bit ‘lesser’. If you’re a huge fan of that era of platformers, then I say go for it regardless. This is a damn great game and plays very well indeed. Still, if you can get it in the sales currently on, for 50% off, Pumpkin Jack is a must buy and really suits a play through about now as we get closer to Halloween. 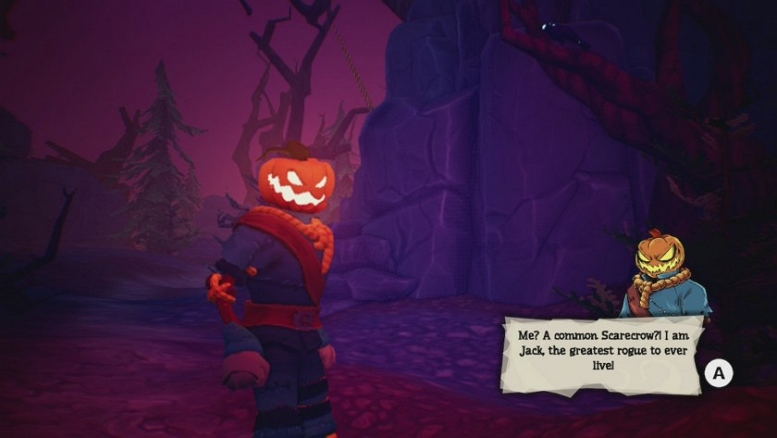 Pumpkin Jack is a wonderful and loving throwback to an era of platform games that has long passed and often forgotten. Solid, no-nonsense gameplay with a very nice spooky aesthetic that is just perfect for Halloween.