I’ve got something a little different for review today. We Were Here Forever, from developer and publisher Total Mayhem Games, is a new co-op puzzle game. As this is a co-op title, I teamed up with my friend Lord Badger from Stoffel Presents to do a co-op review. Over a beer or two and the internet, we got to grips with exactly what this game was all about. But is it any good? Well, let’s find out.

Just as a quick aside, Badger does not know what I’m putting in my review and I have no idea what he’s going to say in his. Even though we have spent a good few hours playing this together, we’ve not really said much about it to each other as we wanted our reviews to do the talking for both of us. I’ll be linking to Lord Badger’s review at the end of this one.

“You and your fellow prisoner are trapped in the realm of Castle Rock – were you betrayed, or simply not that clever? To escape, you must explore the sinister castle for puzzles and plot your escape together. Secrets and riddles are hidden in the shadows. Just be aware that nothing is what it seems in this mysterious Antarctic adventure. Can you two escape together, or will you be trapped… forever?”

As already covered, We Were Here Forever is a co-op puzzle game. There is no single-player option, so you and a friend have to team up. You find yourself trapped in Castle Rock a mysterious realm and have to escape from an equally mysterious castle and a rather sinister jester. This is actually my first experience with one of these games, as We Were Here is a franchise. Starting with the first game, We Were Here from 2017, We Were Here Forever is the fourth game in the series. I went into this one completely blind after Lord Badger kindly offered me a review code and a chance to review this game with him.

So, how does this game work? Well, your two characters are separate for large sections of the game and you have to communicate with each other via in-game walkie-talkies. Yes, you’ll need to have access to a microphone/headset to play. The in-game walkie-talkies work like real-life ones too. So you can’t talk over each other and have to press a button before speaking. Communication is key here as you’ll often be the eyes and ears for the other player and them for you. You’ll be spending huge chunks of this game explaining things to the other player, as they can not see what you can. Puzzles will need clear and concise communication between the two of you to be solved. Think of this as a digital version of putting an Ikea shelving unit together with your partner, if one of you was blindfolded and the other had their hands tied behind their back, with you being in different rooms… and with no instructions. You need to keep your wits about you as well as your cool, as you talk each other through what is going on. 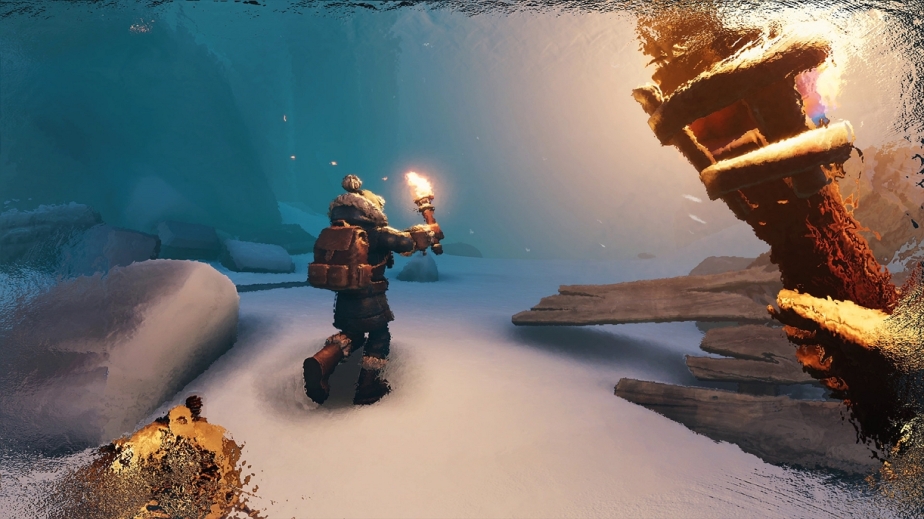 Then there are several parts of the game where you do meet up and both have to face the same puzzle together and can both see the same thing. Even then, it may not be entirely clear to either of you and you’ll need to combine both of your noggins to solve whatever puzzle the game throws at you. I really want to go into details with some of the puzzles here but at the same time, I don’t want to spoil anything and have you be surprised by what you need to do.

I have an issue with a lot of puzzle games and that issue is that the puzzles get very ‘samey’ very quickly. You get games that offer basic push square block into square hole type puzzles and have to repeat them ad nauseam, with a few very slight variations. With We Were Here Forever every puzzle felt unique and as if you have to engage a different part of your brain to solve it. With some puzzles, you’ll know the solution from the second you see it, but actually solving it may require more work than you first realise. Then there are puzzles that can leave you utterly bewildered with the solution, even when you can clearly see what needs to be done.

I’m sure this is something that Lord Badger will mention in his review too, but anyway. We both became completely flummoxed quite early in the game. I’m not going to say what the puzzle was exactly, but it involved seashell images on a fruit machine-type thing, where the reels spun after a set amount of time. We knew what we had to do but we just could not see how to do it. We tried any and everything that we could think of. We scoured the environment, just in case we missed a clue. We re-tried any and everything that we could think of again. Around 2 hours is what we spent on this one puzzle… 2 ‘effing hours. It was getting late and we were both tired, both physically and mentally. So we called it a night and went to bed… separately, I must add.

Anyway, the next morning and the first thing we did was send messages to each other trying to work out the puzzle. Badger told me that he had to sleep on the sofa because he kept tossing and turning, annoying his missus, because he was trying to work it out. We both played it over in our minds and just could not see the solution. Then, Badger had a ‘eureka moment’ and sent me a message saying that he’d just worked it out. Within minutes, we were both back and playing We Were Here Forever and yes, he was right. It was stupidly simple too. But that is just how the puzzles can work here, yes you can get completely stumped but not through bad game design. The puzzles can all be solved if you use the old noodle and even if the solution may not be clear at first, there is always a logical resolve, even if you are overlooking the most simple of ideas. 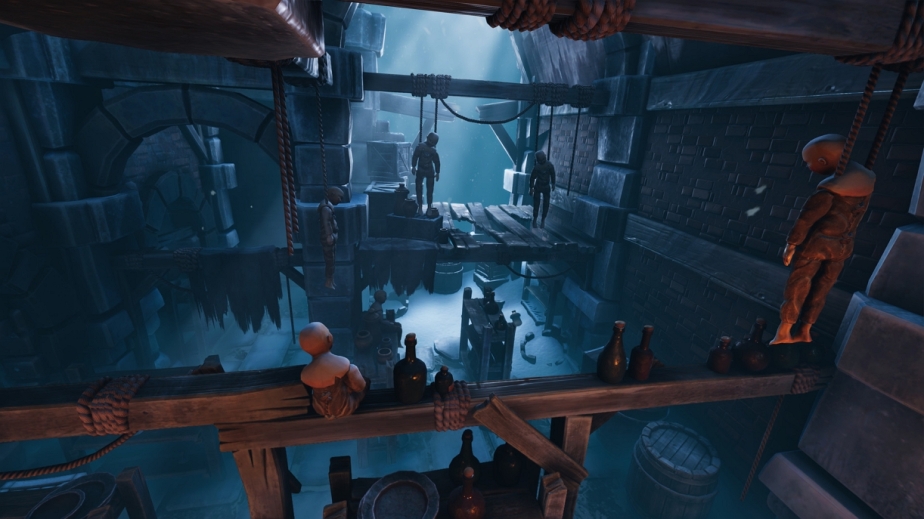 I do just want to quickly go over how We Were Here Forever looks. It may not be a graphical powerhouse but it does really create a mood and atmosphere that is pretty damn impressive. From dark and gothic scenery that looks like something from a Tim Burton nightmare. To weirdly bizarre, twisted-jester, bright neon light areas that are oddly calming and unnerving at the same time. You even get to explore the depth of the sea. Plus, you can play rock paper scissors with each other via animated avatar emotes.

I did have a few niggles with We Were Here Forever. As Badger and I were playing a pre-release version, there were a few bugs that need ironing out. We had a part of the game where I became trapped in a small corridor with a locked door at either end. Nothing to interact with and no way to open the doors, I was well and truly stuck. At the same time, Badger had fallen into a pit with no way out of it, we were both stuck. So we restarted the game and we think that we missed something because when we restarted, a cutscene played and we were moved on to the next part. There was also an instance when our in-game walkie-talkies stopped working. Badger couldn’t hear me and I couldn’t hear him… which was a major flaw in a game where communication is key. Still, I know there has been an update to work on some of the issues, so you probably won’t experience them yourself.

Some puzzles can take way too long to describe the scenario that you are in, to the other person. To the point where you can spend more time describing them than solving the puzzle itself. There was this one puzzle with a huge wheel that could be turned and tiny symbols that needed matching. It would take ages to explain to the other person which tiny symbol was where, etc. Still, if you are so inclined, you can just take a picture of what you are looking at and send it to your partner instead… not that we did that… honest. Is it ‘cheating’? Possibly but it really is a timesaver.

So then, is We Were Here Forever worth the coin? £15 is what this will cost you, bearing in mind that will be £15 per person, you can’t both play from the same copy. As I write this review, we have not yet finished the game (it’s been a bit tricky to find the time when we have both been free to play) but we have got pretty far into it. I do like to know how long a game takes to reach the end credits of, before I pass judgement. So I did take a quick look at a few other reviews and it seems that you are looking at around 10-12 hours of playtime… maybe 15 hours if you get stuck on a single puzzle with a stupidly simple solution for a few hours *cough*. That is a decent length for the money and I really have enjoyed the game so far.

I really am looking forward to playing more with Badger and getting to the end. The puzzles have been great, well-thought-out and wonderfully conceived. Every single puzzle we have come across feels different to the last and every single one of them had us working together in a variety of different ways. Testing both of our logical thinking minds and pushing us to use the grey matter more and more. We Were Here Forever is a fantastic game to test the strength of a friendship.

As I said earlier, this is the fourth game in the franchise but my first time playing one of these titles. I am very impressed, Were Here Forever has subverted my preconceptions of the puzzle game genre that I often find a bit tedious. It won’t be a game that you will come back to time and time again because well… you’ve already solved the puzzles. But the 10 hours or so of game that you do get and the enjoyment of teaming up with a friend or family member… or even a complete stranger, is a thorough joy. We Were Here Forever is available on Steam right now, the console versions are coming very soon. A big recommendation from me.

As for what Lord Badger thought? I honestly don’t know as I write and publish this. So here’s a direct link to his review that I’m about to read myself.

One thought on “(Co-Op) Game Review: We Were Here Forever”