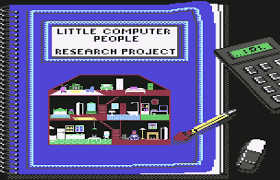 Little Bit of History: This game was designed by David Crane and Rich Gold, published by Activision and originally released in 1985 for the Commodore 64, ZX Spectrum and Amstrad CPC with several other ports on other machines coming later in 1987. The game manual made out that little computer people were “real” and did live inside your computer.

Little Bit of Plot/Story: There was no “goal” to achieve. You just interacted with your little computer person in their house in various ways in their daily life from simple day to day tasks like reading a newspaper, watching TV, etc to playing poker with you the player. All via simple commands you would input.

Little Bit of Character: There were no characters to speak of really other then your own little computer person that would be randomly generated each time you loaded up the game.

Little Bit of Influence: The game was most definitely the forerunner for games like The Sims and other life sims of today, in fact Will Wright (creator of The Sims) as said that he used to play Little Computer People and even had one of the game’s designers, Rich Gold offer feedback when he was developing The Sims.

Little Bit of Memories: I recall never really playing anything like this before. There was not real “game” here but it was still massively absorbing and fun to interact with your little computer person. Each time finding a new interaction or animation.

Little Bit of Playability: While not as deep of innovative as todays life sim games, I still found this great fun to play and waste time on. It’s minimalistic, but still enjoyable. 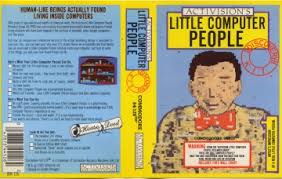