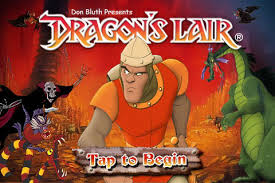 Little Bit of Plot/Story: Simple and classic plot of you attempting to rescue a princess from a castle where she is being held by an evil dragon.

Little Bit of Character: You play as Dirk The Daring with Princess Daphne being your rescuee. Singe the dragon was the main villain along with Mordroc the wizard.

Little Bit of Influence: Aside from a sequel and other games in the same genre like Space Ace. This game set the path for FMV games of which there was a craze of in the 90’s. It also blended games with film for the first time and even introduced what we now call quick time events (QTEs).

Little Bit of Memories: I always recall the huge lines to play this game, the fact it was always the loudest game in the arcade and you could always hear the attract modes booming voice over before you even set foot inside. Seeing the game for the first time was simply amazing as we were used to much more “simpler” graphics. You’d see classic games like Pac-Man, Space Invaders, etc with their basic pixel graphics…then Dragon’s Lair standing next to them with it’s super smooth animation and cartoon art style.

Little Bit of Playability: Honestly, I never found this game playable back then and still do not now. You have more interactivity just messing around with menus on a DVD/Bluray. In fact you can get this game on DVD. There is zero playability in this game and it could be finished in around 10 minutes if you knew what you were doing. You’d be better off just watching the animation on YouTube as a cartoon. 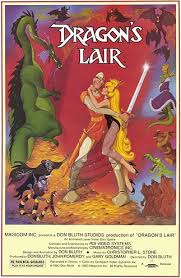