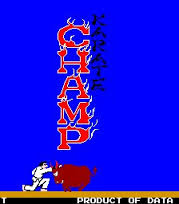 Little Bit of History: Released in 1984, developed by Technos Japan and published by Data East. Originally released as a one player game and later re-released as an updated two player cabinet. Introduced a new and innovative two joystick control method.

Little Bit of Plot/Story: No real story here, just two guys fighting to score points. First to two full points wins the round, win two rounds and you move onto the next fight interspersed with bonus rounds such as punching a bull or avoiding objects being thrown at you off screen.

Little Bit of Character: Aside from the two main fighters, one in white and one in red. There was the fight judge and the girls you fight over in the two player version.

Little Bit of Influence: Definitely the genesis of the standard “tournament fighters” we have today from clear influence on Street Fighter. One of the main characters in a white karate gi and the other in a red karate gi really brings to mind Ryu and Ken from the Street Fighter franchise. You can thank this game for your favorite fighting games of today.

Little Bit of Memories: Another one of those games that reminds me of family holidays, playing this in the arcade. My brother was particularly great at this game and spend a few 10ps learning the moves and filling up the high score table with his moniker. I also remeber this game making an appearance in the Jean-Claude Van Damme film: Bloodsport.

Little Bit of Playability: Very much still playable today. I downloaded it for my iPad and enjoy it thoroughly. It’s a game unlike modern fighters in that seeing as one hit can lay you or your opponent out, it’s more strategic and you have to think about your attack and defense a lot more.