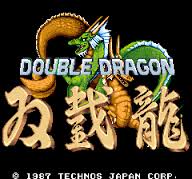 Little Bit of History: Released in 1987. Developed by Technos Japan and published by Tatio. Double Dragon was originally developed to be a sequel to Technos earlier game, Renegade. But during development the game, it was decided to make an all new IP and Double Dragon was born.
Double Dragon was ported to every popular game machine at the time from the Atari 2600 to the Amiga 500.

Little Bit of Plot/Story: You play as Billy Lee in single player or with Jimmy Lee when played in Co-op as you fight the Black Warriors gang with the main goal of trying to save Billy’s girlfriend Marian who is kidnapped during the game’s into.

Little Bit of Character: Along with the two playable brother characters Billy and Jimmy Lee (renamed Hammer and Spike for the American release). There was also plenty of NPCs such as Marian who is Billy’s girlfriend and gets kidnapped at the beginning of the game.
Various enemies:
Linda Lash: was a female character that used a whip.
Abobo: was a recurring sub-boss throughout the game.
Williams: was the most common and basic enemy in the game.
Willy: was the main and final boss of the Black Warriors gang.

Little Bit of Influence: While not the first scrolling beat em’ up, this game certainly popularised the genre and laid the foundation for the direction the genre would go in for decades. The game went on to spawn several sequels, spin-offs, crossovers and even an animated TV show, a movie and even a Marvel published six part comic book. It has also gone on to be remade and rebooted several times

Little Bit of Memories: I’ll always remember this as the very first arcade game I ever completed. I even remember where, it was in Barmouth, Wales in the middle one of the three arcades that used to be on the sea-front while on a family holiday. It was also the first NES port I played at a friend’s house.

Little Bit of Playability: The arcade version is still a good, pointless romp and still very playable today though some may find it dated. But with such a rich legacy, there’s bound to be another Double Dragon game you may find more to your taste. My personal favorite was Super Double Dragon for the SNES which added a lot more variety and interaction to the game. Or there is the more recent Double Dragon Neo.
But for me the arcade original will always hold a special place in my heart and yes I still find that version good fun to play today. 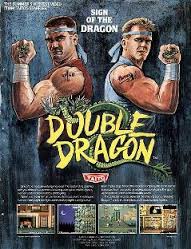 One thought on “Double Dragon – Arcade”