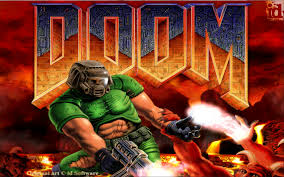 Little Bit of History: Released in 1993, developed by id Software and published by GT Interactive. DOOM (yes, it’s supposed to be spelt in all caps) was the follow up to id’s Wolfenstein 3D and set the foundations for the FPS genre from that point onwards.

Little Bit of Plot/Story: You play as an unnamed space marine fighting hell spawned demons that are invading the Mars base you have been posted to.

Little Bit of Character: Aside from the unnamed space marine (commonly called “Doomguy” by fans) you would cross paths with various enemies like: Hell-possessed soldiers, Demons, Imps, Cacodemons, Lost Souls and Spectres.
There were also end of episode bosses like: Barons of Hell, a Cyberdemon and a Spiderdemon.

Little Bit of Influence: Well this is DOOM, while not the first FPS, it certainly was the game that made the FPS genre popular with everything released for years after being a “DOOM clone”. Plus DOOM became it’s own franchise with sequels, spin-offs, a board game and even a live action film.

Little Bit of Memories: I still recall the first time I ever saw this game on the PC and how amazed I was. The graphics were like nothing I had seen before and unbelievably bloody and gory. The kick-ass music still resonates with me today. I also recall this game introducing me to the mod community for the first time and being able to play all new levels created by regular players and even all new game modes…Simpsons DOOM anyone? This game was also one of the first I recall that featured online play.

Little Bit of Playability: Still a massively enjoyable game today, with it’s selection of weapons and easy to play style. It’s not a complex game at all, but sure is satisfying as hell. Plus you can download perfect ports on modern day consoles now. I urge anyone to try it out. It’s mindless nonstop shooting action at it’s best.