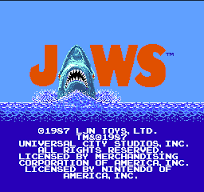 Little Bit of History: Developed by Westone Bit Entertainment and published by LJN for the NES, relased in 1987. Loosely based on the move of the same name and also takes inspiration from Jaws: The Revenge.

Little Bit of Plot/Story: You are captain of a boat (possibly The Orca) sailing between 2 different ports. Along the way you collect conch shells which are used as currency in the game. You spend the shells on upgrades and slowly build up your boat and eventually kill the shark.

Little Bit of Character: No real characters to speak of in the game as everything/one is unnamed.

Little Bit of Influence: The game never really went on to influence anything, it was relased and forgotten about pretty quickly. Though it does make a cameo appearance in the “antique” shop during the 2015 segment of Back To The Future II.

Little Bit of Memories: This was one of those games you may have rented over a weekend and regretted it. It was hard to remember 5 minutes after you played it, nevermind 28 years after it was relased.

Little Bit of Playability: This was hardly playable back then and definitely has not stood the test of time. It’s a horrible, grind-fest with shallow gameplay. Avoid it like a hungry great white shark.

This is just one part of my 40th birthday celebration of Jaws. Take a look at my overview of Jaws Unleashed as well as my look back on the first “summer blockbuster” and how Jaws almost never made it to the big screen.