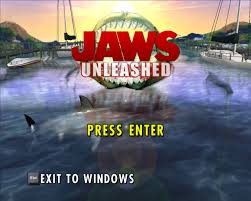 Little Bit of History: Developed by Appaloosa Interactive and published by Majesco Games (THQ in Europe) and released in 2006. A pseudo-sequel to the original 1975 film and was relased for PlayStation 2, Xbox and Windows.

Little Bit of Plot/Story: Amity Island is growing thanks to prestigious company: Environplus. But a growing population on Amity attracts a killer great white shark. Environplus CEO’s son is eaten by the killer shark and the CEO hires shark hunter Cruz Raddock to track and destroy the great white monster. Meanwhile, Marine Biologist Michael Brody tries to capture the shark for research.

Little Bit of Character: Michael Brody (son of Martin Brody from the original film) is joined by Amity’s Mayor; Vaughn and Cruz Raddock the shark hunter. Oh and a great white shark who is the star of the game.

Little Bit of Influence: The game was developed by the same team that made Sega Mega Drive classic Ecco The Dolphin and you can see a similar gameplay style here too. A sequel of sorts was relased called; Jaws: Ultimate Predator relased in 2011 for the Nintendo 3Ds and Wii. Plus there have been similar games relased on iOS and Android like; Hungry Shark Evolution and even an official; Jaws Revenge game too.

Little Bit of Memories: I remember this one being really good fun, mainly as you get to play as the shark. The game used an open world/sandbox style allowing you to explore the environment and kill swimmers, seas creatures and even destroy boats and scenery. The shark itself had quite a few moves it could pull off including; ramming, jumping out of the water and even whip its tail. It was a violent and bloody game…bloody good fun.

Little Bit of Playability: Yes, still playable today and I recommend the PC version if you can get it as it runs a lot smoother. It’s good mindless fun, causing mass destruction and eating swimmers while being a killer great white shark has never been so much fun. 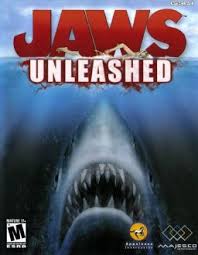 This is just one part of my 40th birthday celebration of Jaws. Take a look at my overview of Jaws – NES as well as my look back on the first “summer blockbuster” and how Jaws almost never made it to the big screen.