ThunderCats was massively huge when I was growing up in the eighties. There was the awesome animated TV show, an extensive toy line, comic books, a TV movie and the series was revived and updated in 2011 and again in 2020… though I never watched them. There was an attempt to make a live-action movie, to be released in 2010, which never happened. More recently, there’s been news of another attempt at making a ThunderCats flick.

I loved ThunderCats and would regularly tune in to watch the show before playing with my Lion-O action figure and trying to fill up my Panini ThunderCats sticker album… which I never did manage to do.

So here, I’m going to take a look at ThunderCats: The Lost Eye of Thundera and some of the other ThunderCats games that never quite were… or were but not quite ThunderCats.

ThunderCats: The Lost Eye of Thundera was developed, published and released by Elite Systems in 1987. Originally for the Amstrad CPC, Commodore 64 and ZX Spectrum with ports for the Atari ST and Amiga coming later. The music was from game music legend, Rob Hubbard (none of which was ThunderCats music… for a good reason that will become clear later). The game’s plot was pretty damn simple and had Mumm-Ra stealing the Eye of Thundera. With you playing as Lion-O who has to traverse fourteen side-scrolling levels to get the Eye of Thundera back and rescue the other ThunderCats who have been kidnapped. Lion-O starts the game armed with only the Sword of Omens and has to jump, hack n’ slash his way through the levels. Along the way, you can find a short-range laser gun and some levels even have Lion-O use a flying vehicle (that I didn’t recognise from the TV show) to get through the level. Each level has a time limit and when that expired, an image of Mumm-Ra would appear and he would summon more enemies making the levels harder to complete.

All you had to do was get to the end of each of the fourteen levels, after which, you would be greeted with a disappointing end game screen stating that Mumm-Ra has been defeated and the Eye of Thundera has been restored.
It was all very simple stuff and lacked any real depth of gameplay, yet the game received positive reviews when released. No idea why as it wasn’t very good. Anyway, for the longest time, I believed that was all there was in terms of ThunderCats games. As I said, while researching for this game, I found some interesting info that there were other ThunderCats games made and even released, I even played them years ago without knowing they were supposed to be ThunderCats games until very recently. But before I do get into those games a little more interesting information…

This game, ThunderCats: The Lost Eye of Thundera wasn’t even originally meant to be a ThunderCats game at all. You see, Elite Systems obtained the ThunderCats license to make games and set about doing just that. However, they were unsure they could meet the up and coming Christmas 1987 release deadline. So they hired another company (Paradise Software) to develop another and separate ThunderCats game just in case their game was not finished in time. So there were actually two different ThunderCats games being developed at the same time by two different companies, one in house by Elite Systems themselves and another outsourced to Paradise Software.

This brings me to those two official ThunderCats games that were actually being developed by Elite Systems and Paradise Software simultaneously. Believe it or not, they were eventually released… just not as ThunderCats games. The one from Elite Systems had its graphics changed and Lion-O was switched out with Sir Arthur. The game was then pitched to Capcom as a sequel to the classic Ghosts ‘n Goblins as Elite did the home computer ports of that game. They titled the game, Ghosts ‘n Goblins: Beyond the Ice Palace. However, Capcom were already working on a sequel themselves at the time. so turned down the Elite’s game, ultimately releasing Ghouls ‘n Ghosts in December 1988. So Elite Systems just dropped the Ghosts ‘n Goblins name and assets, altered the graphics again and released the game anyway as…

Beyond the Ice Palace, which hit shop shelves in 1988. Developed and published by Elite Systems for the Amiga, Amstrad CPC, Atari ST, Commodore 64 and ZX Spectrum. So, if you have been keeping up, that makes this game the one that was originally intended to be an official ThunderCats game, but due to time constraints, it was altered and proposed as a Ghosts ‘n Goblins sequel. That didn’t work out so the whole Ghosts ‘n Goblins moniker was dropped and the game was released as an all-new IP instead. 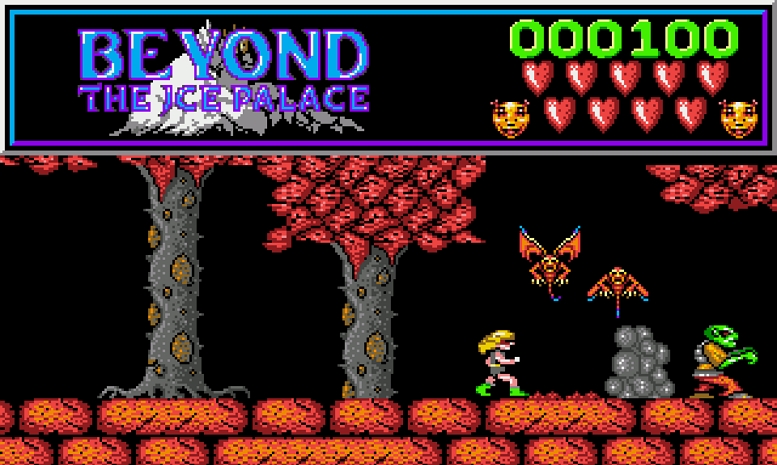 The game shared quite a few similarities to Ghosts ‘n Goblins gameplay-wise, with collectable weapons similar to those found in Capcom’s classic game. A lot of the platforming was very familiar too, as were some of the enemies. You really could see this as a sequel to Ghosts ‘n Goblins if things had worked out differently. But what about this originally being a ThunderCats game? Well, have you noticed the main character in the screenshots? If that character’s hair was orange instead of blonde and he was wearing blue instead of green… would he not look a lot like Lion-O?

Beyond the Ice Palace was actually a pretty good action/platforming game and certainly a far better title than ThunderCats: The Lost Eye of Thundera was. The game got good reviews at the time with scores averaging out around the mid 80% area. Just a shame it was so damn short and could be finished in a few minutes. So then, that is one of the previous ThunderCats games explained, but what about the one that was being developed by Paradise Software? Well, even that one was eventually released and like Beyond the Ice Palace, just not as a ThunderCats game.

Bomb Jack II was a sequel to the home port of the arcade classic. Published by Elite Systems and developed by Paradise Software. Just as with Ghosts ‘n Goblins previously, Elite Systems did the home computer ports of the original and decided to make their own sequel. They took the part-developed ThunderCats game from Paradise Software and just tweaked it into a Bomb Jack sequel instead, they didn’t even bother to change some obvious aspects as you will discover soon enough.

Bomb Jack II was a very different game from the original as it changed things up quite a bit. I mean, there are no bombs in BOMB Jack II, instead, they have been replaced with bags of money. In the original game, you could fly to collect the bombs while in this one you can only jump from platform to platform. There were several gameplay changes and it was almost as if this game wasn’t even developed as a Bomb Jack game at all eh?

Because of course it was not developed as a Bomb Jack sequel, this was the second of the two games Elite had in development using the ThunderCats license. Now about those obvious aspects they didn’t bother to change when it changed from ThunderCats to Bomb Jack II. Here are a few minutes of gameplay from the game on the Commodore 64…

Notice anything slightly ThunderCats about any of that? How about the in-game music? That is the ThunderCats theme tune, not a very good rendition I admit, but it is the ThunderCats theme. Or what about ‘Jack’ himself? He looks nothing like Jack from the first game, in fact with his orange hair, blue outfit and if you look very closely at the character’s hand (I know it’s hard with those pixel heavy graphics), you can almost make out he is wearing something like a gauntlet… just like the one Lion-O wore in the TV show perhaps?

So there you go, the history of the ThunderCats games all solved… except there was one more (I’m not talking about the one released on the Nintendo DS in 2012). A ThunderCats game for the NES was planned as you can see from this box art. 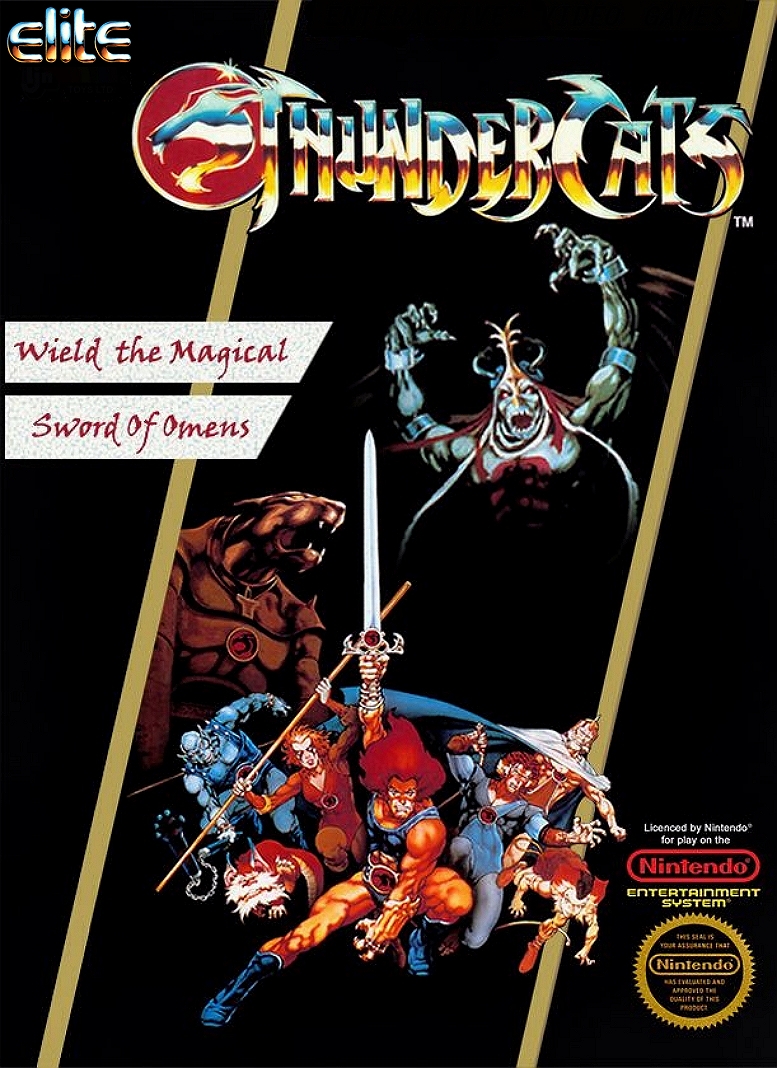 How many times do you think I typed the word ‘ThunderCats‘ in this article?

One thought on “The Curious History Of The ThunderCats Games”