Pre-warning, there will be an overuse of breast slang used in this article for comedic purposes.

Now – I’m not one for click-bait articles, I detest that shit. Luring people in with a catchy, eye seducing headline only to be met with an article that really has nothing to do with what was promised. With me, you get what the headline says – I’m writing an article about boobies in games. There is a point to all of this, I’m not just some sad, pathetic, basement dwelling loner desperate to gaze a polygons in the shape of a lovely pair of jubblies. I mean, I’m in a relationship with one of them real life women things – she got some of them lady bumps…and a wazzo pair they are too, so I have access to actual, real life tatas whenever I like. Wait a second, why am I trying to justify myself to you – you’re the one who clicked on an article about computer generated honkers? 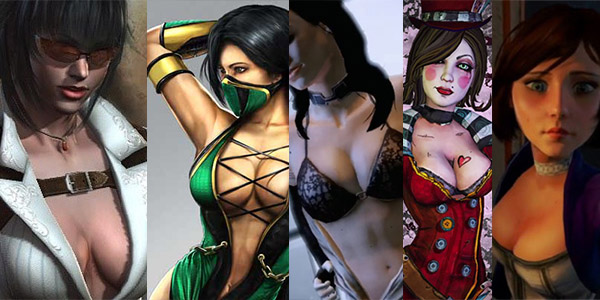 Anyway, the point I want to make will have to wait until the end. First, a brief history of video game gazangas.

I think my first introduction to video game fun bags was back in 1987. There was this game called Game Over released for the popular microcomputers of the day. Graphically, it was nothing to shout about and most definitely didn’t feature any 8-bit Bristols or if it did then you couldn’t really make them out given the lack of fidelity and the limitations of the graphics back then. I mean, the game looked like this…

Phwoah! Hey fellas, look at the pixels on that. Oh no, it wasn’t the actual game where the titillation came from but the artwork for the game. The original game cover and even the initial ads in the gaming press at the time raised more than a few eyebrows back in the day.

Sneaking out from the female’s bra…that’s a nipple right there. Remember this was back in 87 and slapped on the cover of a game that would’ve been on display in a shop…a nipple. Yes there was a slight outrage and the offending starter button was eventually censored – covered up by in-game pictures, company logos and the like. Still even post-censorship, there was still some concern over the areola despite the fact it couldn’t be seen. So another, even more censored version of the artwork was released which replaced the female’s skimpy bra/corset with a much more modest version. 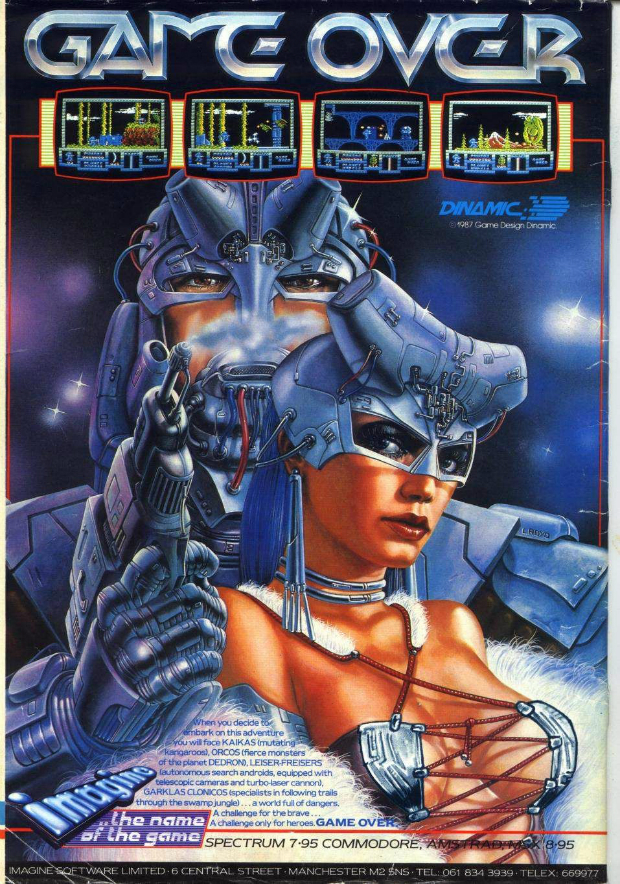 While Game Over is the one that sticks in my mind for that era, it was still only the artwork and not the game itself that featured digital jiggers. There was another game before it that was a tad more risque – 1986’s  Samantha Fox Strip Poker. For those not in the know, Sam Fox was a topless model doing the rounds in the 80s and she was huge…in more ways than one. Her ample bosom made her a big star and getting her baps out in the newspaper was only the start as she also had a music career…if you could call the stuff she churned out “music”. So of course the fact Sam was so utterly popular meant she had to also have her own game and the kind of game a glamour model would be in was hardly going to be a kid friendly platformer was it? So strip poker it is then that featured actual (badly digitized graphics) nudity if you could beat Sam at cards. 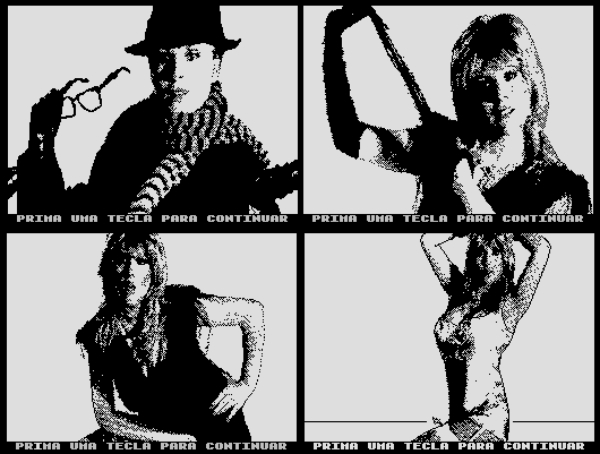 We were first introduced to Lara Croft with her incredibly pointy and large love apples back in 1996 with the release of the first Tomb Raider game. A franchise that has endured to this day with the all new Shadow of the Tomb Raider set to be released in September this year. As the graphical capabilities of the gaming machines have evolved since 96, so has Lara (and her marshmallows) along with them. Lara became a sexual and cultural icon through the 90s and you would often find her on the cover of the lads mags, in TV ads, on posters and so much more. She may not have been the first, but she was most definitely the biggest female gaming character. As the years have rolled by, her sexuality has been dialed back and her bawagos has grown smaller (and much less pointy) in an attempt to make her less of a sex icon and more of a genuine character. 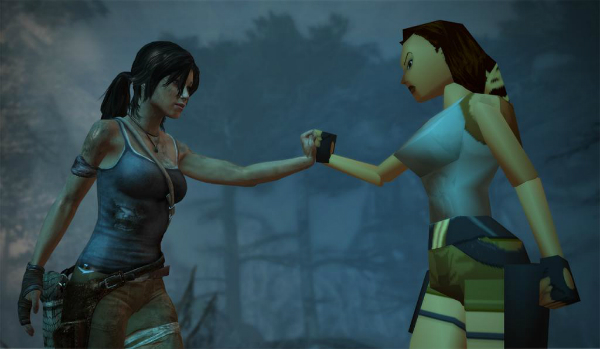 There have been plenty of gaming sex bombs with big, bountiful bubatoes over the years, but there is one gaming genre in particular where you’ll find the biggest selection of gaming gedoinkers and that would be in the fighting genre. I think you can go back to the original release of Street Fighter II: The World Warrior when we were first introduced to thunder thighs herself, Chun-Li. Her impressive thighs were only matched by her bust size that was shown off by the animators/artists of the game at every opportunity. Her breathing animation showed her heaving airbags as for her jumping celebration when she won a fight! Have you seen what she looks like in Street Fighter V? 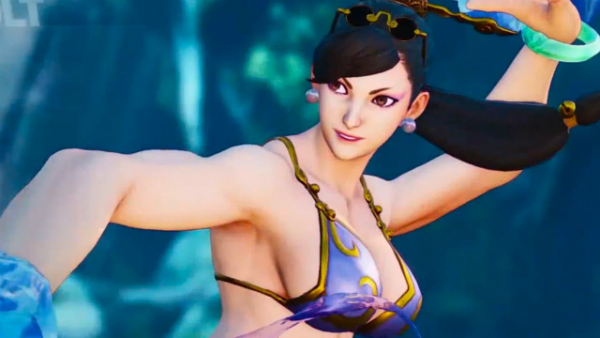 Pick up any fighting game from 1991 onward and I bet the female characters all sport impressive racks and highly sexualised costumes. I’m not saying this is a bad thing at all – in fact this segues nicely into the point I said I wanted to make at the very start of this article. So if I were to say to any gamer to name a fighting game with breasts, there should be one franchise in particular that springs instantly to mind…

The Dead or Alive series of games are the undisputed king of video game towel racks. The women in these games have some of the most absurdly amazing mammaries you’ll ever see and its not just the size but the addition of what is lovingly known as “jiggle physics”. Yeah the rolling hills featured in the Dead or Alive franchise are not only plentiful but they have some of the most eye watering movement you’ll see outside of a porn film. The wobbling wabs have become so infamous that they are now considered part of the DNA of the entire franchise. If you seriously need proof of just how overtly sexualised the females are in this series of games, then you just need to check out the Dead or Alive Xtreme spin-offs. 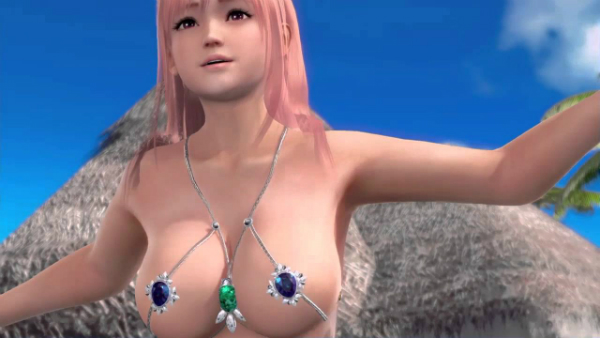 Anyway, the point I’ve been trying to make comes from the fact that the latest game in the franchise, Dead or Alive 6 is said to be toning down the female sexualisation compared to previous games in the series. Gone are the skimpy and sexy costumes to be replaced with more realistic and practical ensembles. The fan favorite jiggly jugs are also set to be stripped back. The dialing back of the more sexual elements are being replaced with more realistic violence. The fighters will now sweat as they punch and kick each other in the face, bruises and other markings will begin to appear, and there will be the inclusion of realistic blood effects.

So what is my point? Well now I’m writing this, two points have entered my mind. The first is why is sexualisation considered such a taboo but violence is given a free pass? Wobbly watermelons is a big no – but blood and breaking bones gets a big thumbs up. I guess in the context of the type of game Dead or Alive 6 will be, it being a fighting game and all, that yes violence is more acceptable. But its not just the Dead or Alive series that thinks sex is bad but violence is good. If you do a quick interwebs search, you’ll find plenty of stories about sex vs violence in video games and how death, murder, etc pretty much raise no eyebrows yet show a little flesh and all hell breaks loose.

My second point only just popped into my head as I was writing. Note how its the female sexualisation that is being toned down…what about the males? You’ve seen these fighting games, yeah the women tend to wear little and revealing clothing – but have you seen the guys? Quite often depicted with their guns on full display and pectorals bigger then Kanye West’s ego. Plus they are also often shown to be topless…but that’s okay is it?

I suppose one could argue that its mainly men that would be playing Dead or Alive 6 so it stands to reason that the female sexuality would be toned down over the males due to the player base…I guess no gay males play it then? But here’s an interesting tit-bit – the player base for the Dead or Alive franchise is surprisingly mainly female. There is even a pro-player scene that is dominated by female players. Yes, the overly female sexualised Dead or Alive franchise has more female fans than male.

From a personal perspective, I couldn’t care less what they do to the Dead or Alive series. Give the ladies bigger and bouncier meat puppets or don’t. I don’t care as I’m not much of a fan of the fighting genre of games. For me, this genre peaked with Street Fighter II: The World Warrior back in 91 and I never did get into the Dead or Alive franchise at all…I am the wrong sex remember. But the whole idea of violence being fine but sex/nudity not so much in gaming or the fact its seemingly okay to sexualise male characters, but doing the same to female characters is seen as “sleazy” is itself very questionable indeed.

1 thought on “My Article About Boobies In Games”