Born Burton Leon Reynolds Jr. on the 11th of February, 1936 in Lansing, Michigan. In 1946 his family moved to Riviera Beach, Florida where Reynolds attended Palm Beach High School and he quickly made a name for himself as an American football player. Looking to peruse a career in the sport, Reynolds received multiple scholarship offers and after graduating from high school he attended Florida State University on a football scholarship. He suffered a knee injury in his first game of his sophomore season so had to sit out the rest of the season. The same year, he was involved in a car accident and lost his spleen and severely injured his other knee as a result, which brought a swift end to his professional American football dreams. 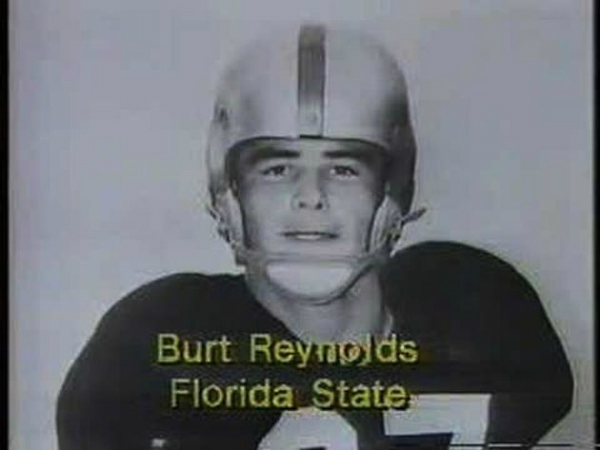 Later, he attended Palm Beach Junior College and studied English under Professor Watson B. Duncan III. It was Duncan who suggested that Reynolds try a bit of acting and cast him in a play he was producing, Outward Bound. Reynolds won the 1956 Florida State Drama Award for his performance and got bit by the acting bug. Burt Reynolds made his Broadway debut in the play Look, We’ve Come Through and received many positive reviews for his performance too. He went on to act in several more plays. It was the late 50s when Burt decided to move to Hollywood and try for a movie career but found it hard to land any roles. So he took jobs working in restaurants waiting tables and washing dishes to make ends meet. 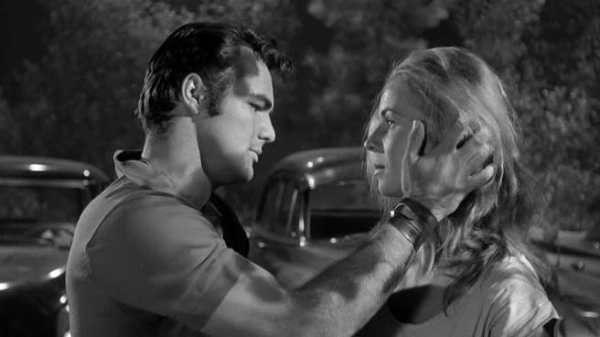 Reynolds eventually landed some very small TV show roles before making his film debut in 1961’s Angel Baby. More TV roles followed including parts in Riverboat and Gunsmoke, his TV jobs led to starring roles in low budget flicks like Navajo Joe, Impasse and Shark! through the 60s. In the late 60s, Burt was even offered a huge role from legendary film producer Albert R. Broccoli in when he was offered the James Bond role after Sean Connery announced his retirement from the prestigious part, a role that would have shot him to super-stardom. Obviously Burt never took the Bond role stating…

It was in 1972 when Reynolds would make his big breakthrough in the movie Deliverance. Based on the novel of the same name, Deliverance is a tense and taught thriller that earned three Academy Award nominations. Full of brilliant and memorable scenes such as the awesome Dueling Banjos and the controversial “squeal like a pig” moments. The film tells the story of four city men out on a canoe trip down a river. Lewis Medlock (Burt Reynolds) and Ed Gentry (Jon Voight) are the experienced ones of the four who are more than conformable with the outdoor life. While Bobby Trippe (Ned Beatty) and Drew Ballinger (Ronny Cox) are virgins to wilderness. The quartet cross paths with some locals and rub them up the wrong way. The guys head to the area where they aim to start their canoe trip and that’s when things begin to unravel. 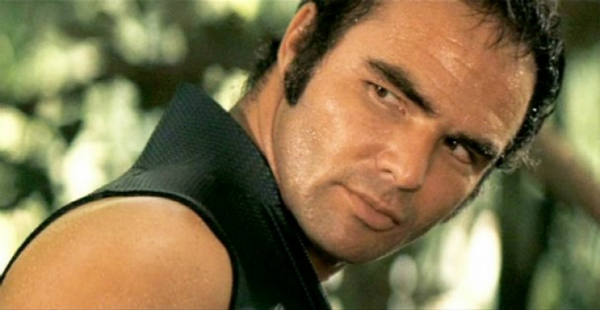 Deliverance is an amazing flick and Reynolds really comes across as a leading man in it too. Burt even went on later to say that he felt Deliverance was the best film he ever did. Despite the serious tone of Deliverance, through the 70s Reynolds became mostly known for his comedic roles. Films such as 1973’s White Lightning and Lucky Lady from 75 and of course the picture that would cement him as a true Hollywood star and comedic actor, Smokey and the Bandit.

As I said earlier, I’m actually writing a dedicated Smokey and the Bandit article where I will go into the film(s) in more detail. So just a light glossing over here but Smokey and the Bandit is one of the all time great and classic flicks. A fast paced car chase movie full of action, comedy and some light racism…it was a different time in the 70s. The film was written and directed by Hal Needham. Reynolds and Needham would become close friends and the two would form a great partnership collaborating several times from this point onward. In short, I fucking love Smokey and the Bandit and it was the film that made me a Burt Reynolds fan. 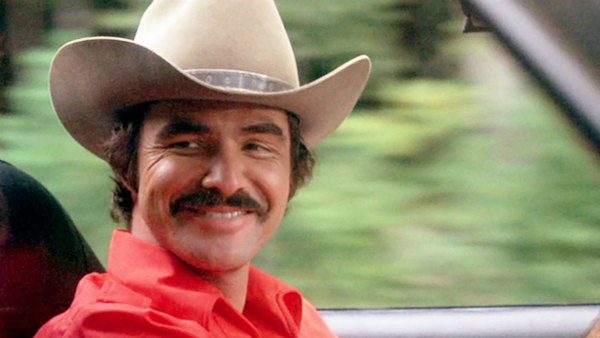 Reynolds also made his directorial debut in 1976 with Gator – the sequel to his earlier film, White Lightning. More films with Hal Needham followed though the late 70s and 80s including Hooper where Reynolds plays “The Greatest Stuntman Alive” Sonny Hooper. Smokey and the Bandit II followed in 1980. With The Cannonball Run from 1981 being another Needham/Reynolds classic team up.

The Cannonball Run is about a group of car enthusiasts who take part in a cross country race. JJ McClure (Burt Reynolds) teams up with Victor Prinzi (Dom DeLuise) and his alter-ego Captain Chaos to take on some of the biggest names in entertainment to win the big race. This film really is star-studded, Roger Moore, Farrah Fawcett, Dean Martin, Sammy Davis Jr. all feature in this one, oh and Jackie Chan in one of his first American film roles too. The sequel Cannonball Run II came out in 1984 and its just as high octane and madcap as the first film. 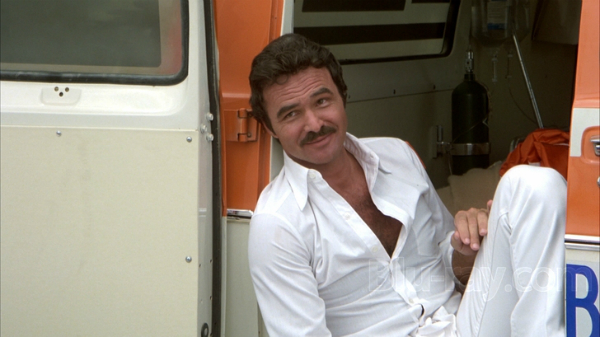 Reynolds career remained fairly steady though the 80s as he appeared in multiple films trough the decade. But his star power started to wane though the 90s and his film roles became smaller or he just starred in some pretty bad flicks. It got to a point when in 1996, Burt had to declare bankruptcy. Partly due to his over extravagant lifestyle and partly due to his divorce from then wife Loni Anderson. Then in 1997, he made an amazing comeback and burst back onto the big screen with the Paul Thomas Anderson directed Boogie Nights. A film that was inspired by the story of real life porn star John Holmes.

After Boogie Nights, Reynolds had a career boost, He’d never reach the highs of that late 70s and 80s era again, but he was getting more and more work as the 2000s approached. He not only got roles in movies and TV, but video games too when he played Avery Carrington in Grand Theft Auto: Vice City and with Saints Row: The Third where he played himself. Burt also played a small role in The Longest Yard from 2005, which was a remake of his 1974 film of the same name. He maintained a steady career though the 2000s and even landed a role in Quentin Tarantino’s latest film, Once Upon a Time in Hollywood…but sadly that’s a role he never got to play. 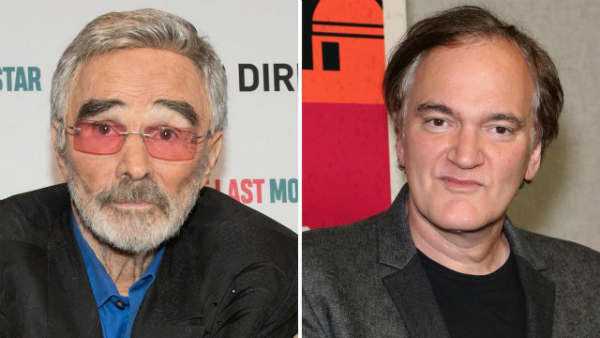 Burt Reynolds died in the 6th September, 2018 of cardiac arrest after suffering from heart problems in recent years.

Burt was good looking, charming, talented and had a laugh that will remain in my head forever. I’m going to miss that moustache sporting, cowboy hat wearing sun of a gun. A true legend and one that will leave a huge gap in the world of movies. 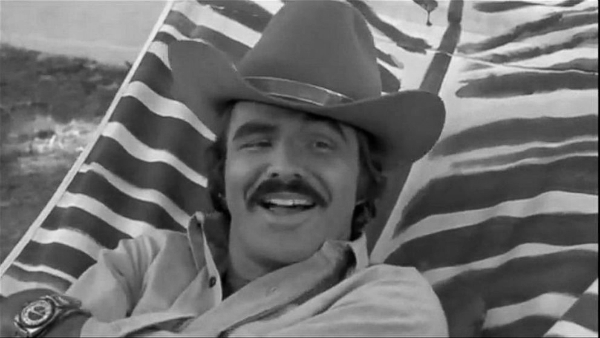 Marriage is about the most expensive way for the average man to get laundry done.