One of my favourite games growing up was the Sega classic OutRun, that game is guilty of spawning my love for arcade racers – particularly those of that 80s/90s era. Sadly, its a genre that has all but faded away what with the advent of modern gaming. Racers these days are going for that ultra realistic kind of approach as seen in titles like the Forza and Gran Turismo series of games. Simple but fun racers are hard to find these days, those pick up and play racers without all the fine tuning guff. Still for every stone cold classic like OutRun there were several terrible arcade racers like Spirit Of Speed 1937 – Just trust me, it’s fucking terrible.

Enter Brazilian indie developer/publisher Aquiris Game Studio and their attempt at reviving classic arcade racers with Horizon Chase Turbo. But is this an arcade hit or a coin-op flop? Horizon Chase Turbo started out as a free to play game for mobile back in 2015, but it has since grown into a “proper” title and has already been released on the PlayStation 4 and Windows earlier this year with it’s new turbo additions and tweaks but it has only just seen an Xbox One and Nintendo Switch release and I’ve been playing the Xbox version.

First up, there are a good selection of game modes to keep you playing. The only one available at the start is World Tour which is exactly what it sounds like as you tour the world stopping off at places like like America (specifically California), South Africa, Iceland, China and Japan to name a few. There are a total of twelve different locales to race in and each of those locales features multiple races with even more varied places. As a for instance, the first and only place unlocked at the start is California and yet within California you’ll race at San Francisco, Sequoia National Park, Los Angeles and even Death Valley. There are almost 50 cites to race in and over 100 tracks to tear around. As you play you earn points and said points are used to unlock new cars to enjoy and countries to race in. Unlock more of the World Tour and more game options open up. Soon you’ll find yourself taking part in Tournament, Playground and even Endurance game modes all with their own set of challenges and options.

Tournament mode offers you three different difficulties and each difficultly features multiple tournaments to ply your driving skills to as you and nineteen AI opponents fight for the top spot. While Endurance mode sees you racing on either 12, 36 or even all 109 race tracks in the game one after another. Which will take a good few hours to get through I’m sure. 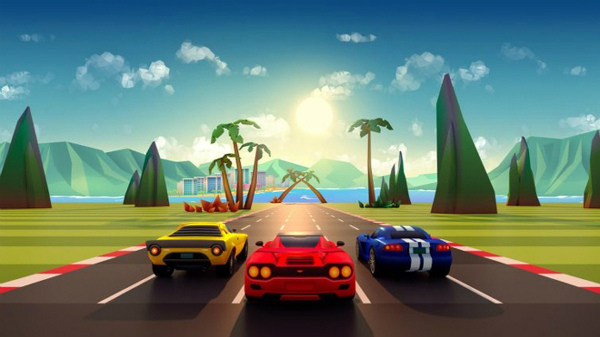 The Playground mode is an all new feature added to the Xbox and Switch versions with the PlayStation 4 and Windows version getting an update soon. I could sit here and try to explain Playground mode but I did get some info on the new mode from Aquiris Game Studio themselves:

Playground is a rotative competition that present 5 new races each time. They are time-limited tracks that will always bring something special to the table: Time Attack races with no opponents, changes in weather and time of day, mirrored races, infinite nitros, restrictions on which cars competitors can use.

Expect to see sandstorms in Iceland, volcanoes in California and new rules! You never know what the next season will feature.

Races come in one of 5 difficulty levels, meaning there’s something for every type of Horizon Chase player. Each race presents two levels of challenge for Playgrounders to take on: beating the computer opponents may be a challenge in itself, but you can always take it up a notch and fight to climb the leaderboards. Each race has its own leaderboard, Global and Friends-only, that stay online only for the duration of a season.

In Playground mode, each season brings a new set of surprises and a new place to compete.

Playground mode is immense fun as it throws you into a variety of races each with their own unique challenges and levels of difficultly. You might find yourself doing something as simple as racing a track in mirror mode or maybe you’ll be in a thunder storm at night with unlimited nitros and no HUD. With races that vary from racing on your own or against a dozen or so opponents. Plus the races will change regularly too so there’s always something new to experience and be challenged by. Playground mode is pretty damn amazing.

Horizon Chase Turbo is not a licensed game so you won’t be seeing any Ferraris, Lamborghinis, Porches and the like – but you will find some very, very close imitations. The first two cars you have in the game are basically a Ferrari F355 and a Dodge Viper.  And it’s not all about supercars either as you’ll be driving this game’s version of a classic Mini, VW Beetle and camper van plus other everyday vehicles. The cars also come in numerous colours and you can unlock special races that will then unlock upgrades for the vehicles too. There are around 30 cars to unlock and drive and you know what, no pay to play, no lootcrates, no DLCs. You can unlock everything, all game modes, all cars, all races and all upgrades just by playing… you know, like we used to be able to do. Plus you can play four player split screen with friends… yes a local/couch multiplayer game – remember those? Horizon Chase Turbo Online also includes online leaderboards so you can compare your race times with players around the globe and even ghost cars so you can race against not only your friends but yourself and try to beat your personal best lap times. 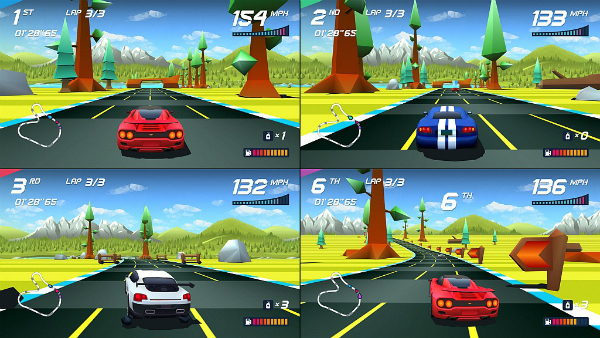 Races are fast paced and enjoyable. I don’t think I’ve taken part in a race that has lasted longer then five minutes yet – and I love it. Speaking if the races, each one has tokens you can collect as you speed along. Collect all the tokens and finish first to get a Super Trophy. worth more points to unlock more goodies, so it gives you something to aim for even if you’ve already completed a race. There is also a fuel gauge so you’ll need to pick up fuel icons as you race. Horizon Chase Turbo offers a firm but fair challenge. I found myself blistering my way through the first three or so countries and races, but the AI gets tougher and the tracks begin to become more twisty and feature narrow roads which begin to push your driving skills.

Your driver comes up with quips and jibes as you overtake or crash, delivered via a speech bubble which is something taken directly from the Top Gear games on the SNES. But Aquiris have added a nice little spin on the idea as depending on which car you are driving, your driver will say different things, if you drive the Explorer car (this game’s version of the DeLorean DMC-12) the driver will quote Back to the Future with lines like “Great Scott” and “This is heavy”. In fact there are a few movie based cars to unlock each with their own references.

The graphics really are quite something. They’re retro yet modern in glorious HD. They have that cartoon-like, cell-shaded look. Low polygon count but high in colour and vibrancy. The cars and scenery lack any real detail, but that’s the appeal. The lack of detail means the game moves along as a very speedy pace, this game is fast. Each country/city is represented by a scrolling backdrop that highlights famous landmarks such as The Golden Gate Bridge, Moai stone heads from Easter Island or even the Acropolis.

Horizon Chase Turbo is simplistic and I don’t mean that in a derogatory way – in this case, simple is great. The controls are bare minimum, accelerate, brake, a button for nitro and then just turn… oh and you can blare your horn at opponents. No gear changing, there’s no tweaking your set-up, worrying about down-force, selecting the right tyres, etc. This is simple, basic racing. Select your car, its colour and hit the track taking corners at 140+ MPH as the colorful scenery blasts past you.

Initially, I was disappointed as the game isn’t very OutRun at all. But the more I played it, the more it dawned on me that I don’t think it intended to be OutRun. You remember that Louts Turbo series of games on the Amiga? They were published by Gremlin Graphics and went on to evolve into the Top Gear franchise on the SNES. Well Horizon Chase Turbo very much puts me in mind of those games. The graphics are of a similar style, the cars drive the same way, the sense of speed is the same and even the music is similar (well it was all composed by the same man, Barry Leitch). Horizon Chase Turbo is an imitation of some of the best 90s racers and a damn good one at that. It’s quite clear the guys and gals over at Aquiris Game Studios knew what kind of game they wanted to make with @Horizon_Chase, it’s obvious they have a passion and drive for those 90s arcade racers.

I first put the game on aiming to play for an hour and thinking I’d get bored. Four hours later and I was still playing while writing this article at the same time, I only turned the game off because it was after 3 AM and my eyes were getting heavier and heavier. I just couldn’t stop playing, I’d unlocked the third locale, Brazil and wanted to see more – but fatigue eventually got the better of me. Let me put it this way, this game has made me stop playing Red Dead Redemption II… for a while at least.

I have since played the game a lot more and still thoroughly enjoying it. As I write this article, I’m a little over 50% way through the World Tour mode and I’ve dabbled a little in some of the other game modes too with Playground being the most fun, I can’t wait to see what crazy rules and races they have lined up next. I’ve still got a lot to unlock and enjoy. This is well stocked game with lots to unlock, new cars, tracks and even game modes. Horizon Chase Turbo is more than a game, it’s a time machine that has taken me back to that early 90s era when me and my brothers would play Lotus Esprit Turbo Challenge on the Amiga 500 till all hours in the morning.

Horizon Chase Turbo is pure and simple arcade racing fun that I hope Aquiris Game Studio will refine and add new features too. May I suggest a track editor, overlapping tracks that use tunnels/bridges at the cross-point, jumps, race creator where you can set up your own rules Playground-style… this could be an almost limitless racing game.