Okay so a few weeks ago I announced how I’m cutting back on this blog to concentrate on writing my books and I have been doing just that too (honest). But I have a little spare time and the kind folk over at Amazon Game Studios sent me a review code for The Grand Tour Game (thanks Will), so I thought I’d have a short sabbatical from my books and take a look at the game.

The Grand Tour is an Amazon Video show fronted by Jeremy Clarkson, Richard Hammond, and James May that is basically Top Gear after the BBC fucked up Top Gear. The game is a melding of the T.V. show and gaming to create an interactive T.V. show I guess where you get to “play” episodes from the show itself –  you can even watch episodes of the show from within the game too if you like, via Amazon Prime Video.

So I think the best way to explain this is to just go back to the very start. So the very first episode of the show has a very, very, very long intro that (comically) shows Clarkson leave his old job and teaming up with Hammond and May to begin their new jobs hosting The Grand Tour. That’s exactly how the game starts too, with the exact same video intro. The video then blends seamlessly into the first race of the game with you playing as Clarkson racing against both Hammond and May on their way to The Grand Tour stage to host the first show. That’s how the game works, you watch the episode and then when the car action kicks in, you take control. 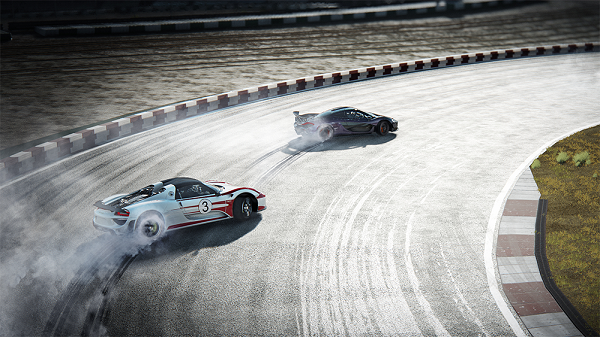 It’s all done very well indeed and the blending of the show itself with the game is wonderful. You do feel as if you are playing the T.V. show. The racing itself is very arcade-like. This isn’t trying to be a Forza or Gran Turismo style hyper realistic racing sim, this is stupid, silly, over the top arcade racing… and it’s great fun. The races are varied from simple one on ones, drifting challenges, time trials, drag races and there are even races with power-ups you can use to trip up your opponents. There are a good mix of races, challenges and cars to play around with and each piece of action always feels very different from the last. You’ll be tearing around The Grand Tour race track going for a fast time in a supercar and later find yourself doing donuts in an abandoned theatre in Detroit using muscle cars in an attempt to create as much noise as possible. 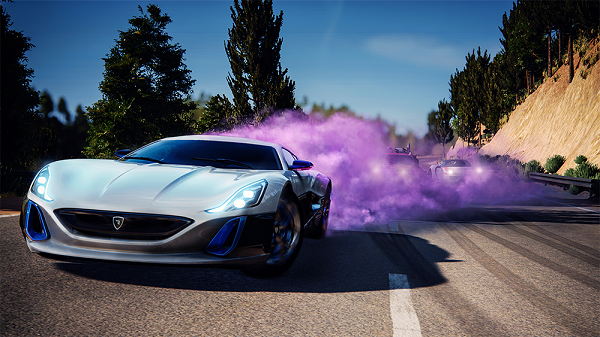 There’s a lot of content here even though it’s not complete. See, as the game is very closely based on the T.V. show that means you get entire episodes the play round in. However, its not complete because there is only one episode in season one, one episode in season two and one episode in season three. So only three episodes in total to play with right now. But don’t let that deter you as each episode has loads and loads of racing in them with multiple scenes to enjoy in each episode. And the game is continually being updated with more and more episodes. Seeing as season three has just launched, Amazon Game Studios will be concentrating on that season for now and with each newly aired episode of the show, you’ll get a new episode to play in the game. There will be updates for the first two seasons too at a later date to eventually include each and every episode from every season in the show. But right now, season three is the main focus for the production team so that’s where the priority lies with the game. Honestly, that’s a lot of game right there as is even though it’s not finished yet.

Then outside of the singleplayer mode where you play the episodes from the show, there is also a local multiplayer mode… and it’s four player too. So you and three friends can get the beers in and throw insults at each other sitting on the couch while racing. I love it when games do this as split-screen multiplayer is dying out fast and I miss those days. But there is no online multiplayer which I thought was a bit odd. Yeah I love the old split-screen action, but sometimes you and your friends can’t all be together at the same time and online is the only option. 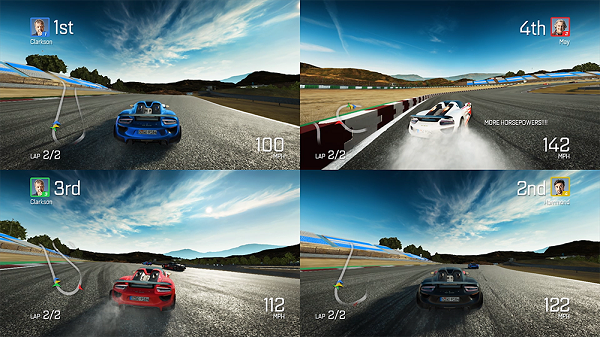 So it’s all good right? Well not exactly. The game is fun, it’s great fun but there are niggles. The cars feel a bit to heavy for me – especially from an arcade racer like this, maybe I just need to get used to the handling a bit. I’ve not played a racing game for a while (with the exception of Horizon Chase Turbo) so my racing game skills are a little stale to be honest – but the handling just felt sluggish. I think it would benefit from some control options, sensitivity and the like so you can tailor the controls to your needs. You can’t change camera and are stuck in 3rd person view. I hope they add different camera views in a future update as for this type of game, I personally prefer a in car view. Plus you’re also stuck with automatic gears, which I think will deter some racing fans. These are niggles that can be fixed and tweaked and I hope that @AMZNGameStudios will add new features, options and updates to improve the gameplay outside of just adding new episodes.

Overall, The Grand Tour Game is good, could be better – but what is there right now is good. It’s full of varied content – with more coming soon with each new episode of the show. It really does feel like you are playing the show and the seamless transitions are beautiful. Plus the game comes loaded with all that irreverent banter between Clarkson, Hammond and May as the trio needle each other though each episode. I can’t wait to see what stupidly ridiculous challenges lie in wait for future episodes. 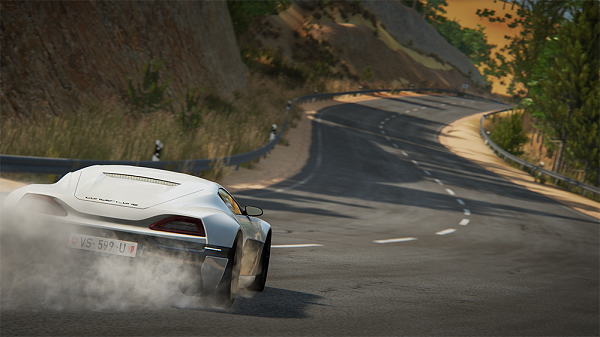 It’s currently for sale at just £12 (or your county’s equivalent) on PlayStation 4 and Xbox One and I say go for it. If your a fan of the show then you can’t go wrong and you’ll have a lot of fun. Go out and buy @PlayTGTGame right now. Well I’ve got to get back to playing The Grand Tour Game… I mean writing my books.