What would happen if you took Zelda, Minecraft, Fable, Animal Crossing and a bit of Harvest Moon, threw them all in a blender and blitzed them up? Well, aside from a load of broken games, you’d probably get a new title very much like Yonder: The Cloud Catcher Chronicles. Developer Prideful Sloth and publisher Merge Games have managed to put together a game that is as inviting as it is pacifist.

Originally released back in 2017, Yonder has more recently seen an update for the latest consoles and I’ve been playing the Series X version, which looks great. Visually, the game really is quite striking in a very cute and cuddly kind of way. Rolling green hills, wildlife grazing, luscious trees, arid desert and more. All with a really quite wonderful looking cartoony aesthetic that works amazingly well. I’m not going to harp on about the visuals, you just need to know that they really are fantastic. On to the basic plot.

So, you play as a young (customisable and nameless) traveller, who finds themself shipwrecked when their ship crashes into the lost island of Gemea. You are asked to meet up with a village elder and get dragged into helping clean up the beautiful land you now find yourself on. A purplish, indistinct aura-like plague called Murk has been taking over parts of the world and you agree to help clean it up… basically. That’s it for the main villain of the game, a purple haze that needs to be cleared. As I mentioned in the intro, Yonder: The Cloud Catcher Chronicles is a very pacifist experience. There is no combat of any kind. The closest thing you get to any kind of violence is smashing barrels and rocks with a hammer. Or cutting down trees and long grass for resources. 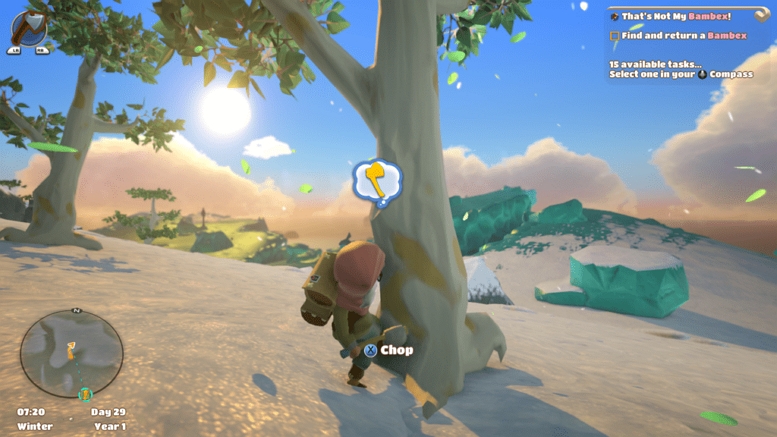 In your journey, you are aided by sprites and the more sprites you find (they are hidden throughout the island), the more of the Murk you can clear. Clearing the Murk opens up new areas of the map and even buildings and other villages. One of the first clouds of Murk that you will have to remove in the game reveals a farm. Here you can build pens for animals, troughs to feed and water them, etc. You begin with an empty plot and can turn it into a working farm for animals and to grow crops. There really is a lot going on here with a farming system, a crafting system, trading and so much more. Then there are various guilds that you can learn new skills in too. You’ll soon be learning all sorts of new talents in construction, cooking, brewing and more.

There are also plenty of quests to keep you going and getting you to explore new areas of the map. Pretty much everyone you meet in the game will offer you a quest or seven. Sadly, most of the time, these quests are nothing more than ‘go here fetch this and bring it back’ kind of a thing. You don’t always have to physically get the item requested as you could always do a bit of trading instead. See, one quest giver could task me with getting a specific type of fish. I could’ve gone to a very specific spot and tried to catch the fish myself, which would be very hit and miss as there’s no guarantee you will definitely catch the specific fish needed. Or I could go to one of the many traders found in and around Gemea and get the fish from them instead. 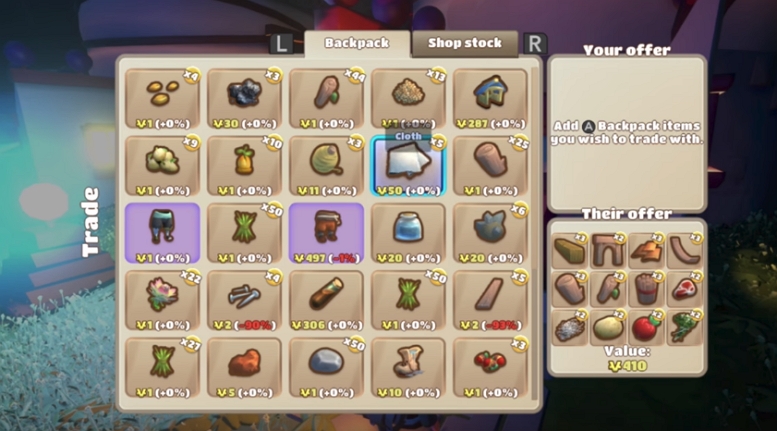 Yet, there is no coin and no currency of any kind in Yonder: The Cloud Catcher Chronicles, so how do you get items from traders with no currency? You just trade. The trader may say that (as an example) the fish you need has a value of 56. It is then up to you if you think the work that goes into gathering various items to total the 56 value of the fish is worth the work. Thankfully, there’s no shortage of resources throughout the island of Gemea and working with traders is actually quite a joy and there’s even a fluctuating value system for each item too.

The entire world of the game is crammed with cute details and features. You’ll find plenty of clothing, jackets, bottoms, backpacks, hats, glasses. Nothing has any effect on your character and everything is purely cosmetic but there’s so much to find and playing dress-up is quite fun. There are different hairstyles and you can dye your hair various colours too. There isn’t only a day/night cycle but an actual year. A year with seasons too, it’ll snow in winter, be gloriously sunny in summer and so on. Even more so, there are fun events tied to the time of year. As an example, It was late autumn and I was told it was Halloween. I was given the option to get dressed up and do a bit of trick or treating… so I did. Yonder: The Cloud Catcher Chronicles is just filled with wonderful little touches that may only be cosmetic, but you really do appreciate them being there. Plus, there’s quite a few cheeky Easter eggs to discover as you explore the island. 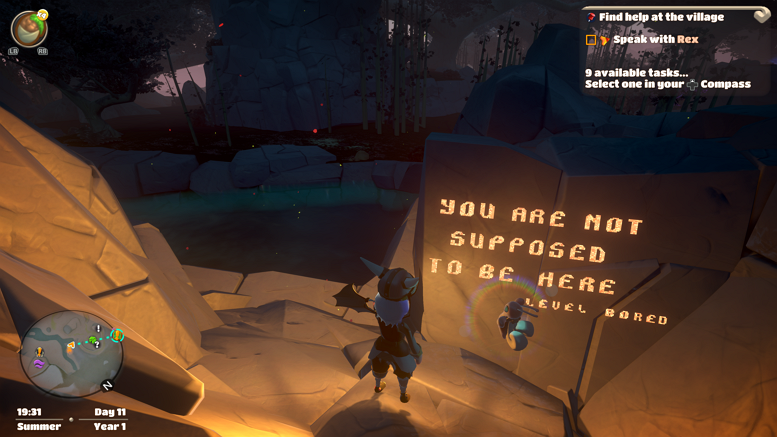 Just talking from a purely personal perspective. I honestly found Yonder a bit too ‘simplistic’, too hand-holdy. Yet, I also have to be honest and say I still found it to be an utterly charming and enjoyable experience nonetheless. It may be just a bit too ‘easy’ for more experienced gamers, for those used to a harder edge to their crafting and action-adventure games. But I do think that if you are new to the genre or perhaps a younger gamer looking to find an entry-level title into the crafting/adventure game sub-genre, then you really can’t go wrong with Yonder: The Cloud Catcher Chronicles.

It is definitely a game that will keep you entertained, even if it doesn’t really do anything inspirational or new. The quests in the game are as generic as you can get. Yet, there is certainly something to be said for the beautiful looking world you are in and the endearing characters you will meet in the game that supply some pretty funny humour along the way. Plus, I really do have to admire a developer that removes something as bog-standard as combat from their action-adventure game. It is a bold move and one that can destroy a title like this, yet with Yonder, it just works.

This is a totally relaxing game set in a wonderfully serene world. With zero levelling up, zero combat, zero threat. There’s no health bar to worry about, no game over screen, but Yonder: The Cloud Catcher Chronicles is crammed full of charm and plenty of personality. 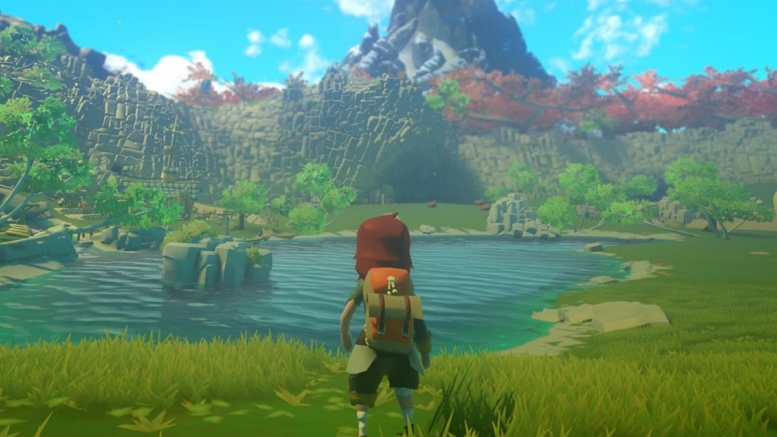 Which all brings to the final question that I always ask myself in my reviews, do I recommend Yonder? Currently being sold for around £25/$30 which is an average price for an indie game of this nature. I most definitely do recommend Yonder… but with a slight warning. As I already mentioned, I personally found this a bit too easy and hand-holdy. With no combat and no threat, no possible game overs, there is a certain ‘placid’ feeling to the game. Now, I don’t say that as a negative about the game at all. As easy and hand-holdy as it is, I still adore Yonder: The Cloud Catcher Chronicles, I’m just trying to make it clear what type of game this is. It’s not an all action-adventure title, it’s a serene, calming and very passive experience. It’s nice to have a game like this, a much more relaxing gameplay style and one that is truly endearing too.