I’m a gamer with a wide and eclectic taste in gaming genres. I like simulations that require your full attention. I like story-driven titles that demand that you keep up with the plot. I like puzzle games that test the old noodle and more. But sometimes, you’re just in the mood to shoot the crap out of anything that moves. From developer Pixelsplit and publisher Assemble Entertainment comes such a game. This is Deadly Days.

Okay, so this isn’t quite just shoot anything that moves… though you most definitely do that. There’s actually quite a decent amount of strategy and thought going on in Deadly Days too. But before I get to all of that, a (very) quick synopsis of the plot.

So, a fast-food franchise called MKing have introduced a new burger. This burger has a top-secret ingredient that is super addictive and keeps the customers coming back for more. Oh yeah, it also turns people into zombies that just want more and more meat, even if it’s human meat. Soon, most of the world becomes infected and you find yourself in a zombie apocalypse. There’s only one thing to do… survive and kill countless zombies. Okay, two things to do. Oh and destroy the burger restaurants to try and stop the zombies. Three things then. 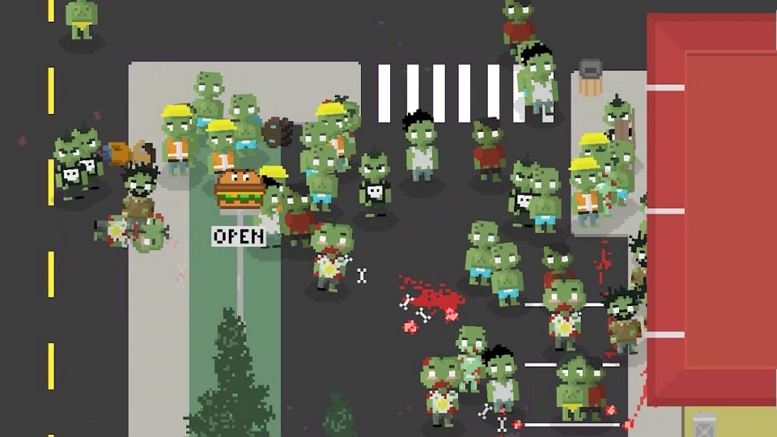 You control a small team of survivors and you have one in-game day to leave the safety of your camp to go and scavenge what you can to stay alive. Aside from shooting endless zombies, and they are endless. You’ll have to search buildings, etc to find anything to keep yourself alive. Your main source of income is scrap. You use this scrap to repair and upgrade weapons and skills… of which there are loads. You’ll also need to keep a steady supply of apples too as these are your food that will keep you from dying of starvation. As an example, let’s say you have four survivors in your team but only two apples in your camp, then two of your survivors will die at the end of the in-game day. 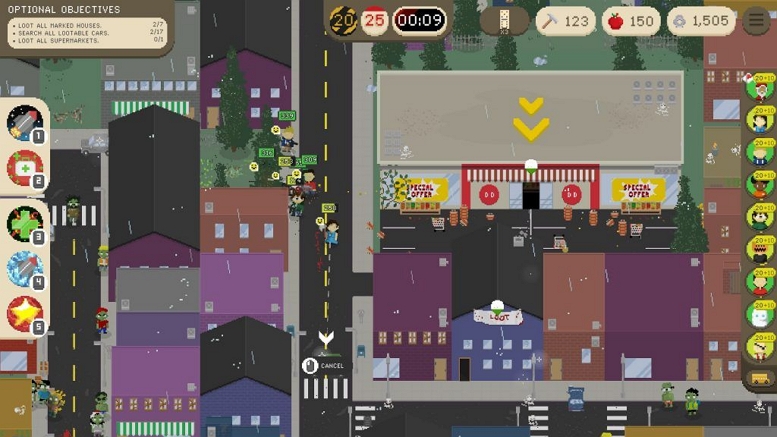 At the start of each day, you get to select from three randomly generated missions. These vary from basic scavenge ones, to rescuing a survivor to join your team, specific building raids (warehouse, hospital, supermarket) and even missions to destroy one of the burger restaurants turning people into zombies. When/if you do manage to take out one of the burger places, you’ll be given a piece of a map. Get all four pieces of the map and locate the source of the infected burgers and destroy it to win.

Then, each of the missions have their own statistics that you’ll need to keep an eye on too. Map size, how much loot and difficulty are all displayed before you pick a mission. Then, missions can also feature random events that you will have to contend with. There may be a special zombie on the map that will drop some impressive rewards if you manage to kill it, maybe they’ll be an abandoned bus with extra loot? Maps can hold either nice and rather unpleasant bonuses, there may be a map with an abundance of apple trees for you to gain some much-needed food, or the map could be overrun with rats that will continually attack you. There really is a lot to think about when you do pick your mission at the start of each day. I mean, let’s say you are running low on apples. It might be a good idea to go for a high loot map or one with a supermarket to raid, as this will increase the chances of scoring more apples. This is where some of that strategy I previously mentioned comes into play. You really have to plan and think about your next move like a chess player, think if the risk is worth the possible gain. Even though the core of the game is shooting hundreds of zombies, there’s still a decent level of strategy here. 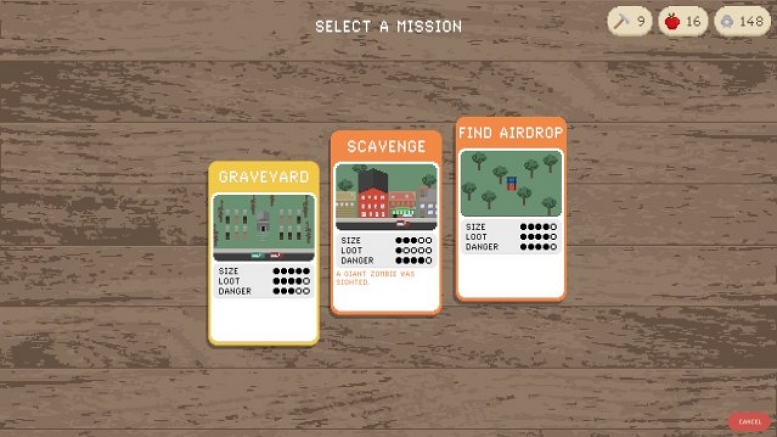 When on a mission, you only get 1:30 of real-time before night comes. The time limit is tight and you may have to pick and choose what to loot as the bigger the building, the longer it takes to search it, which will eat up your very limited time. But going for bigger buildings will get you more and better loot. Plus, there’s the fact that most of the maps (unless you get one with a bonus) are shrouded in that classic gaming trope a fog of war, so you also need to uncover the map as you go. It really becomes a balancing act of you between trying to grab the loot you need to stay alive and trying to get out alive. See, when the day ends and night falls, the zombie presence increases and they get stronger. The longer you stay out at night, the more numerous and stronger the zombies become. You’ll soon be overwhelmed, so you really don’t want to spend too much time on the maps at night if you can help it.

To escape each map, you need to get back to the bus that you arrived in. Even something as simple as that is not that simple. When you first arrive on a map, your bus needs to ‘cool down’ before it can be used again, then you have to start the engine and that takes several seconds too. So even just getting back on the bus to escape eats into your very limited time. How the game actually plays when on the map and killing zombies is very much like the previously mentioned Cannon Fodder. Move your small team around the map, shoot zombies, buildings and scenery, etc. The controls are simple and basic. Your team will actually auto-attack, though you can also directly control that yourself with the touch of a button. Press a button to loot a building, other buttons use the various skills. Very simple, very basic but very effective and the controls really do work well. 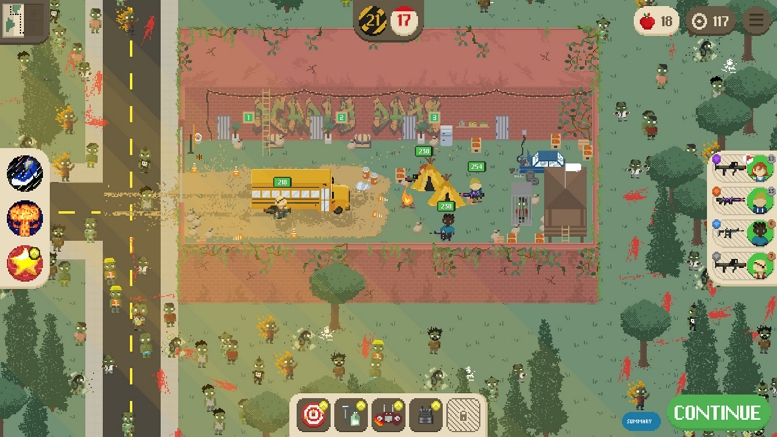 When back at your camp (if you survived), there are numerous things to mess around with. Any new weapons you found will need to be repaired with the scrap that you (hopefully) salvaged. Then, any unwanted weapons can be turned into spare scrap too. You also have different skills that can be upgraded and at the start of every new game, you get to choose from one of three (and one locked) skill sets. The more you play and survive, the more you’ll unlock on each of those skill sets. You can also build various rooms that will add numerous bonuses, upgrades and weapons.

The game is very fast and frantic. I died a lot without even finishing one map at first. But the more I played, the more I got used to the game’s mechanics, everything soon began to fall into place. The balance between trying to loot all you can to survive and trying to get out alive is tight but fair. Visually, Deadly Days has that pixel-art style that is very popular with indie games right now. Though the maps can tend to feel a bit ‘samey’ after a while as most of the action takes place in the same city. Even though the maps are randomly generated, you’ll still see the same assets over and over. There is some slight variation depending on the mission you choose at the start of each day, but not a great deal. 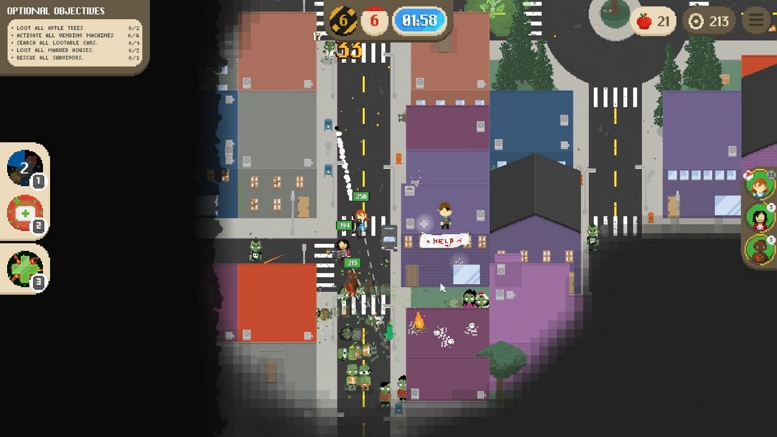 To finish, do I recommend Deadly Days? First, it is price-tag time and this one is currently being sold for around £16/$19 on consoles (slightly cheaper on Steam). For that cost, you do get a lot of game for your money and this is really addictive with that ‘one more go’ feel to it. However, I do need to reiterate how damn difficult Deadly Days is. This is a rogue-lite and they are notoriously tricky-dicky with hundreds of deaths and game over screens before you make any serious progress. Still, I do love a good rogue-lite and I think this is up there with the best of them. There’s loads of gameplay to be had here from trying to survive the maps to the fuck-tonne of weapons, skills, upgrades and base building to experiment with too.

When I first played this, I admit to not really feeling it. As much as I love a good rogue-lite, Deadly Days just was not doing anything for me. Still, after a couple of hours, I was hooked. The game began to make a lot more sense the more I played, the more I mastered the day/night cycle of the main action. The more I experimented with the various skills and dabbled with the upgrades. As I began to unlock more weapons, items and survivors, Deadly Days just clicked. Yes, I recommend this to those who, like me, enjoy a good rogue-lite with a steep learning and difficulty curve. This may be as hard-as-nails, but it’s also immersive and immense fun.