Back in the early nineties, there was a bit of a battle to create an iconic gaming mascot… especially within the platforming genre. Nintendo already had their moustachioed Italian plumber from New York with Mario. Sega had hit the ground running with the Blue-blur that was Sonic. The consoles were well catered for and housed some of the most endearing platform gaming characters ever. However, the home computers of the day were lagging behind in that regard. A few developers tried to introduce a new gaming mascot, there was Team 17 with Superfrog. A couple of years before that though (but slightly after Sonic had been unleashed), Gremlin Interactive introduced their new character, Zool.

Zool: Ninja of the Nth Dimension was an attempt to bring console-style platforming action to the Amiga 1200. In fact, Zool: Ninja of the Nth Dimension was bundled with the then newly released Amiga 1200 computer. The game saw ports to other home computers and even some of the consoles later too. Long story short and twenty-nine years after the game’s original 1992 release, it has been remade. From developer Sumo Digital Academy (a wonderful academy giving young coders the chance to make games) and publisher Secret Mode comes Zool Redimensioned.

But is it any good? Well, that is why I’m writing this review. But before I do get into it, I just want to very quickly cover how I felt about the original game back in 1992. It was a distinctly average platformer game with some really annoying flaws. Of course, we Amiga owners lapped it up back then, because it was the closest thing we could get to playing Sonic the Hedgehog without having to buy a Mega Drive. As a game, Zool just lacked the polish and style that the far superior console platformers were doing at the time. The main selling point of Zool: Ninja of the Nth Dimension was that it was fast, that was why it was often considered the Amiga’s answer to Sonic the Hedgehog. As someone who wasn’t much of a fan of Sega’s then-new mascot and the Sonic game… it was still far better than Zool.

So anyway, how is this remake? It plays pretty much how I remember the original playing almost three decades ago. It still has those bright and colourful graphics. The levels are still based on things like sweets and music. You control Zool with ease, a button to jump, one to attack and one for your special spinning move. This really is basic stuff and I don’t mean that in a negative way. This is all that is really needed from a game like this, it’s not overly complex so it doesn’t need a complex control scheme. If you have ever played any 16-bit (or even 8-bit) platformer, then you already know what you are getting into with Zool Redimensioned. Run around the levels, pick up stuff for points, jump on or shoot enemies, get to the end of the level, kill boss, move onto the next area. Zool Redimensioned doesn’t try to reinvent the wheel, it has just put some nice sparkly additions on the spokes. 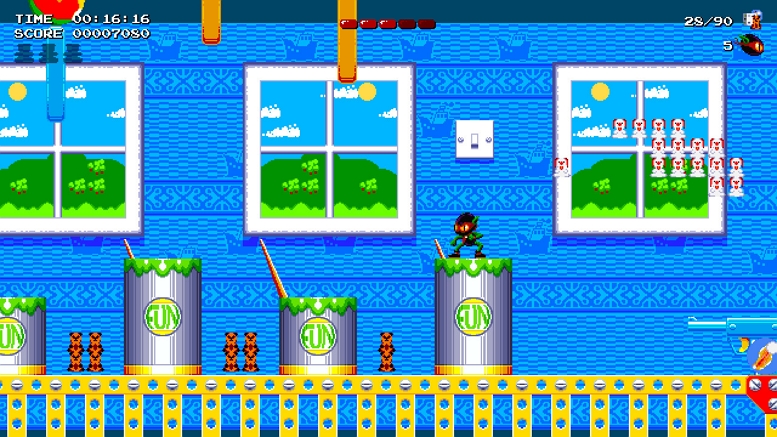 One of the main gripes over the original Amiga version was that the screen always felt too small. Because it was in the 4:3 aspect ratio and Zool was a speedy little character, you would often get caught out by things just off the screen as you couldn’t see more than two inches in front of the character. Thankfully this remake fixes that by having a widescreen format, so you can actually see what is happening on the screen all the time. The graphics are (obviously) nicer too, high def and all that. Yet they still retain that original look. Zool also has a double jump now, very handy for any platforming game. Also, another niggle with the original was that to finish a level, you had to collect all (or most) of the items on each level to progress. This was a massive pain in the arse as it really slowed you down and broke up the momentum, ruining the speed of the game that was supposed to rival Sonic at the time. This remake does away with that and the collectables are just there for score. Go and collect them all if you really want but you don’t have to.

However, Zool Redimensioned does come with two difficulty settings. There is the normal mode, which plays just as I described up there. Or you can opt for Ultimate Ninja mode. Here, you lose the double jump and have to collect everything on the level to progress. It’s a nice little addition as you get the best of both worlds. You can play the better and more enjoyable normal mode, or you can go old school and be taken back to the more annoying, 16-bit, original mode.

There is something to be said about a game with a bright and colourful graphical art style like Zool Redimensioned and that thing is… it all looks a bit too ‘messy’. It can be hard to tell what is an enemy and what’s just background detail. Things blend into other things and nothing is ever truly defined. Spikes in one area look like spikes, so you know to avoid them. But move on to a new area (the toy one springs to mind right now) and the spikes don’t look like spikes at all. So you think you can jump on them, only to be dealt some damage. Some worlds have enemies that look like platforms and platforms that look like enemies… the music-themed one is a right bitch for this. As I say, it’s all a bit ‘messy’ and while that kind of worked back in 1992, it really doesn’t now.

But the main issue with Zool Redimensioned is that the gameplay itself has just has not evolved. Yeah I know, the devs are trying to recapture that 16-bit platforming and they have, perfectly. But as I said earlier in this review, I was never a big fan of the original game. This remake doesn’t move things on at all. There are a few new additions sure, but under all of that, this is still a very ‘meh’ game, just like the original.

For me, I think the best way to sum this one up is that it’s a pretty good remake of a distinctly okay-ish game. The team at Sumo Digital Academy have done the best they could with the material given. The changes and additions to this remake over the original are an improvement… just. The widescreen is far better, the fact you now don’t have to collect everything on a level to advance, etc. It’s all good, great in fact and I doff my cap in respect to everyone at Sumo Digital Academy for their efforts. But… it’s still just Zool: Ninja of the Nth Dimension, which I never much liked back then.

So, is this worth buying? For me on a personal level? No, not at all. There are better and more creative indie platformers out there right now. If I wanted to bring some Amiga classics back, Zool: Ninja of the Nth Dimension would be very low on the list. But if you were a huge fan of the original game(s)? Yes, I recommend it to those people, very much so. This really is a perfect slice of Zool action and I think fans will really enjoy playing this superior version. The additions and tweaks work well and they do make the game more playable than it was back in 1992.