The arcade shooter, a bullet hell game that is harder than a T-rex’s tesicials. They are as infuriating as they are playable. One of the old guard of this genre is Raiden. Originally released way back in 1990, Raiden went on to spawn several sequels and spin-offs. Now in 2021, it is back. Raiden IV from 2007 has been ‘remixed’ and re-released as Raiden IV x Mikado Remix for the Nintendo Switch, developed by MOSS and published by PQube. But is it any good? Well, that is why (fast becoming regular guest reviewer) Dave Corn is here, he’s played the game and now offers his views for your eyes to look at.

In 1990, a Japanese based studio named Seibu Kaihatsu released Raiden. This was a competitor in a newly growing computer game genre, the shoot ’em up or ‘shmup’ for short. The shmup genre grew as the developers behind the games (and technology) grew too. The genre got more complex, faster, tougher and so, the sub-genre of the ‘bullet hell shooter’ was born. This is no more apparent than in the evolution of the Raiden games. 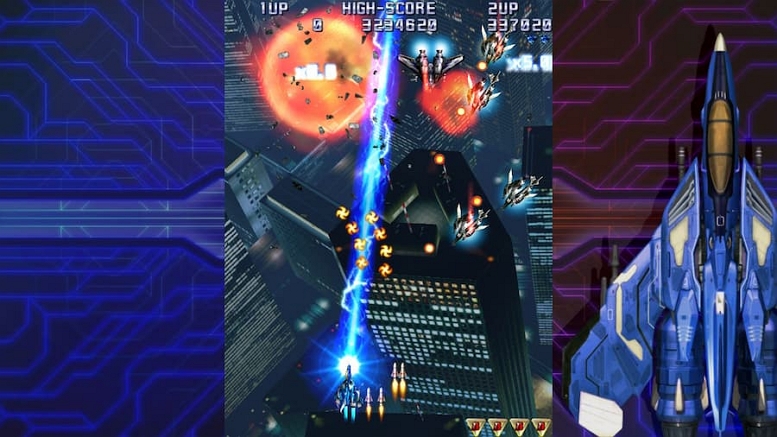 When given Raiden IV Mikado Remix to review, I knew of the series, yet even with my extensive background in retro gaming, it was another series I’d long forgotten about. So I decided to refresh my memory and quickly play through the other games in the franchise before playing this latest Switch release. By the time I did get to this all-new Switch version that I was going to review, I realised that Raiden IV has been released a few times before, originally in 2007 for arcade and then later ported to Xbox 360 and after quite a while, PS3 and PC.

With each new release of Raiden IV over the years, new modes and gameplay options were added. This is where this new version of Raiden IV Mikado Remix comes in, the current Switch version is a compilation of all these modes before. Graphically the game has barely been touched and the visuals haven’t aged well, your ‘ship/sprite’ has an almost 100% hitbox, meaning in a bullet hell shooter like this, when dodging, you have very little room for error. There’s so much going on in this that you lose track of where you are on the screen. This issue is not so bad when you are playing on a nice big TV but as soon as you are playing on your Switch as a handheld, get them painkillers ready because you will give you a headache! I’m not saying that it’s a terrible looking game, far from it but there are games in the same genre from around the same time that look so much better (take Radiant Silvergun for example). 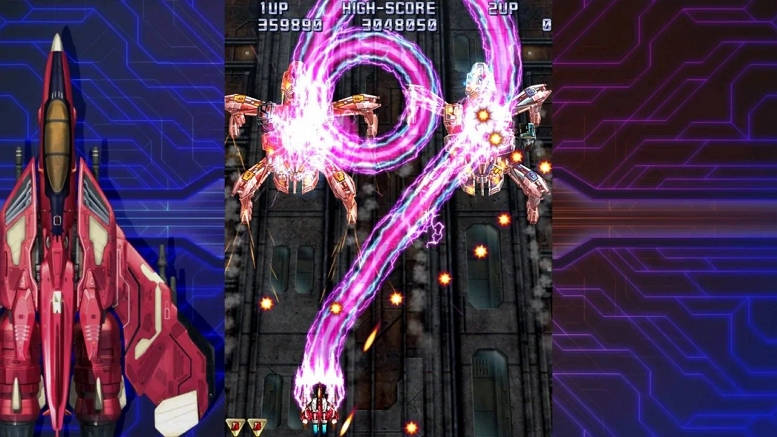 The different modes seem to be there just to add even more frustration to an already very difficult game. The standard arcade mode is already the ‘coin eater’ it was designed to be. Then there are the overkill mode and the fantastically named additional mode (do you think they just couldn’t be bothered by this release?) that make you want to quit gaming and go live with a technologyless group of monks in a mountain somewhere. Having the view locked to the original 16.9 with no option to change to a widescreen or even stretched perspective seems like a bizarre choice and devalues the feeling of the game as a standalone package. The game itself just doesn’t seem enough to warrant its price point (£29.99) for fans of the series to buy it (yet again) and for first-time buyers, it seems like it should be a game suited in an Evercade collection with other similar shooters but definitely not on its own. 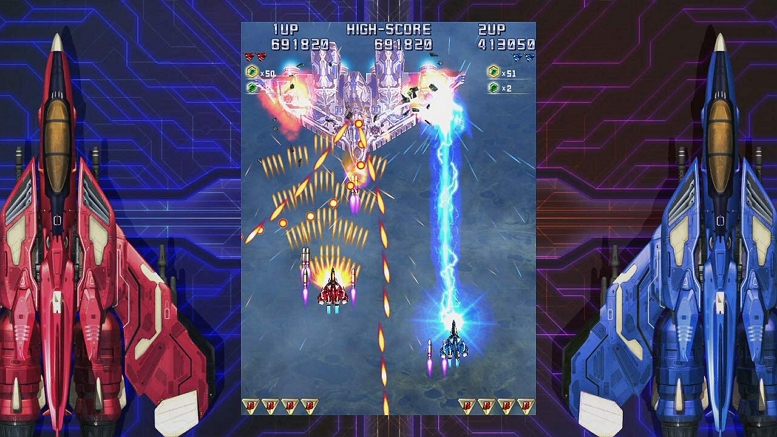 Unfortunately, this review for me really boils down to value for money. For someone who isn’t a hardcore fan of the series but enjoys bullet hell shooters regardless, I wouldn’t buy this unless it was heavily reduced. If I was a fan of this series and bought this expecting something I’d feel ripped off after buying this game a few times before.

In Conclusion, Raiden IV Mikado Remix is a good game that values itself way too high and doesn’t really offer anything new for its dedicated fans. The aged graphics and extremely difficult to along with. I feel that 95% of gamers won’t enjoy this game in my opinion.