“Puts you in mind of the days of the old demon barber of Fleet Street, don’t it? Last night… six of ’em. All in different parts of the city, all mutilated. He must be a real right maniac, this fella.”

But here’s a more important question. Why the ‘eff am I going on about Sweeny Todd anyway? Well, there’s a new game coming soon. A business/cooking sim that is very much influenced by the whole Sweeny Todd story. Ravenous Devils is pencilled in to be released this spring from developer Bad Vices Games and publisher Troglobytes Games and I’m doing a cheeky preview of it right here.

Now, I do have a soft spot for business sims. I have played my fair share over the years, the likes of Theme Park/Hospital, Transport Tycoon, Sim City and so on. These games put you in very normal locales and let you just go ahead and run your business any way you like. The same applies to Ravenous Devils, only the setting isn’t quite as family-friendly.

Manage a tailor shop and corpse-cooking business in a city where crime, corruption and poverty are commonplace. Percival and Hildred have just moved here with nothing but a dream: to get extremely rich.

So you play as both Percival and his wife Hildred who have just opened a tailor and eatery shop. Only the ingredients used for both are not exactly kosher. Just like Sweeny Todd and Mrs Lovett, the dead bodies are used to make the food that you will sell to customers. Not only that but the clothes from the victims can be patched up and sold for profit too. See, Percival and Hildred aren’t all bad, they are well into their recycling.

As this is just a quick preview, I don’t want to go too far into detail as I want to hold most of my thoughts back for a full review later. But in terms of the gameplay, Ravenous Devils is easy and simple. You can control Percival and Hildred who both run their own respective parts of the business. Percival does the tailoring… and killing, while Hildred does the cooking… and mincing up of the bodies. Everything is as simple as just clicking what you need them to do. 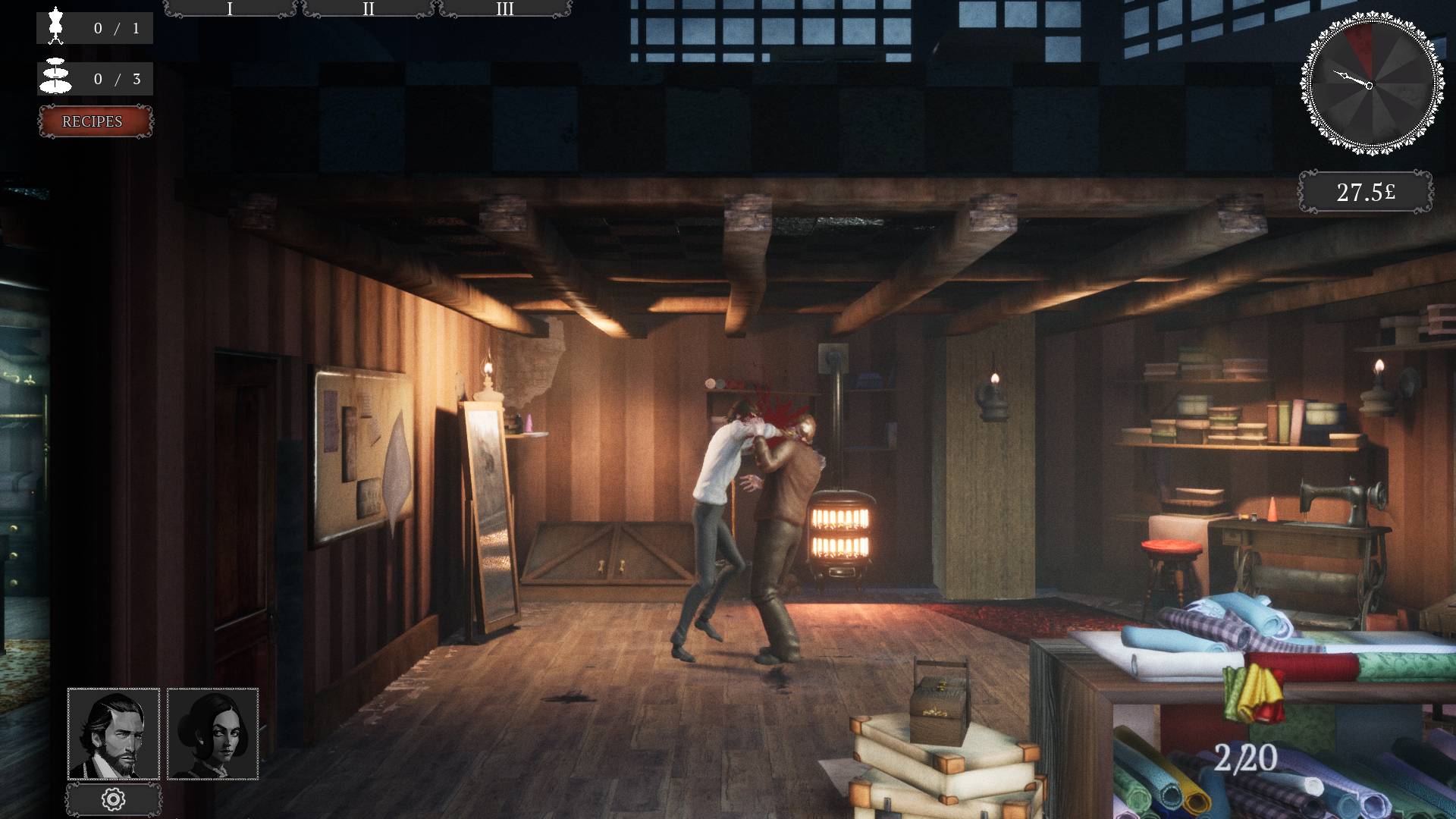 This is a basic rundown of how you turn a human into a pie in the game. A customer comes into the tailor shop and goes to the backroom to be measured up. As Percival, you click on the customer to kill them. You then click on the body to strip it of its clothes and pick it up and then on the chute to drop the body down to the kitchen in the basement. Killing folk leaves a lot of blood so you’ll need Percival to clean it up before another customer walks in. When done, you click on the pile of clothes from the body and use them on the sewing machine to patch them up. Now you have some ‘new’ clothes to sell to customers.

Meanwhile, Hildred is running the other arm of the business. In the kitchen, she picks up the dead body that Percival sent down and puts it through the mincer. You now have some minced meat, so pop that on the work surface and add some flour. Pop that into the oven and you’ve just cooked some pies. Take those human meat-filled pies to the eatery and customers come in to buy them, you make money.

See, it’s basic stuff and a very easy game to understand. Think of it as a much more twisted and macabre version of Overcooked. With that money you make from selling the clothes and human flesh food, you can buy upgrades for your shop. A faster sewing machine, more mannequins to display and sell those clothes. You can buy another oven so you can cook more items, upgrade them so they cook faster. The eatery itself can also be upgraded. Add tables so customers have somewhere to sit and more.

So that is the basics of Ravenous Devils. There’s quite a bit more going on, including an ongoing story, various recipes to discover and plenty of upgrades to unlock along the way. There is a demo on Steam that is worth checking out. The demo just gives you a small slice of the bloody violence and grisly themes of the game but it is just enough to get you hooked. Set to be released this spring on PC and consoles, Ravenous Devils is a game I’m be keeping an eye on and hopefully reviewing fairly soon. Check it out of you feel like being a bit of a Sweeny Todd yourself.