“Way of the Hunter provides a highly immersive, completely integrated experience amongst stunning wildlife with true to live animal group behavior. Witness the changing of complex ecosystems that react and adapt to your input. Learn what it means to be a true hunter and put your skills to the test. Face the challenges of ethical hunting, supported by a compelling story, or simply enjoy hunting the rich environments freely.”

Look, I need to be honest before I start this one. I’m really not the audience for this type of game. I don’t play hunting games and the last time I played anything even remotely similar to this, I think it was Duck Hunt on the NES about 37 years ago. Still, I do like to review something that is outside of my comfort zone, try a genre that I’m not familiar with and broaden my horizons a tad.

Way of the Hunter gets off to a promising start and it surprised me by including an actual story, with you taking over your grandfather’s ranch. Surrounded by a big open-world environment (and wildlife), the ranch can be explored and interacted with. Check out taxidermy displays (which you can add to), there’s a weapons locker and a PC that is used as a shop, to read any emails and more. The game takes you through a basic tutorial covering how to equip guns, attach and use scopes, buy new gear and of course, how to hunt. First, taking you to a firing range so you can get used to squeezing off a few rounds. Then, you are sent out to kill your first live target, a badger.

The game sent me to a hunting stand and told me to shoot a badger, but there weren’t any around. I whipped out my binoculars and scouted the area of where I was sent and nothing. Of course, this is a hunting sim, so I can’t expect the place to be teeming with wildlife targets like I’m playing an action-based FPS title. I have to be patient and wait for my, soon to be dead, badger to appear. So I waited, periodically checking out the area with my binoculars… for about 40 minutes and still nothing. This is still the tutorial remember, you’d think the game would want to get you past the opening ASAP so you could get into the game proper. But no, this wants to drag things out. I get this is a sim, but seriously, 40 minutes of waiting and scouting for a badger?

Anyway, I gave it another 15 minutes and yes, finally, a badger. Only it didn’t scutter across the environment as a badger would do. It kind of stuttered and jerked around like someone playing multiplayer CoD with really, really bad latency issues. How was I supposed to slowly take aim and squeeze the trigger to claim my hunting prize when the little fucker is teleporting around? It did eventually stop and I did get to shoot it and yes, I scored my first dead animal to take my hunting cherry.

Now, to be honest, the terrible frame rates and stuttering are something that I should’ve anticipated. I mean, even during the opening cut scene of your character driving to the ranch, the frame rate dropped several times. If the opening cut scene was too much for this game to handle, there’s no way it could keep up with a small badger moving around. I’m reviewing this on a Series X too, not a console that is two generations old. Plus, I had it set to performance mode in the options.

Oh, before I forget, the jeep. Yes, you have a jeep to drive around in… and it’s a fucking joke. Some of the absolute worst driving controls I have ever experienced. The handling is ludicrous and the jeep turns as if it is glued to the floor, especially at low speeds. Not that you have much choice because it is stupidly slow no matter how much you hold down the accelerator button. Seriously, you can go flat out, fully on the accelerator and the jeep never seems to go over 10 mph.

Before I move on, I do have to bring up the fast travel option. The map is big, really big and fast-travel is a must. You find new fast-travel locations by exploring the map and you can fast-travel at any point when playing. This is my kind of fast-travel mechanic. Not one of those, you can only fast-travel from specific spots things. In the middle of nowhere and want to get back to the ranch? Just fast-travel with no restrictions. Great, I can instantly travel to anywhere on the map at any time, as long as I have found the fast-travel spot. Only, when you do fast-travel, you leave your jeep behind. What (in-game) sense does that make? My character was standing quite literally 2 inches away from his jeep, but chose to walk 5 miles via fast-travel instead of driving? And if there’s no fast-travel location near your jeep or you’ve not found one yet, you’re fucked because you now have to walk all the way back to get the jeep… rendering fast-travel pointless. I wrote ‘fast-travel’ a lot there.

You have this thing called hunter sense which you can switch on at the tap of a button. This highlights any nearby animal tracks, feeding locations, pooping locations and such. Very handy for when out hunting wild animals. However, the second you even move a millimetre, the hunting sense auto de-selects, so you can’t make out the tracks and so on. When on a hunt, you have to keep stopping every few seconds just to check your surroundings and ensure that you are still following the footprints (which are near impossible to see without the hunter sense). It’s just so laborious and time-consuming.

I mean, I spent 4 hours hunting deer and couldn’t even see one, never mind shoot one. I spent ages tracking, using my hunter sense, having to stop every few seconds. I found a nice hunting stand near where the deer (according to the map) are. I even found a few tracks and an eating spot for the deer, around 100m away. Yup, there are definitely deer nearby. 4 hours and nothing. I crawled around the area where the deer icon was, nothing. I waited in the hunting stand for ages, pulling out my binoculars and checking the area regularly, nothing. 4 hours! I know this is meant to be a sim and all (complete with the ability to highlight deer shit via your hunter sense, just like real life?) but it is still supposed to be a game, right?

Check out the following screenshot that I took. It is me looking through my binoculars, supposedly, at a deer.

Right there in the top right corner (highlighted for you), it tells you what you are looking at and shows an analysis of the animal. It says that it is a deer, age, female and it is calm. But there isn’t anything there. I know what you are thinking, the deer is hidden in the trees in the background. Nope. Look at the aiming reticle, I’m not looking at the trees, I’m looking at that open area right in front of me. There’s no fucking deer there. The game is telling me there is a deer there, but nope. Is this a glitch, is the game broken or are the animals meant to be invisible? Perhaps they have the Predator cloaking technology? Are there any animals even programmed into this game other than that one stuttering badger with a poor internet connection that I killed in the tutorial? 4 hours of me trying to try and find a deer that wasn’t invisible. I have other games that need reviewing, I had to give up.

Quick note: aside from that one screenshot of the invisible deer that I took myself and one at the end showing my one and only badger bullet-cam kill, I have had to source images from elsewhere for this review just to show some of the animals… because they refused to spawn in my game.

Coming with a £35 price tag on PC, PS5 and Xbox Series S|X, that really is quite a chunk of money for such a mess. As I said at the very start of this, I’m not the target audience. I don’t play hunting games, so I can’t tell you if this is better or worse than any others on the market. However, I don’t have to play hunting games to know that this one is massively broken. Way of the Hunter is a mess on a technical and mechanical level. Plenty of frame rate drops, stuttering/low latency animals when they do eventually show, or they turn up invisible. Absolutely horrendous vehicle controls, a fast travel system that leaves you stranded with no jeep because the in-universe logic has the character walking long distances instead of driving.

This really is a shame too as I wanted to enjoy this. I really did like the opening of the game, the story and the exploring of the ranch and its surroundings. It even sounds amazing on paper here are some of the game’s features taken from the marketing blurb:

Honestly, just exploring the in-game menu and there is loads of content here. An encyclopaedia crammed with information on everything such as the different guns, bullets, equipable gear, the various animals and their habits. A thorough perk/upgrade system, a taxidermy guide. You can even view a bullet-cam of your kills, or in my case, one jittery badger kill. This thing is amazing and shows the trajectory of the bullet, its impact, the damage it did and more. The bullet-cam itself is fully interactive too, it can be rewound, forwarded, zoom in and out, rotate the camera, etc. Honestly, Way of the Hunter seems to be deeply detailed and really intriguing. But when it comes to the actual hunting in this hunting game, it just does not work. 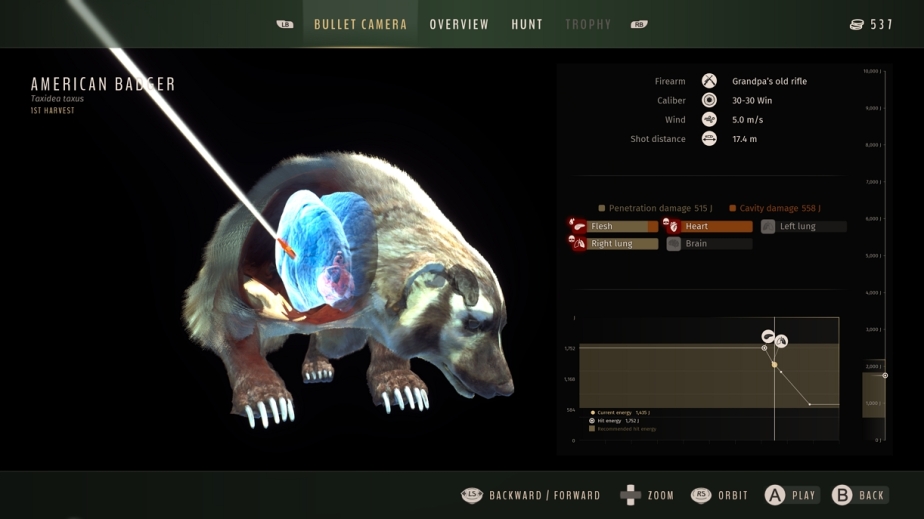 If you want a game where you can drive around in a fucking terrible-to-control jeep and take in the scenery with frame rate drops aplenty (even in performance mode), then this is the game for you. If you want a hunting game where you hunt animals, I’d suggest you avoid this right now, it is just so poorly optimised and broken on a bare basic level. Maybe it’ll be fixed in the future? But as of right now, give this one a miss,  like trying to shoot an invisible deer. And I didn’t even mention the terrible pop-up, textures not loading in and awful graphical glitches, especially when climbing up and down a ladder.