I guess this is a little follow-up from my Land Of The Free article after the Vegas shooting last year.

After the upsetting yet (lets be honest) unsurprising school shooting at Stoneman Douglas High School in Florida last month. ‘President’ Donny T has decided to put the blame for these shootings on violent video games and movies. Anything as long as you keep sweeping the gun issue under the carpet and as long as those NRA donations come in eh Don? Blame any and everything except guns. I mean, yet another school mass shooting so why not put much stricter gun laws in place…or just arm teachers instead. How long do you think it’ll be until another school shooting happens and this time the killer will be using guns already in the school (its going to happen, just wait)?

I already covered just how few of the mass shootings in recent years have been stopped by a gun-toting civilian in my previous article, so why does more guns in hands make any sense? But hey, the answer to mass shootings is more guns apparently. I think one of Trumps next proposals should be equipping firefighters with flamethrowers instead of water to combat fires.

Anyway, back to the point. How is censoring or even banning violent movies and games going to cut down on mass shootings? Let me just get to a very specific point, Trump recently held a meeting at the White House to cover this very subject. He invited people from all sectors to discuss this troubling matter and even had a special collection of clips assembled to show how violent video games are. When I say he invited people from all sectors, there was one missing – scientists who have done extensive research and tests that prove violent games do not make people violent…I guess he just plumb forgot to invite this area of expertise though? Must have slipped his mind.

The Second Amendment is the reason many Americans still believe they have the right to carry guns (something I also covered in my other article). A vastly outdated right written almost 230 years ago. But if people think standing by the Second Amendment is good enough to unnecessarily stockpile guns…what about the one before it, you know the First Amendment?

Congress shall make no law respecting an establishment of religion, or prohibiting the free exercise thereof; or abridging the freedom of speech, or of the press; or the right of the people peaceably to assemble, and to petition the Government for a redress of grievances.

In short –  an amendment to the United States Constitution guaranteeing the rights of free expression and action that are fundamental to democratic government. These rights include freedom of assembly, freedom of the press, freedom of religion, and freedom of speech.

Does this not apply to video games and movies? Do they not have the right to their freedom of expression? You can’t back up the Second Amendment while ignoring the First can you? So its okay to keep putting guns into people’s hands, but not okay for movie/game directors/publishers to express themselves freely? Seriously Donald are you backing the Constitution or ignoring it? Just pick one side or the other.

How about instead of blaming movies and games, Trump looks at the lax gun laws in place, brings in tighter restrictions on guns. Introduce a gun amnesty, like Australia did a while back and where gun crime has dropped? I’m English we have had mass shootings here in the U.K., even ones in schools – see the Dunblane school massacre for an example. Also note that after that particular shooting in 1996 that gun laws were changed and we haven’t had anything like it since. That’s over 20 years of no school shootings for those counting. Don’t get me wrong, we still have gun crime here and even murders by guns – but we haven’t had a mass shooting since 1996. So if Australia and the U.K. can change laws and cut down on mass shootings…why can’t the U.S.? 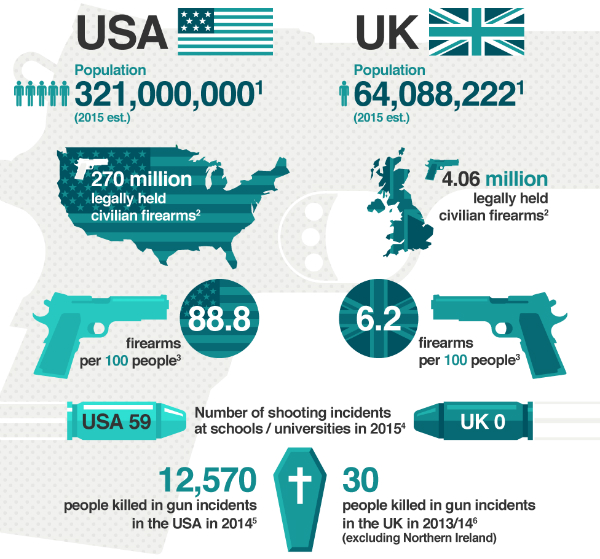 Do me a favor. Load up YouTube and put ‘gun collection’ into the search bar. There’s a mass of videos of ‘proud Americans’ showing of their extensive gun collections, dozens up on dozens of deadly weapons owned by one person. But why and how? Why does the American government allow one person to amass such a stupidly high number of guns? Yeah I know not every American sitting on an small arsenal of guns will go out and murder innocent people – most of them are a kind, caring and quiet. They would never do such a thing…just like that guy who carried out the massacre in Vegas last year.

How many more children need to die before the real issue of gun laws is addressed and changed instead of blaming any and everything else? Its not violent movies or games at fault here, its the stupidity of Americans that think a 227 year old right still holds relevance in today’s modern world, its the fault of the government and especially Congress themselves that just keep burring their heads in the sand while refusing to drastically change laws and modernise a 227 year old right.

The blood of the innocent is on your hands, the same hands that still firmly grip your guns.